It has been around for years and is being implemented more often, especially by Fortune 500 companies like Lockheed Martin. Sciaky’s electron beam additive manufacturing (EBAM), however, is somewhat less well known in the wider 3D printing arena, compared to other metal AM processes, such as Arcam’s EBM process (with which it only shares the use of an electron beam and little else with Sciaky’s technology).

The company has enjoyed most of its success in the US, but it is now setting its sights on the European and Chinese markets for expansion, with new sales partnerships in the works for 2015. So, we caught up with Mr. John O’Hara, Sciaky’s global sales director, to understand more about EBAM’s capabilities and potential.  We discovered that, whatever the future may hold for 3D printing as a manufacturing technology of final parts, very large metal components will still probably be made with the Sciaky system. 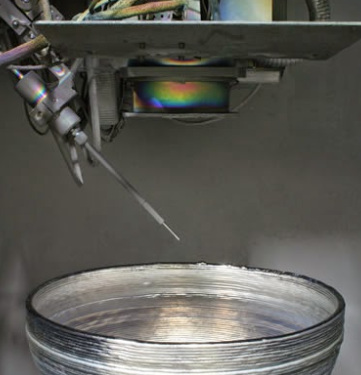 The main difference between Sciaky and Arcam’s use of the electron beam as a power source is that, while Arcam uses it to melt metal powders, Sciaky’s machine takes advantage of welding wire as the printing feed stock. In a way, I guess you could say EBAM works more similarly to a giant metal FDM machine: The EBAM machine creates a bead of metal approximately 10mm wide and 3mm high with each pass of its process. Successive beads are then created adjacent to, or on top of, the previously deposited beads to build the 3D structures layer-by-layer.

“For this reason,” Mr. O’Hara explains, “we are already capable of building structures that are much larger, even up to ten times or more, than Arcam’s and can deposit metal at a much faster rate, once again up to ten times faster, while achieving better metal density. One common benefit that Sciaky and Arcam enjoy is that both processes are done in a complete vacuum, which prevents contamination of the melted metals from gas molecules.”

Electron beams are a highly efficient method for melting metal. Sciaky’s EB guns are capable of generating up to 42 KW of power, which exceeds, by far, even the energy requirements to fuse the highest melting points of metals like Tungsten and Molybdenum. “We are also able to control the focus and direction of the E-beam in a vastly more responsive manner than a laser can be controlled. This allows us to monitor, control, and record our process, resulting in the most consistent results,” says O’Hara.

The maximum capabilities of Sciaky’s 3D printers in terms of size and speed are undeniably impressive. The process can deposit as much as 10 Kg of metal per hour, depending on the alloy and the geometry of the part being deposited. The size is only limited to the dimensions of the vacuum chamber that Sciaky builds for a specific job, with the current, largest-capacity machine capable of building parts up to 7.2m x 1.5m x 1.5m. That’s about as long as a small bus!

While the typical size of a layer, thus the resolution for Sciaky’s processes, is 10mm wide and 3mm high, it is possible to provide narrower widths and thicknesses.  The highest resolution reached, as of now, is set at 1mm wide and .3mm thick. This is fairly impressive, considering that the company is able to work with all metal that can be autogenously welded – that is, metal that can be welded to itself – and that is available in the form of a wire. The most common among these are Titanuim, Nickel alloys, Tool Steels, and Refractory Metals, which are commonly used in aerospace structures, propulsion systems, drilling and mining tools, power generation, medical, and semiconductor industries. That is pretty much every sector where AM is seriously taking hold.

Naturally, there are only a few companies that can currently justify the production capabilities and multi-million dollar investment for an EBAM system. In the EBAM’s first years, Sciaky – which is already an established manufacturer and provider of high-end welding services – used its AM machines in-house. The company currently employs two systems internally, with a third system being built for service in Chicago starting in July 2015. In the past year alone, Sciaky has run over $1 million in prototypes, production, and research to outside institutions.

As the market’s demand for AM has grown, Sciaky has begun selling its systems to external companies in July of 2014. It has since sold three machines to the public market as of this date. “Our most common model is the VX-110,” Mr. O’Hara tells me, “and and we have four other standard models. Our engineering group can also customize our machines to suit any application.”

Similar to the main objectives of other AM machine manufacturers, the current goal for Sciaky is to ensure process control, something that is key in convincing more manufacturers to embrace these new methods of production. “We will continue to make improvements to our process control system, which we have defined as Closed Loop Control or CLC”, says O’Hara. “It been in use since 2010, and we are continuously improving it.

The CLC utilizes an optical camera to view the molten pool of the build area, make direct measurements of the pool geometry, compare to “set point” and adapt critical power and deflection parameters to maintain the set point. This carries several benefits, such as assuring consistent layer geometries, metal properties, metallic structure, and metal chemistry. Furthermore, it allows for a more automated process control and automatic acquisition and recording of all process variables.

If you are going to 3D print a small bus you are likely to need as many guarantees as you can get on the process’ reliability. Although it will still take some time, as 3D printing moves more and more toward manufacturing of final products, I personally cannot wait to see an entire bus come out of one of Sciaky’s machines.