With the help of Her Majesty the Queen of the Netherlands, Máxima, Dutch 3D printing technology provider MX3D has unveiled the country’s first 3D printed stainless steel bridge in the heart of Amsterdam.

In the pipeline since 2015, the sci-fi-esque ‘MX3D Bridge’ was fabricated using the firm’s signature Wire Arc Additive Manufacturing (WAAM) technology, a form of robotic arm-based directed energy deposition (DED). The 12.2m-long structure has now been placed over the Oudezijds Achterburgwal, one of the oldest canals in the city’s red light district, and is ready for use by pedestrians and cyclists.

The Bridge was designed by Joris Laarman Lab, while civil engineering firm Arup took on the role of lead engineer. Funding by the Lloyd’s Register Foundation was also integral to the completion of the project, along with additional efforts from industry leaders such as ABB, Air Liquide, ArcelorMittal, Autodesk, AMS Institute, and Lenovo.

Tim Geurtjens, co-founder of MX3D, said, “A few years ago, we came up with the idea to use the robotic 3D metal printers that we developed to print a functional full size steel bridge. Together with the excitement of this crazy idea also came the realization that there was no way we could pull this off alone. For a complex and crazy project like this to succeed, you need many smart and enthusiastic people.”

MX3D’s proprietary WAAM software technology is designed to integrate with off-the-shelf industrial robots and power sources, transforming them into metal 3D printers. With the aim of showcasing this technology and exploring how digital tools can shape the architectural world, MX3D 3D printed the Bridge between 2017 – 2018.

The project involved the use of four industrial WAAM robots working in unison to 3D print over 6,000kg of stainless steel. Since being placed in the city, the MX3D Bridge has been granted a two-year permit by the City of Amsterdam. The design itself was created using generative design and topology optimization tools, resulting in the final, nature-inspired form seen today.

Gijs van der Velden, CEO and co-founder of MX3D, adds, “When we started with the concept, the Bridge was more than 100x bigger than any part ever 3D printed in metal, and now that it’s finished I still have good reasons to believe the bridge will remain the largest metal printed object for years to come. The Bridge is only the beginning for our technology.” 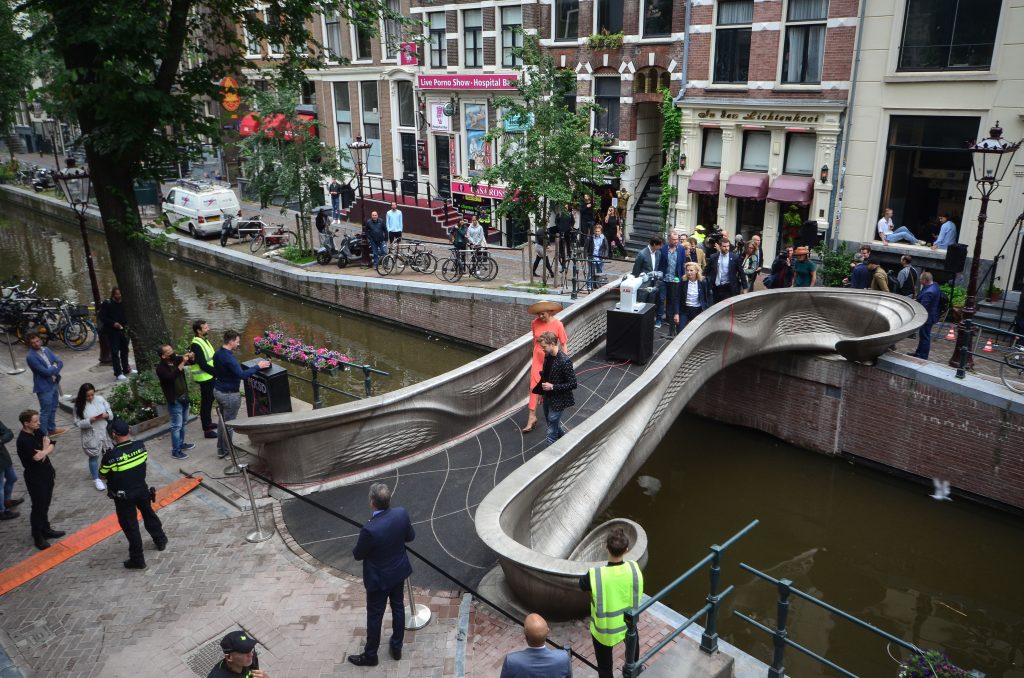 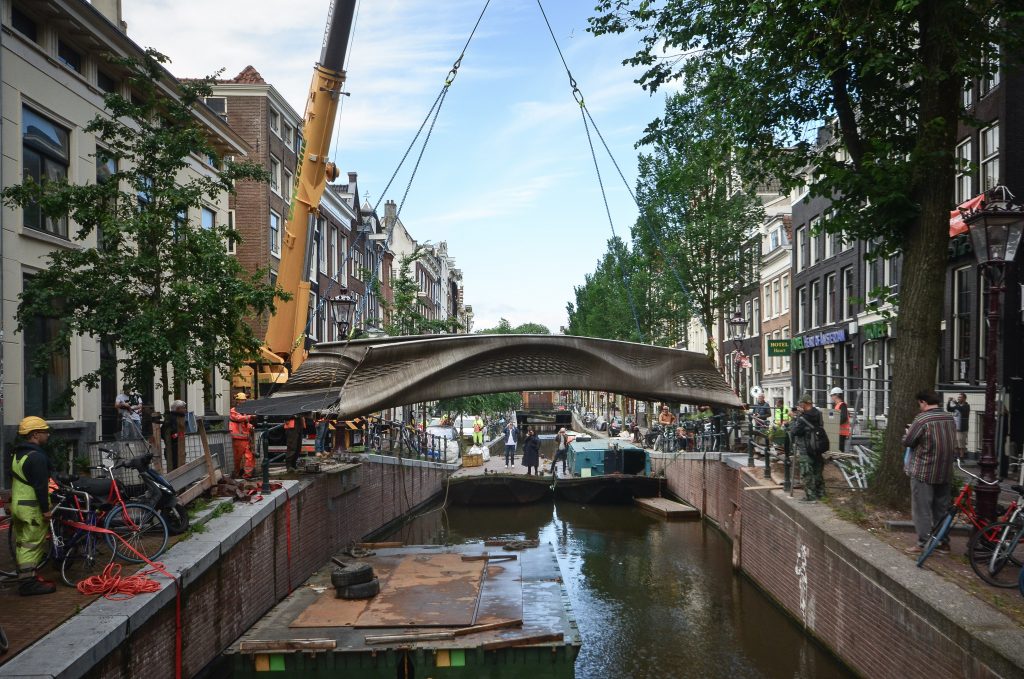 A living laboratory in Amsterdam

Though it may not be so obvious from afar, the 3D printed bridge is actually designed to be a ‘living laboratory’ too. With the help of The Alan Turing Institute (the Turing), Arup, Autodesk, FORCE Technology, and the University of Twente, MX3D was able to integrate an extensive network of smart sensors into its 3D printed bridge, enabling the creation of a digital twin.

The real-time data from the sensor network will be used to drive a research project led by the City of Amsterdam, whereby the role of IoT systems in the built environment will be explored. Structural and environmental measurements such as strain, rotation, load, displacement, vibration, air quality, and temperature will also be used by engineers to monitor the bridge’s health and changes over its lifespan.

Alex Tessier, senior principal research scientist at Autodesk, concludes, “Extending our partnership with MX3D has provided Autodesk a platform to test and develop our IoT digital twin technologies to help MX3D make its bridge the most advanced smart structure in the world in its design, creation, and use. This project with MX3D has brought together an amazing team of experts and together, we are exploring the cutting edge in smart infrastructure and what it means for sustainability and growth within our cities and beyond.”

The year 2021 has delivered several milestones when it comes to 3D printed infrastructure. Earlier this month, China’s first 3D printed retractable bridge was unveiled in Shanghai, and it’s capable of unfurling in less than one minute. Weighing just 850kg and spanning 9m long, the Bluetooth-controlled bridge is located in the city’s Wisdom Bay Innovation Park, and comprises 36 3D printed triangle panels.

Elsewhere, in April, construction firms BAM and Weber Beamix began building the world’s longest 3D printed concrete pedestrian bridge in the Netherlands. Simply named ‘The Bridge Project’, the initiative is being commissioned by Rijkswaterstaat (the Dutch Directorate-General for Public Works and Water Management), and stands at an impressive length of 29.5m (almost 97 feet).