Mcor Adds a Plus to its Matrix 3D Printer

At the recent TCT Live 2012 Exhibition, Mcor Technologies, a company that manufacturers the only line of paper 3D printers in the world, launched an upgrade of its Matrix 3D printer — the Matrix 300+. I caught up with Deirdre and Conor MacCormack, husband and wife founding partners of the company, at the show to find out more about the ‘plus’ and what was going on at Mcor.

In terms of this latest launch — the plus comes courtesey of making the Matrix 300,  (a low cost, high quality, eco-friendly 3D printer) three times faster. 3D printing speeds, particularly for quality parts, can be an issue for many, but the guys at Mcor are aware of this and have focused on improvements in this area. The Matrix 300+ has been re-designed to enable a faster turnaround on part production and so in turn put even more parts into more hands — at no extra cost. Mcor has implemented a Selectable Layer Thickness (S.L.T.) technique that allows the Matrix to run in two different modes, draft or presentation — so essentially it will still take longer for higher resolution parts, but it’s getting better.

Furthermore, The Matrix 300+ is also sold with enhanced software that reduces overall build time and simplifies the ‘weeding’ process. Another development by Mcor is a new technique for the Matrix called V.V.D. or Variable Volume Deposition. This technique enables the production of more complex parts that are even stronger and more durable. According to Conor (CEO), a great advocate for the technology, the improvements are all about “delivering even more value for engineering, education, AEC and packaging design applications.”

For Mcor it is all about providing sustainable and accessible 3D printing solutions. The Matrix is the only 3D printer in the world that uses low-cost, eco-friendly A4 paper to print in 3D. And people respond well to this, existing users include the Royal College of Art, Florida State University and KCI Medical.

The company is flourishing, and I am not at all surprised, as their ethos in a rapidly expanding market place is genuinely one of engaging and democratising. The company has recently expanded its operations on all fronts with a move to a new HQ facility in Ireland, a second office in the US and some new key staff, including, I am delighted to say, Julie Reece, previously of Zcorp.

There was no sign of the Mcor IRIS full colour 3D printer, which the company announced earlier this year. I was told this will be lauched soon, before the end of the year. Which I guess means they are saving it for Frankfurt! I am really looking forward to seeing that one, its slated as printing in full 600 dpi colour. 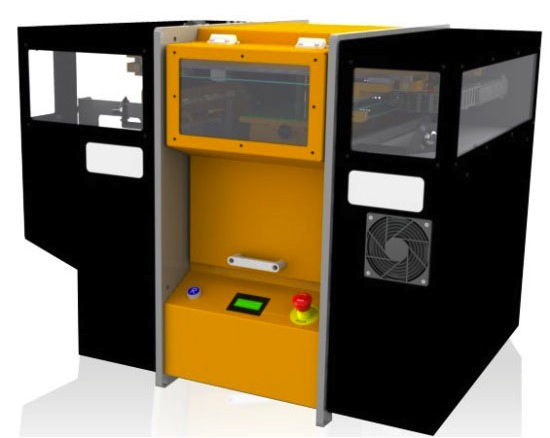