Makerbot had a very busy first full day at CES  (the Consumer Electronics Show) yesterday. The images and info streaming down the wires from Vegas overnight suggest that, in typical style, Bre Pettis and his team are pulling in the crowds. 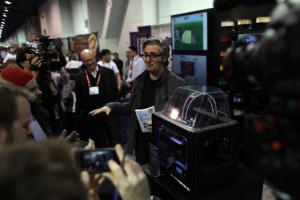 With a number of announcements and particularly the unveiling of the Replicator 2X, hoards of people and cameras surrounded the stand as Bre himself pulled off the cover. This is an experimental version of the Replicator 2 and we knew it was coming because it was announced last September when Makerbot introduced the Replicator 2. The Replicator 2X however, comes with two extruders — dubbed Dualstrusion — and a heated build plate.

According to Makerbot though, Dualstrusion is the key to unlocking the power of 3D printing for “daredevils and experimenters to explore the frontiers of 3D printing.” Or as a tweeting onlooker, Barry Schuler, put it, “the Rep 2X is positioned for the ‘Special Forces’ of makers”. These daredevils will require $2,799 if they do want the Replicator 2X on their desks or in their sheds however. The benefits of dual extrusion include two colour printing, printing with a dissolvable support material like PVA, varying densities of printed parts, simultaneous dual printing and variable resolution.

The other thing of note is that the Replicator 2X is optimized for printing ABS filament material. 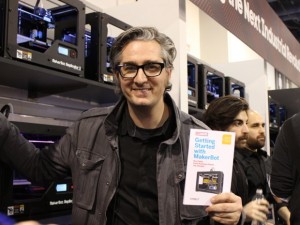 Other announcements from Makerbot yesterday included an update to Thingiverse — the 3D model sharing site hosted by the company. Thingiverse 2.0 seems to have got the thumbs up, and incorporates a new API allowing third party developers to access the site’s capabilities and MakerBot Customizer, of which Bre reportedly commented , “I look forward to seeing all your heads explode.”

And finally, as if he hasn’t been busy enough, there were also signed copies of Bre’s new book available at CES. Entitled ‘Getting Started with Makerbot’ it’s obviously targeting the non-daredevils. My hope is that I will get a review copy soon, which I will obviously share here on 3DPI.