Kickstarter Money Pouring In For Form 1

Buzz surrounding the just announced Form 1 3D Printer is not limited to just general media hype – the concrete demand for the innovative 25 micron layer capable device is also evident. With still almost a full month of pledging time remaining on Kickstarter, the top contender in the rapidly evolving game that is the 3D printing prosumer market has gained backing from a total of 652 individuals totalling a substantial $925k — after just 2 full days.

The initial pledge goal of $100k was reached in a matter of hours, which communicates unprecedented interest from a wide audience in this technology sector, together with demand for a reliable, low-cost system that produces quality parts. Whether this marks the point in history where we do see a paradigm shift in the general consumer behaviour — where the 3D printer is in fact the next centerpiece of each design oriented person’s lounge or family room, leaving those recently mounted 4K UHDTV’s on the wall crying for attention — remains to be seen, but regardless, this is a turning point. 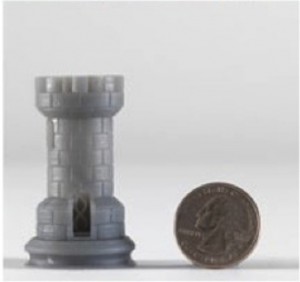 Pledging substantial amounts has given the backers a good place in the queue, along with the desirable status amongst tech savvy and design oriented people – that of a true early adapter. The first domestic American shipments of Form 1 are scheduled for February 2012, which were confirmed and secured for the professional users and aspiring fabbers alike by pledging either $2,299 or $2,499 – the more inexpensive option being for a place first in line and the higher for the silver place. Not surprisingly, being a part of either of these groups is no longer an option, as they are both already sold out. The same story goes for the international package, which requires a pledge of $2,999, (this does not include shipping).

There is still hope, though, if you live in either of the North American countries and delivery for March 2013 is acceptable. This option requires spending $2,699 on your choice of plastic payment. But if the waiting time does seem like an eternity, other options are also available around a similar price point. The trade-off for the immediate delivery does however mean that the accuracy of 25 microns is downgraded to a still very detailed printing paper thick 100 microns, but you can also save a bit in the process – the competing Replicator 2 can be yours for $2,199.

Both the Form 1 and Replicator 2 are of course cutting edge technology and the respective vendors are very serious about taking over the booming prosumer market for 3D printers in the upcoming year. It will be very interesting to see which one comes out on top. The competition could get fierce. Maybe there is a big enough market for both to succeed. Whatever the case, we should start to get greater clarity in the next few months, so stay tuned, as we will be sure to cover the stories and keep you updated on all of the latest news in the 3D printing market.