Due to the comparatively lower cost of production, rapid prototyping and efficiency in design, 3D printing is already making a mark at different industries such as aerospace, automotive and manufacturing of industrial equipment. However, scientists and researchers have taken 3D printing technology further by introducing it in medical sciences. Today, many bodily implants such as dental crowns, dentures, prosthetic limbs, hearing aid ear buds and even 3D bioprinted organs are being produced. The newest addition to this scene is the 3D printed aortic valve that could potentially reduce many complications, especially from transcatheter replacement of the aortic valve in patients. This will prove to be a new dimension in the application of 3D printing in the healthcare sector.

At University of Seattle, Washington, the Department of Radiology researchers are busy perfecting the technique of 3D printing models of aortic valves that could potentially help to reduce the risk factors and complications of transcatheter aortic valve replacement or TAVR. This would prove helpful for thousands of patients who are suffering from aortic stenosis. TAVR is set to become a safer alternative to more invasive and extreme surgical methods. This procedure is comparatively non invasive and involves repair of the valve without the actual removal of the damaged part from within. A replacement valve, which is fully collapsible, is delivered to the site through a catheter. This process is similar to the placement of a stent in an artery.

Even though TAVR is a relatively safe method, chances of complication occurrence still remain. One of the major problems can occur with paravalvular aortic regurgitation or PAR. This can take place when the inserted prosthetic valve does not fit correctly or due to failure of achieving the circumferential seal. It is still a difficult task to determine the exact size of prosthetic valve due to the fact that the aortic root is still a complicated area in the anatomy of humans. The aortic root can come in various sizes and shapes; hence doctors often find it difficult to determine the accurate size.

Today, transthoracic echocardiography (TTE), cardiac CT or transesophageal echocardiography (TEE) are methods used to measure the aortic valve in patients. These methods of imaging are effective only to a certain degree as the images produced are in two dimensions- thus not a hundred percent effective or accurate. The researchers at the University of Washington, however, took a hypothetical novel 3D printed aortic valve model that could be used to help physicians determine the perfect size. This would also help them to accurately predict how specific aortic valves would react to being a prosthesis of certain shape and size. Another factor it can determine is how prone to the risk of PAR a patient is in post procedural conditions.

To test out the hypothesis, the team of researchers conducted an experiment which involved testing the effectiveness of 3D printed aortic root models. Eight patients were identified by lead author and resident of radiology Dr. Beth Ripley during the course of the experiment. These patients have all experienced post TAVR PAR. Then these patients were matched with eight similar patients in terms of sex, age and implanted valve size. This new set of patients did not undergo the PAR complication after they had undergone TAVR. Those who assisted Dr. Ripley were Michael K. Cheezum, Tatiana Kelil, Marcelo F. Di Carli, Alexandra Goncalves, Mike Steigner, Frank J. Rybicki, Ron Blankstein and Dimitrios Mitsouras. Their research paper documented the findings of their experiment and results, which was published in the Journal of Cardiovascular Computed Tomography. 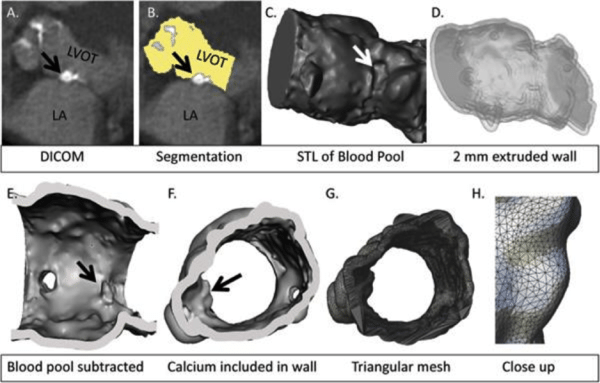 For all the patients, some imaging data were obtained before stereolithography was done. According to the obtained imaging data, a 3D printer prepared some flexible models of the aorta. The hard plastic valve models were made by a material extrusion 3D printer. In order to make sure that each 3D printed aortic model was of the perfect size, the measurements were compared with the ones obtained in cardiac CT scan images.

When all the models had been printed out and assembled accordingly, a clever method of assessing the risk of PAR was employed by the research team. First of all, the aortic valve models of the patients who suffered from PAR were given their 3D printed models of unsuccessful implants that triggered the problem. A simple technique of photography was used by the researchers in order to detect the light being projected through the outflow tract of the left ventricle. This is a sure indicator of PAR taking place. The same process was repeated with the PAR free patient set with the implants assigned to them. In this case, little or no light emitted through the models.

In this case, one out of eight control patients was susceptible to PAR; hence the tally of sufferers of PAR rose from eight to nine. Hence it decreased the number of control patients from eight to seven. Out of nine patients, the light transmission test can successfully identify PAR in six patients, which is a 66% success rate. It also excluded PAR in five out of seven patients, being 71%. The accuracy of the tests in general is very promising for the research team as it implies that doctors of the future could in fact make 3D printed models of human aortic valves and other potential implants ahead of undergoing the TAVR procedure. In any case, if the light transmission test failed and indicated a potential risk of PAR, the patient and doctor could consider other treatment methods. If the test does not indicate any PAR risk, then the doctor could be sure of the appropriateness of the procedure for the said patient.

This technology of creating rapid prototyped models of aortic valves could potentially be life saving for thousands of patients who have experienced complications or have every chance of experiencing PAR during the TAVR procedure; opening new doors for researchers in this field. The research is a significant development in the medical procedures of aortic valve replacement, which could be valuable for the future.

Ronan Ye is the founder and managing director of 3E-RP which is one of China's leaders in rapid prototyping and 3D printing. Upon completing his college degree at Guangzhou University in International Business with honors, Ronan has been heavily involved in China's fast growing rapid prototyping and manufacturing industry. He really has grown up in and with the industry here in China learning about it at a young age. Hence, his knowledge of the overall industry is second to none and hence why many global companies like BMW, VW, and Lamborghini rely on his technical as well as design expertise.