Zeus was introduced (via Kickstarter) as the first 3D printer that incorporates 3D scanning, 3D copying and even the ability to receive 3D files via a fax signal into one machine. With its simple UI and single push button functionality the Zeus is hoping to be as indispensable as the standard 2D all-in-one printer currently is to the modern office. 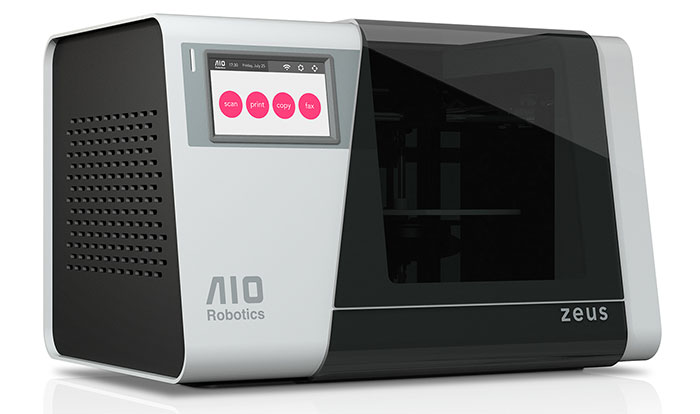 After easily meeting and exceeding its $100,000 Kickstarter goal in less than a day, Aio Robotics wasted no time in putting their 3D printer into production, and according to their Kickstarter timeline they’ve even gotten it there a few months early. The Zeus 3D printer was promised to be delivered by July but as of today it is available for purchase and carries a price tag of $2,499.

The machine is aimed directly at office and school environments, where potential users are often scared away from 3D printing because of the reputation that many machines have for being notoriously fussy. Part of that is that a lot of new users simply don’t understand the realities of working with emergent technology. But a more realistic reason that 3D printers have this reputation is because, frankly, it has been well-earned. While that may be expected seeing as I have shirts older than modern 3D printing, if traditional 2D printers had failure rates of 20% we’d still be using carbon paper to make copies. We can’t blame this fussy reputation completely on user error, especially since good product design is supposed to eliminate the possibility of it, not make having to overcome it part of the process. 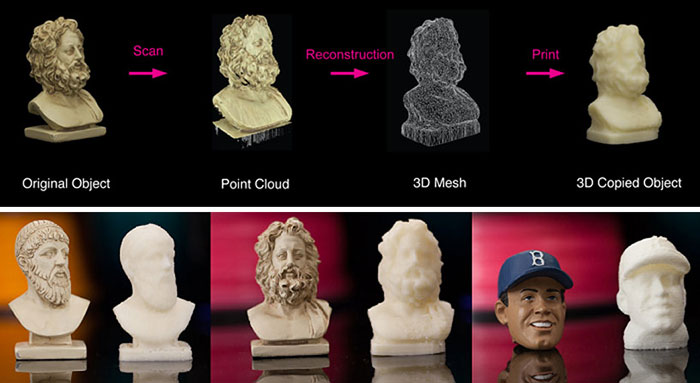 Los Angeles tech firm Aio Robotics promised a lot in their Kickstarter campaign for the Zeus platform, but the most exciting was the claim that their entire machine will be completely automated and require very little pre-printing calibration. Thanks mainly to the incorporation of a self-levelling printing bed and integrated AI that can detect potential printing errors and automatically correct them, Aio Robotics has promised a machine that is as simple to use as the 2D copy machine currently in your office. It remains to be seen how truthful that claim is going to be however. We’ve been promised hassle-free 3D printers before only to have our hopes dashed by the realities of current technology and manufacturing techniques. 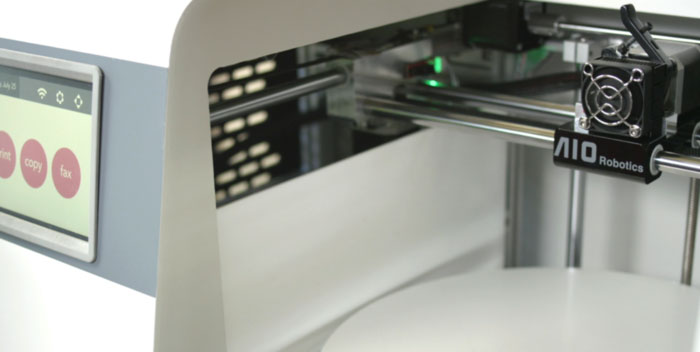 But there is no denying that if the Zeus can do half of what it promises it is a huge leap forward for the 3D printing industry. I’m particularly impressed with the 3D fax feature, which allows you to easily share 3D printing files directly from Zeus to Zeus. That means prototypes and other 3D files can be sent to any office anyplace in the world that has another Zeus via a simple fax transmission. You can even scan an object and fax it directly over to another printer in a different location without having to render and print it yourself first.

The Zeus certainly looks and feels like a standard office appliance that would easily fit into any typical office environment. It sems easy to use for those of us without engineering degrees and versatile enough to have multiple uses, making it a more valuable office equipment purchase. If you’d like to learn more about the Zeus, or pick one up for your office or school head on over to Aio Robotics store.