While industrial 3D printing takes the lion’s share of analysis from industry consultants, the desktop 3D printing world can provide key insight into the state of the technology, transforming communities like 3D Hubs and Ultimaker’s YouMagine into a wealth of information on prosumer 3D printing.  3D Hubs, in turn, publishes regular trend reports and its 2015 3D Printer Guide chock full of info from their distributed manufacturing network.  Now, YouMagine has published the results of its own survey, conducted with 501 respondents from their 3D printables community and the results are illustrated with some really awesome infographics designed by Alexey Butakov. 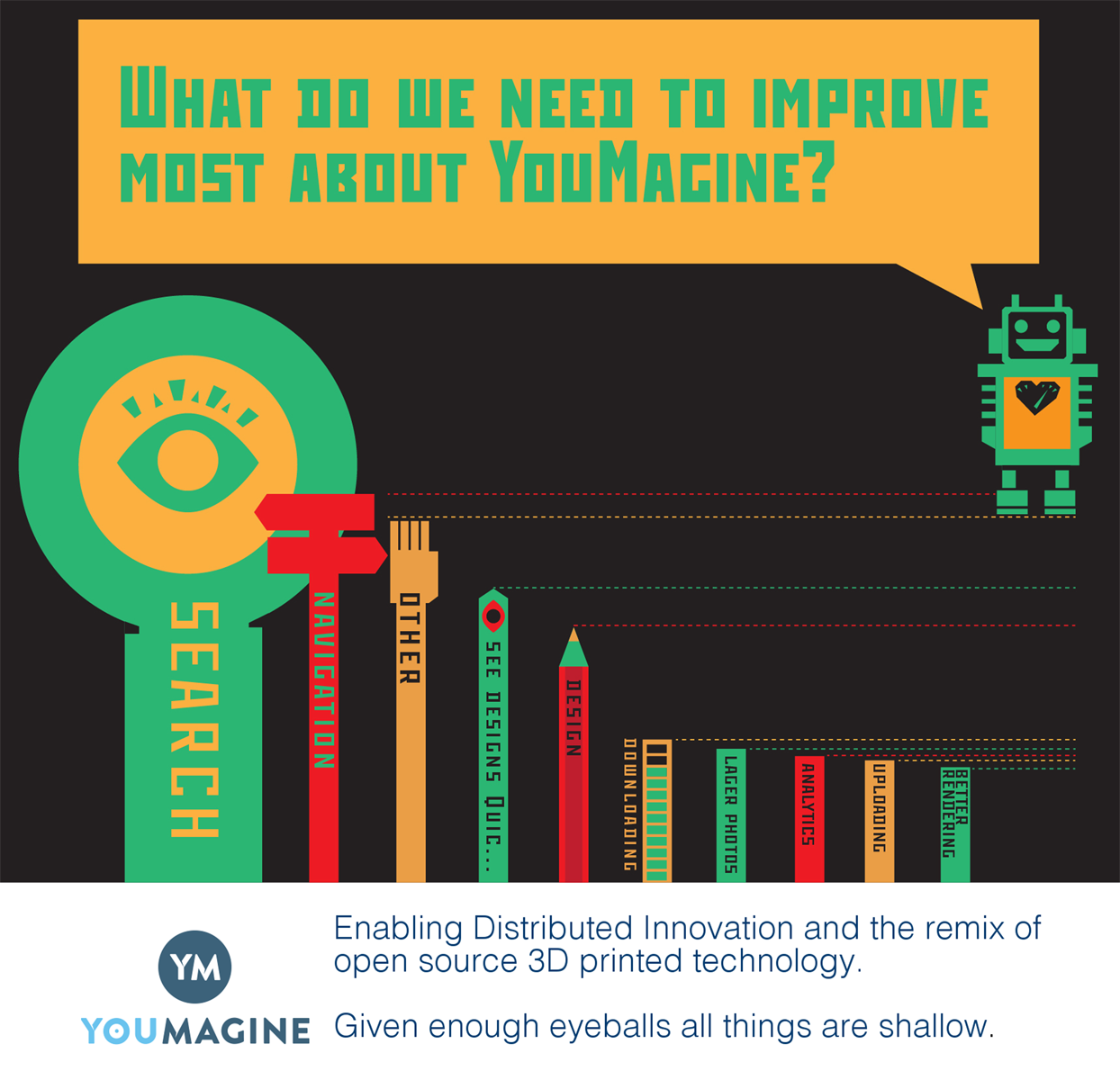 3D Hubs’ Trend Reports continuously suggest that Ultimaker is the dominant desktop 3D printer brand in Europe, though the YouMagine survey suggests that 48% of its respondents hailed from the US, as did Google Analytics.  Many of the rest surveyed, however, did hail from Europe, specifically Germany, the Netherlands, and the UK.  And, while the survey revealed some important features of YouMagine that can be improved, such as the site’s search and navigation, it also revealed what users want improved in their 3D printers, regardless of brand. 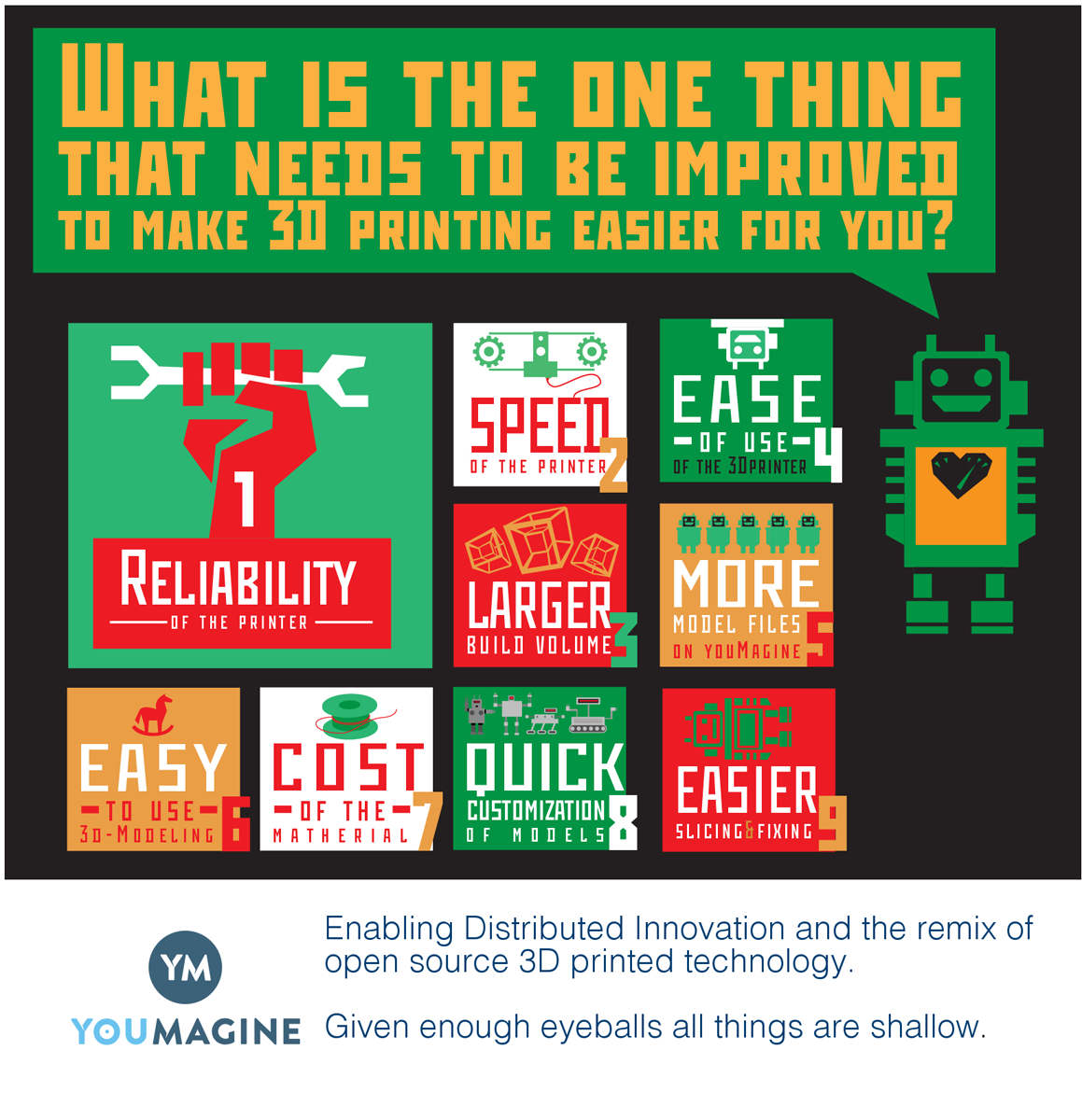 The above graphic illustrates the issues seen with 3D printers ranked from most important to least: reliability, speed, ease-of-use, build volume size, and several more. YouMagine community manager Joris Peels points out that some of these issues are specified, saying that reliability encompasses bed adhesion and the refined use of new materials, as well as a need to improve software, electronics, materials, and machines, all of which will need to be worked out together. He also points out that “Cost is not an issue for many.”

It’s in the third installment of their survey review that YouMagine really starts digging up some interesting stats. For instance, Joris writes that a lot of their members use 3D printing pretty regularly, with 34% of our community use their 3D printer daily, 50% four times a week, and only 11% rarely. And they average about 21 3D prints per month, which is substantial, and, as Joris points out, for those who use it often, “the 3D printer is not a toy but rather a tool that they use continually.” 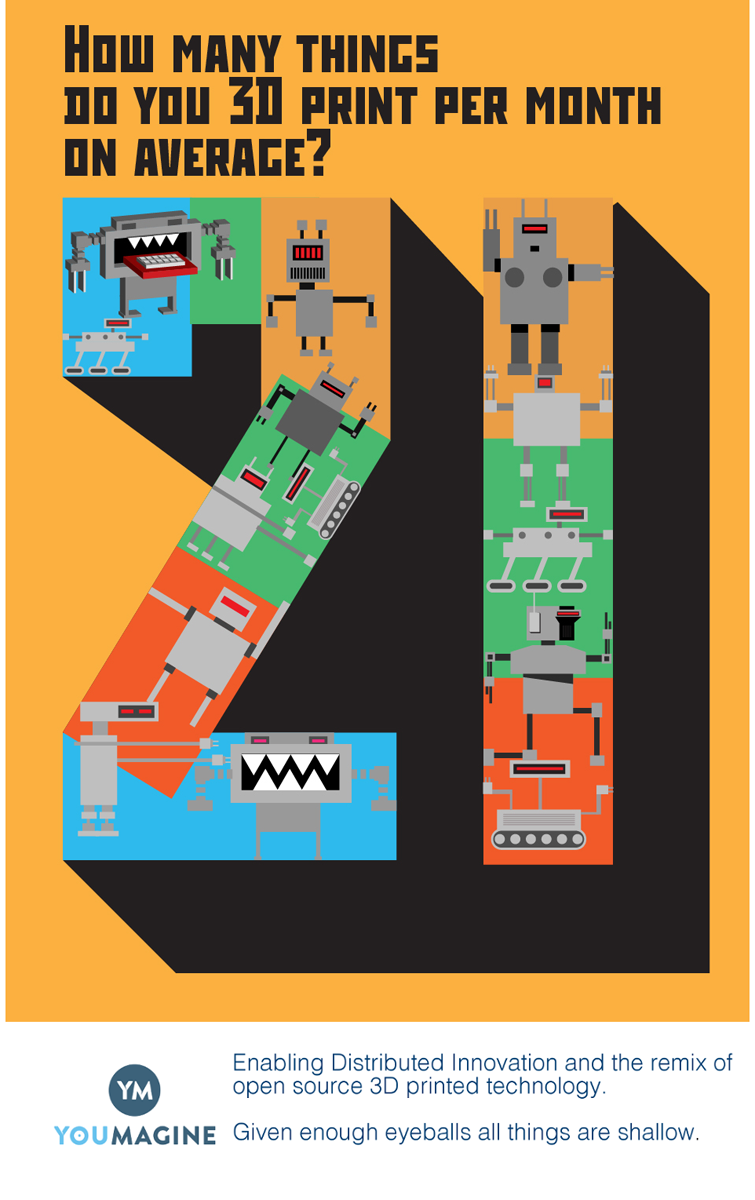 The survey also found that 58% of respondents use Ultimaker’s own open source Cura software, 23% use Slic3r, and 10% use Simplify3D. While 3D Hubs own trend reports usually indicate that their 3D printing network often prints prototypes and scale models, more than other items, YouMagine found that the most popular category of prints is household items, such as hooks, housings, repairs, and enhancements. Joris writes: 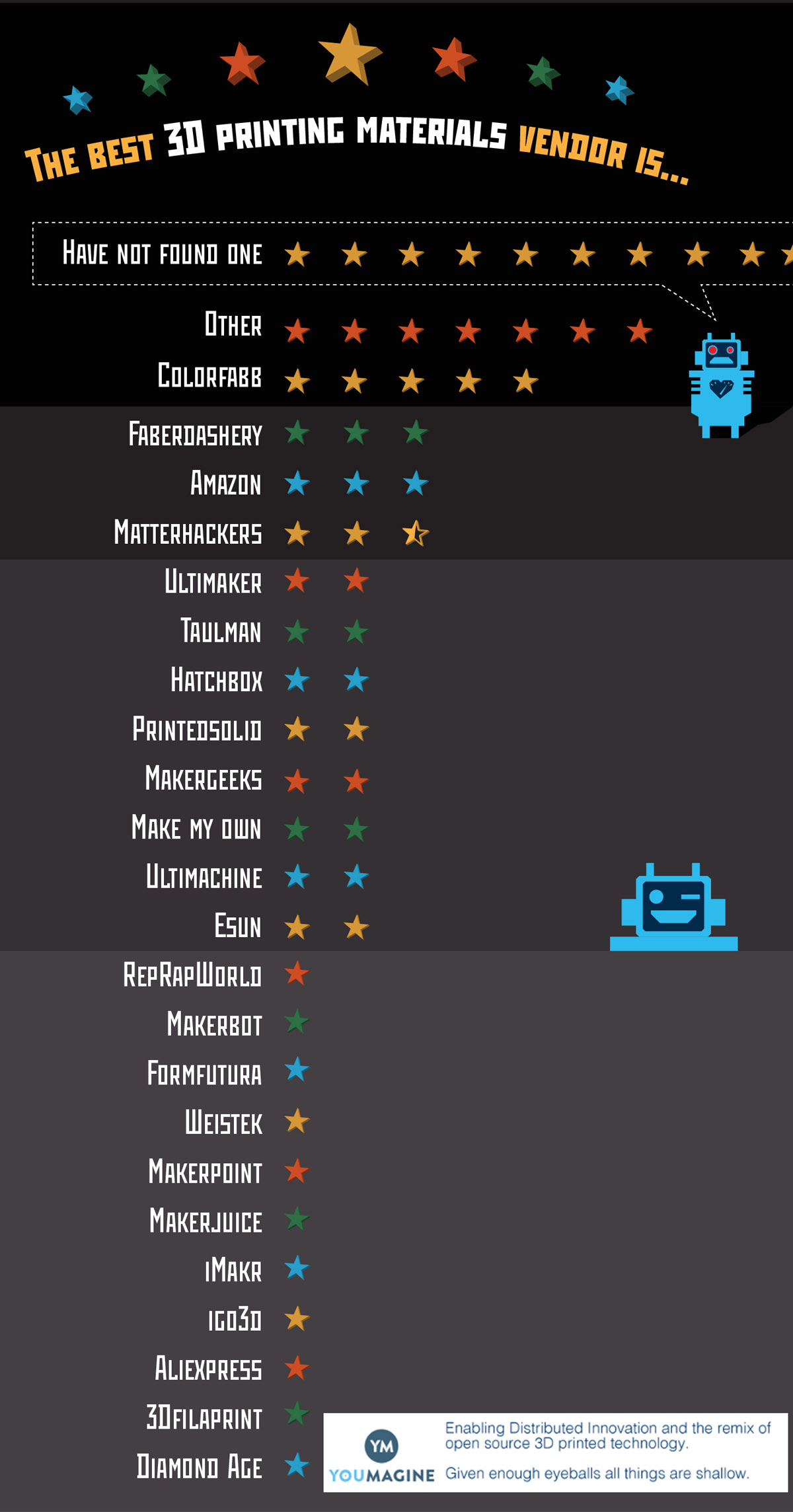 We see a lot of very practical things on YouMagine from enhancements for Ikea furniture, solutions for organizing tools, kitchen paper holders, table cloth clips, hooks, organizers for batteries and cradles for electric toothbrushes. Enhancing your daily existence with 3D printers to organize your life may not be what gets the headlines but it is what a lot of people are actually using 3D printers for. The second most popular item is 3D printer enhancements. We see a lot of things on the site from practical spool holders, to a camera mount for the Robo3D, Ultimaker fan mounts, calibration tools for Kossel’s, bearings,, CoreXY brackets, a turntable for your printer, Printrbot extruders, to complete 3D printers such as MonkeySh#tFight, the iTopie and the Spatial One. Those most interested in 3D printing are very often interested in improving their own printers and sharing the results.

For the full survey results, head over to YouMagine and read posts 1, 2, and 3 here.