What will LEGO do with 3D Printing?

It is the one million (actually more likely to be a few billion) dollar question: how is LEGO going to exploit the possibilities offered by 3D printing? The Danish company has always proven itself capable of reinventing itself. Even at a time when video games and interactive toys began to challenge its business, it reacted by embracing the new technologies, and, instead of suffering from the new competition, it grew exponentially through it.

Its video games sold millions of copies and its digital activities, such as LEGO Digital Designer (which is basically an advanced 3D modelling program for LEGO bricks) flourished. However, 3D printing poses the biggest challenge LEGO has ever had to face. By opening up to a digital marketplace for its models it will expose itself to the same risk of digital piracy that hit the content industry (music, movies, video games and software). And yet digital distribution of its toys could open up enormous new business opportunities and allow it to reach new potential customers (as it did for the content industry). 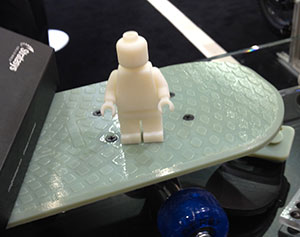 So will it be a risk or an opportunity? “We welcome fair competition, which we believe is good for us, the consumers and the toy industry as a whole”, says Roar Rude Trangbæk, LEGO Press Officer, External Media Relations. “But when it comes to unfair competition, we have always, and will continue to protect our copyrights, trademarks, patents and/or intellectual properties. This means that we monitor how 3D printing is used commercially, and we will take any actions necessary to safeguard these rights – also in order to ensure that consumers are able to distinguish when they buy a high quality LEGO  product – and when they are  buying something else.”

Naturally this will have a strong impact on pricing policies that, as it stands, are a bit high for LEGO toys, as they were for music, movies and videogames before the Internet. Resisting may be futile and LEGO will certainly find the best way to make 3D printing a resource rather than an issue. “We believe that 3D printing is a very interesting technology – added Trangbæk – which is also well known by the LEGO Group. For example we are using different types of 3D printing to develop prototypes for new LEGO elements.”

However LEGO is not about to get into direct manufacturing through 3D printing any time soon. “Currently we do not see 3D printing as a viable replacement for the moulded LEGO elements of today due to the fact that we have very strict demands for the quality, durability and safety of our products, and 3D printing does not currently live up to these requirements. In addition there is a high production cost involved, which currently does not make it commercially viable for us – except for prototyping purposes. In 2012 alone we moulded more than 45 billion LEGO elements.”