Werner Berry, who has been working on his own 3D printer with a classical naming scheme – the BerryBot 3D – has shared a quite novel concept to extrude the filament, demonstrated with a humble screw on his Youtube channel. With Werner’s idea – fundamentally driven by the need to place the stepper motor vertically – the main difference to a standard set-up is to replace the conventional gear driving the filament with a screw, which then acts as a worm gear.

This approach has some advantages over the more traditional filament feeding solution: the functional part of the screw is completely and constantly attached to the filament compared with the standard design where only a couple of cogs are interacting with the filament at a single point in time – as illustrated in the screenshot below. 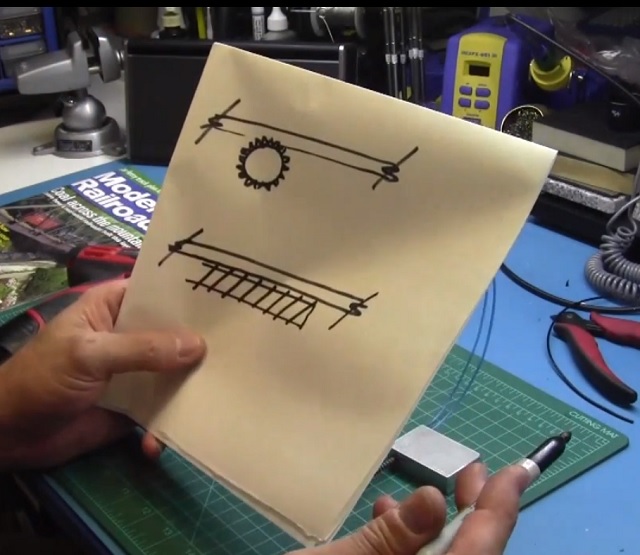 Therefore the worm wheel creates more force and thus also doesn’t need to bite into the filament as hard – even though in Werner’s first proof of concept – demonstrated in the video below – the bite is actually quite hard, but it does prove his point of the potential of such a set-up.

The idea of using the worm gear set-up is not completely new in the world of filament driving, however,  as some commenting on Werner’s video  – and presumably some of you will as well – point out. One earlier example of a machine enabling the use of a worm gear was the Rapman BfBs where the screw, though an an angle, was also used. Despite previous examples in the history of RepRaps, a fully functional 3D printer with such a system – a precise, durable and easily swappable filament driving worm gear – is yet to be publicly seen. Also, fingers crossed for the absence of unnecessary patent disputes around this area, if a machine using this particular set-up ever does come out.

If you want to take a look at what else Werner has been up to with his BerryBot, head over to his YT channel.