Some of the 3D printing system vendors are breaking with tradition this year ahead of the prodigious Euromold event by unveiling their new machines ahead of the German trade show opening its doors later this. One of these is voxeljet, which has announced the VXC800 3D printer. This industrial grade system is the world’s first continuous 3D printer according to voxeljet and will be on show in Frankfurt. The VXC800 is series machine based on the innovative VXConcept study that was so well received last year that it lead to rapid implementation. 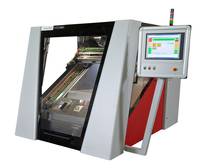 Dr. Ingo Ederer, CEO of voxeljet technology, commented, “The VXC800 establishes a completely new generation of machine that allows the building and unpacking process steps to run at the same time, without having to interrupt the operations of the system.”

This technology development is the result of a novel patented design comprising a horizontal belt conveyor that controls the additive layer building process. The layers are built at the entrance of the belt conveyor, while the unpacking takes place at the exit. The finished component can simply be removed from the rear end of the system when completed. According to voxeljet, this means that the length of parts is virtually unlimited with this type of system, as there are no restrictions with respect to the length of the belt conveyor, while the width and height of the build space are 850 x 500 mm respectively. The VXC800 utilises a 600 dpi high-definition print head and can offer layer thicknesses ranging from 150 µm to 400 µm.

Dr. Ederer concluded, “The development of the world’s first 3D continuous printer is a milestone not just for voxeljet but for the entire industry. Orders for the machine can be placed as of the start of the EuroMold. First deliveries are planned for the second quarter of 2013.”