When they aren’t busy causing controversy with their false emissions report, the Germany-based Volkswagen Group find time to take part in some pretty neat 3D printing projects. The car company has been a long-standing supporter of implementing 3D printing technology in the automotive industry, having featured the Polish-based 3D printing company 3DGence in an advertisement earlier this year. In fact, the VW Group holds a total of 14 toolmaking units in nine countries, and have placed a strong focus on utilizing metallic and sand-based 3D printing methods. 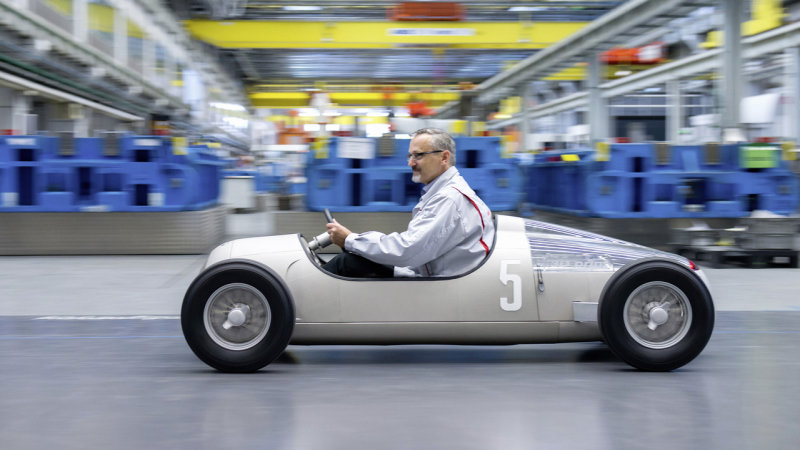 In their latest automotive innovation, Audi Toolmaking, which is owned by the VW Group, has created a 1:2 scale replica of a 1936 Auto Union Type C Car, a classic Silver Arrow model grand prix racer manufactured in the pre-war era. The replica was manufactured with metal-based 3D printing, using selective laser  sintering technology to mold the metallic powder into a sleekly designed Silver Arrow Grand Prix racer.

“We are pushing forward with new manufacturing technologies at Audi Toolmaking and at the Volkswagen Group,” said Doctor Hubert Waltl, Audi’s Board of Management Member for Production and Head of Toolmaking at the Volkswagen Group. “Together with partners in the area of research, we are constantly exploring the boundaries of new processes. One of our goals is to apply metal printers in series production.”

Audi Toolmaking was able to 3D print the Auto Union Type C racer in parts measuring up to 240 millimeters in length and 200 millimeters in height, while the grain size of the metallic powder was a mere 15 to 40 thousandths of a millimeter, allowing for complex and finely detailed metal prints. This high-quality capability allowed the VW Group and Audio Toolmaking to replicate the model to a T; it both looks and functions in precisely the same fashion as its 1936 predecessor.

It seems that with the 1936 Auto Union Type C Car project, VW Group and Audi Toolmaking are placing a heavy investment in advanced 3D printing methods as a means for production. The Grand Prix racer looks fast and fun, and shows promise for the VW Group and their new developments. Let’s all hope that, if their metal 3D printed car drives around our neighborhoods, it will actually meet emissions standards this time around…