Investors who had not joined the 3D printing frenzy with small cap 3D printer stocks such as ARCAM AB ORD (OTCMKTS:AMAVF) or ExOne Co (NASDAQ: XONE), or mid caps 3D Systems Corporation (NYSE: DDD) and Stratasys, Ltd (NASDAQ: SSYS) will have their eyes peeled on this stock’s progress: At the end of last week, Germany based small cap 3D printer stock voxeljet AG (NYSE: VJET) made a spectacular debut on the NYSE – in the first days trading the stock opened at $20 and closed at $28.83, a nearly 122% gain from its original $13 pricing.

Voxeljet saw excellent gains on it’s opening day, and the trend has continued since. This German company provides high-speed, large-format 3D printers and on-demand parts production services to industrial and commercial customers. voxeljet’s machines can build models out of several different kinds of sands and plastics. ExOne is its main competitor in the sand space; both companies manufacture printers that industrial customers use to produce sand moulds for casting metal components. 3D Systems and Stratasys are its main publicly traded competitors in the plastics space. Beware valuation volatility amidst the overall sector trend for hype and overinflated expectations regarding the short-term sales prospects for industrial additive manufacturing.

Last Friday, voxeljet AG priced 6.5 million American depositary receipts at $13 each with shares rising 122% to $15.80 to close at $28.80 Friday and traded as high as $29.06. The company raised $84.5 million in its initial public offering (IPO) and expects to use the money raised to expand its service centre in Europe, and open in North America and Asia; boost its R&D; push marketing efforts; and set some of the cash aside for acquisitions.

However, the company noted a number of risk factors in its IPO risk filing here:

‘A significant portion of 3D printer orders are typically received during the second and fourth quarters of the fiscal year as a result of the timing of capital expenditures of our customers. Our 3D printers typically are shipped the next quarter after an order is received. Thus, revenues and operating results for any future period are not predictable with any significant degree of certainty. We also typically experience weaker demand for our 3D printers in the first and third quarters.’

Valuations of 3D Systems Corporation and Stratasys might make new investors take a pause. If you’re interested in investing in noxeljet, now may not be the ideal time. Or, you may wish to consider waiting until the initial IPO appeal dies down. 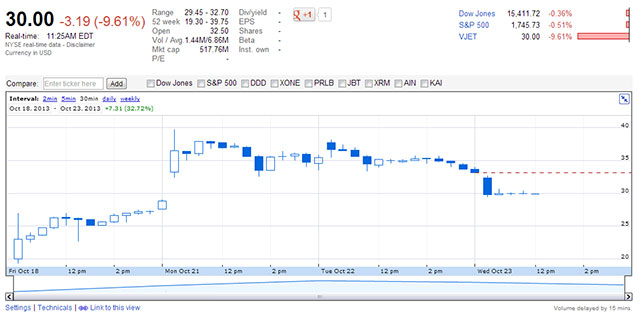 Its price-to-sales ratio is about three times that of the two larger 3D printing companies, both of whom experienced a relative depreciation of value this year. However, the company does have some potentially big competitive advantages related to machine speed, size and configuration. It’s too early to project future prospects regarding this strong valuation: but the future currently looks healthy for voxeljet.