After working with the firm for some time, manufacturer of industrial 3D printers voxeljet has acquired Propshop, a UK-based producer of props for the film and entertainment industry. You may have caught our recent story on Propshop’s gold-plated, 3D printed Aston Martin, originally used in the filming of Skyfall, or you may have seen the firm’s work in such films as Zero Dark Thirty, The Dark Knight Rises, or Thor, for which the Propshop 3D printed Thor’s hammer using voxeljet’s 3D printers.  Due to the immense size of some of voxeljet’s systems, the company is capable of 3D printing enormous objects, like the badge below. 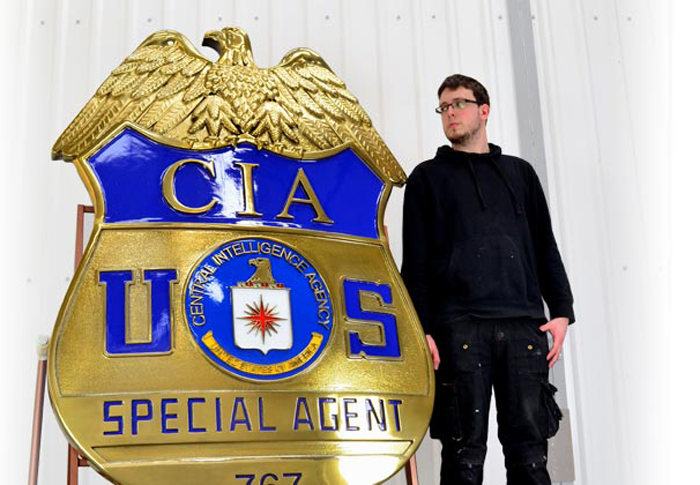 Propshop will continue its work in the entertainment industry but, as a subsidiary with the name voxeljet UK, the firm will fabricate goods on-demand as part of its parent company’s Services segment.  The founder and CEO of Propshop, James Enright, will, in turn, become the Managing Director of voxeljet UK and Vice President for Consumer Markets.  The new VP said of the news, “I am excited to be working with voxeljet and about the opportunities presented by industrial 3D printing techniques and capabilities in developing consumer products. Propshop has a vast archive of digital content, which can now be transformed into collectables and art objects, effectively supplying the expanding market for this type of product.”

CEO of voxeljet, Dr. Ingo Ederer, added, “We have a longstanding relationship with Propshop and are impressed with the business James and his team have developed over the years. Propshop’s innovation, creativity, and advanced experience with our 3D printing technology has made it a leading provider of sophisticated and complex content to the entertainment industry. These attributes and award-winning capabilities have presented Propshop with several new and very exciting consumer-related opportunities in the on-demand parts services market uniquely suited for large scale 3D printing production. Combining the expertise of both companies in this regard is an attractive arrangement. We are very happy to welcome Propshop into the voxeljet family.”

Stay tuned for voxeljet UK’s work in the consumer service market and look out for their work in the upcoming Warcraft film.