Creating models and prototypes with 3D printers has been at the core of this technology area since its inception. With the advent of more sophisticated hardware, software and available materials, more companies are now seeing the benefits of including 3D printing within their product development processes. The U.S. Army Corps of Engineers in Sacramento District have embedded 3D printers firmly in their design process when planning their most complicated projects.

For the past four years the Sacramento District has used 3D printers for creating scale models of their largest construction projects, most notably the Folsom Dam auxiliary spillway and upgrades to Isabella Lake Dam. With the use of CAD software and 3D printers the project team have created scale models of the full project components to better visualise and communicate the undertaking. 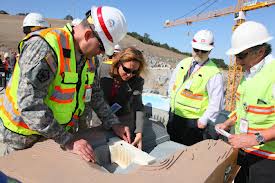 In the past all of these models would have been hand crafted, which is time consuming and more costly than printing them with ABS plastic as they currently do – literally in a matter of a few hours. Given the accuracy and the durability of these 3D printed parts, the team can now easily explain complicated Corps construction projects.

A good example of such an undertaking is the creation of a new spillway at Folsom Dam to reduce of the risk of flooding in the Sacramento region. The team has created a scale model of the 367 foot wide and 146 foot high control structure, with an estimated project cost of $750 million. With the scale model the project team can easily show intricate details and a visual overview of the key elements to government leaders and other key stakeholders.

Dave Neff, who is the technical lead explains: “When compared to a 2-D drawing or rendering that only shows the outer surface of the project, a 3-D model provides a much better way to help explain what the project is and how all of its pieces will function to a non-technical audience.”

The visualization of the projects has become invaluable to the Corps planning team and it is now firmly in house and a key part for all forthcoming projects they construct.

As the lead hydraulic engineer for the Isabella Dam Prjoect Nathan Cox concludes: “It’s said a picture is worth a thousand words, well a 3D model is worth 10 times that.”

Source: US Army Corps of Engineers