Working at a lenticular promotional company, where we made 3D images for advertising purposes, I’d occasionally get a call from someone who wanted to 3D print some prototype for their potential business or a gadget for personal use. Most of the calls were local to the LA area, so I’d direct them to Deezmaker, the only 3D printer retailer nearby, where they do on-demand printing at reasonable prices.  So, when, I heard about UPS’s announcement that they’d feature and offer in-house 3D printing for small business owners, I was a little bummed. 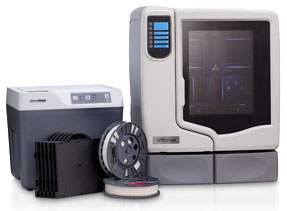 See, last Wednesday, the UPS Store released a statement saying that they’d start offering 3D printing services in their stores, beginning with select locations in San Diego, California.  The machine they will initially rely on is a Stratasys uPrint SE Plus, which uses fused filament deposition of up to 9 different colored filaments and water-soluble support material to create pretty high resolution plastic prints. Because the UPS Store is already a location some business owners might go to to handle services like packaging and shipping, it makes sense that they might also head there for other business needs.  And UPS had also conducted a survey of small-business owners that expressed a great deal of interest in using 3D printing services for “prototypes, artistic renderings or promotional materials,” according to the press release.

Michelle Van Slyke, the VP of marketing and small business solutions at The UPS Store, pointed out the advantage that 3D printing might offer customers, saying, “Start-ups, entrepreneurs and small business owners may not have the capital to purchase a 3D printer on their own, but they may have a need to show prototypes to their current and potential customers. By offering 3D printing capabilities in-center, we’re able to help further our small business customers’ opportunities for success.”

And all of this is true. It will certainly serve small business owners and startups to have a local place to get 3D-printed prototypes and the like.  But, at the same time as it serves some small business owners, it will inhibit others, like Deezmaker. Because names like The UPS Store and Staples, which also announced that it will host 3D printing services, appear so readily in the mind’s eye of consumers, anyone in need of a 3D print will instinctually head there instead of the newly minted 3D printer retailers struggling to make a name and presence for themselves.

In the past, it would have been easy to say that that’s the way the cookie crumbles, but I don’t want cookies to crumble that way anymore. What I’m hoping is that people remember what it’s like to go to Staples or the UPS Store to get anything done. Rather than people truly passionate about 3D printing who do it because they love it, customers will be faced with employees making just above minimum wage (currently far below that of a living wage in the United States) that aren’t particularly thrilled with their job. Of course, small hackspaces might not have the high tech equipment, likely using RepRaps instead of uPrints; however, the prints at UPS, though high in resolution and diverse in color, might not be produced with care.  And, so, customers will realize that they’d rather visit their local 3D printer retailer or hackspace to get a print done. This is what I’m hoping anyway.  But, you can watch the UPS Store promotional video below and remember that it’s a promotional video and that reality might not be as polished as the ad.