Shane introduced 3DPI readers to the da Vinci 1.0 3D printer from XYZPrinting at the end of last year. He found plenty to be positive about then, most notably the price of USD499. Oliver Fueckert was originally a native of Germany, now living in Taiwan, and he is one of the first people to be in receipt of his da Vinci 3D printer. In another first, his inaugural post for 3DPI, he takes us through the set-up process with his new 3D printer …..

February 3rd 2014 and the deliveryman rings the doorbell. He brings in the brand new Da Vinci 1.0 3D printer that I had just ordered the previous day. You have got to love Taiwanese online shopping services — and the fact that the manufacturer, XYZPrinting, is also based in Taiwan. I am probably one of the first people to receive one of these printers. XYZPrinting’s stated goal is to sell 100,000 units. Let’s see. It is certainly a very ambitious goal!

When I ordered it, I was kind of interested to see what one can expect from a USD 499 printer.

Read on to find out. 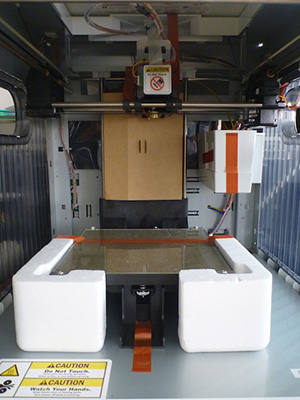 The shipping box is certainly solid. After cutting the straps that hold the large box together, one can easily lift off the top box to reveal the printer. The packaging is certainly appropriate and everything looked to be in place following transportion. After removing more cardboard and a couple of styrofoam corners, I carefully lifted the 3D printer onto my table to peel off the final plastic sheets, which protected the outer transparent plastic panels from scratching. 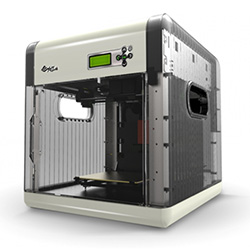 Overall, I thought the transport packaging had been excellently thought through and I could not detect any issues from shipping. [As an aside, I had a much worse unboxing experience with my Ultimaker that was shipped assembled. It had lots of bits and pieces that came loose during transport, which were subsequently distributed across the bottom of the carton. It took the excellent support guys in Holland to ship me some spare parts to get started.] Suffice to say, a good packaging/shipping strategy definitely pays off for the customer, and, ultimately the manufacturer when they don’t get inundated with immediate after-sales calls/messages. 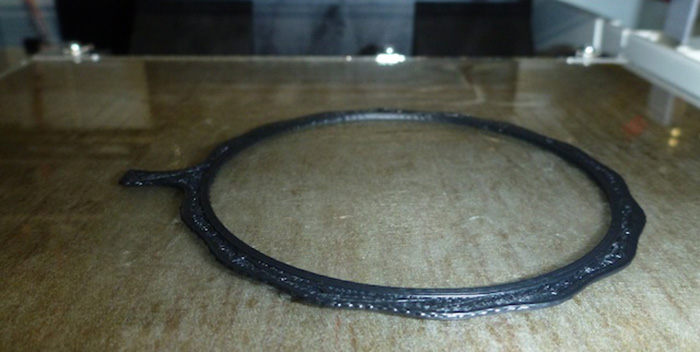 After opening the plastic door, which together with two small plastic inserts that plug the carry cut-outs on the side thermally sealed unit, the inside looks clean and open on first glance. There are quite a few more transport protection tapes to be removed. It is advisable to read the included quick start guide so you do not forget one before you power up.

A few, not quite so nicely routed cables lead to the heated-bed’s smart leveling sensors. But the majority of cables were tucked away cleanly and attached to the printer chassis. Otherwise no major surprises. The inside looks like many 3D printers I have seen before, but I did note some special features:

• On the right hand side a cleaning tower is installed, that allows the print head to drive over and scrape off surplus filament that might have oozed.

• Underneath is a generously sized container to catch the falling filament pieces. Nice idea! I had improvised one on my other 3D printer, but this is a great plus that I have not even seen on printers four times the price.

• The print head has a small metal rod with which the printer makes contact on the three metal corners of the print bed in an auto calibration process to sense the platform level.

The printer came with a CD-ROM, which holds its operating software and manuals.

To my disappointment I could not find any MAC compatible software on the disk. The specs clearly stated MAC compatibility. I only found a Windows version in English, Chinese and Japanese languages. I had some problems installing the English version with the Autorun program that popped up when I inserted the disk into my VMWARE Windows 8 installation, as some setup files were missing.

However after opening the setup.exe straight from the software directory it worked just fine.

The software is rather rudimentary, but I guess the target group will appreciate a simple and clean interface. I imported a little STL file and then exported it into the Da Vinci 1.0 native control format. Da Vinci Control files have a .3w file Extension. On first look, when opened with a text editor, they seem like garbage text files like this:

But do not despair, after prodding it a bit with some encoder tools they reveal their true content, which looks very familiar again:

Basically, it is standard GCODE, as output by all major Slicer Software. I created a small tool here for other users to be able to quickly decode and re-encode these files easily. Hope you like it.

After treating the config files in the setup folder the same way, it seems to me that XYZPrinting uses the Open Source Software “Slic3r” under the hood. Time will tell, but if they do, they will have to open their source code as well, as Slic3r is released under GNU Affero General Public License. Hence the source code of the precompiled binary should be released.

Anyway, on to printing the first part! 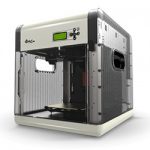 The filament included came in a sort of canister/cartridge.

At the bottom of the cartridge you will find a little connection to the embedded flash ROM that stores some information about the filament. I guess it’s also designed to stop you from using different filament than the original one. But with only 300g on the included spool, I opted to just use our Excelfil Black ABS 1.75mm instead of the included white material.

Feeding the filament is not a big deal and is pretty easy using the function on the display panel. The printer starts heating the print head and then starts the extruder motor. Just inserting the filament into the head “sucks” it in and a small amount of extruded ABS pops out of the nozzle. 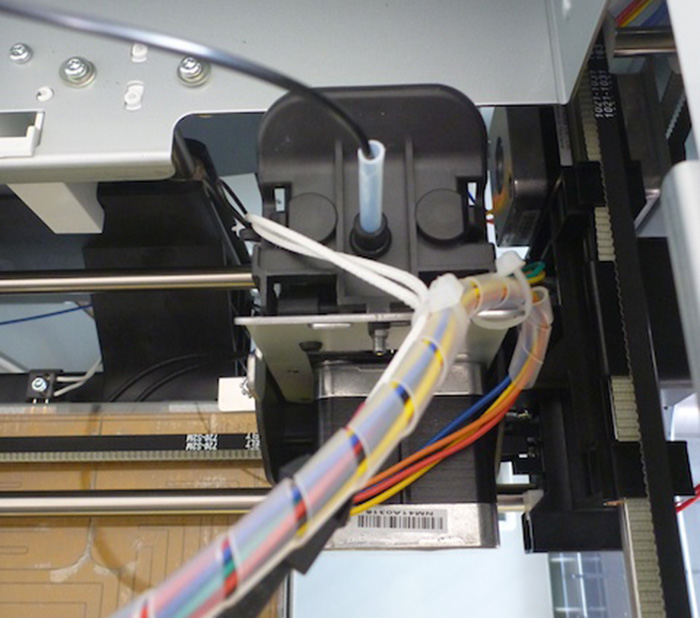 Below you can see the extruder dumping the excess filament into the storage box. The shiny metal thing right under the head is the cleaning tower mentioned earlier. 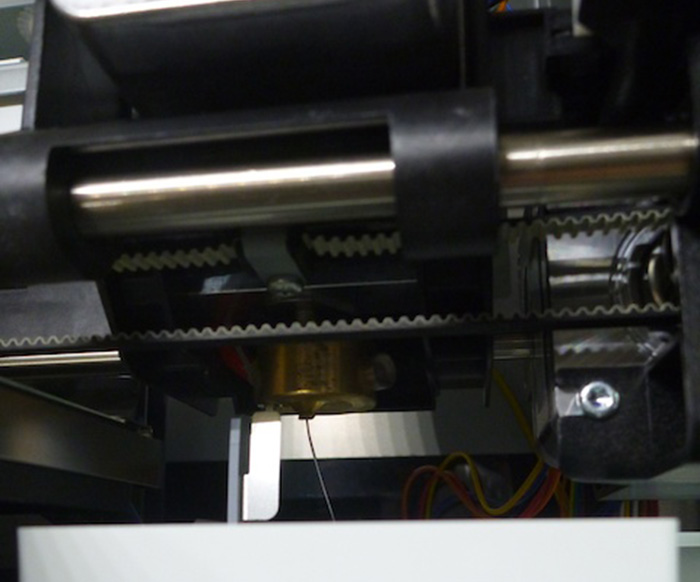 And then finally starting a first print. There are three sample files stored in the controller itself.

I hit print on the first one to see what happened. The first thing was that the printer heated to 205˚C for the print head and 90˚C for the heated print bed.

That took a while — in reality probably about 5 minutes, but that is much longer than I am used to with my Ultimaker. A stronger power supply was probably not an option at the Da Vinci 1.0’s price point. This is probably something I will look into attaching myself.

Once heated, the printer performs an “auto calibration” process. I did not quite understand why it needs that, as I had a hard time getting it going and then, only after I had levelled the bed manually to an accuracy of 0.1mm did it actually pass this calibration test. Before manual levelling I kept getting a “Calibration Error.” It would have been nice if bed leveling was automatic, but not yet it seems. Maybe this is something that will come in later firmware.

And then after that three-minute auto calibration the printer finally came to life and started printing. The speed was not the fastest I have seen, but respectable.  It did make quite a lot of ‘squeaky’ and ‘humming’ noise. I will need to investigate further and see how to dampen that. It’s the metal panels that vibrate with the print head frequency I believe.

Anyway. That was that and I stopped that test print after a little while as I explored the software more.

But be in no doubt – there will be much more to come….

Oliver is the managing director of Voltivo Group Ltd. in Taiwan leading a small group of enthusiastic individuals that are having fun developing best-in-breed consumer products for a global market. What initially started as a hobby, developed in to a new business line of 3D manufacturing consumables and accessories for the 3D printing enthusiast community. Oliver, originally from Germany, has been living in the Asia Pacific Region for the last 15 years. Before founding Voltivo in 2011, he worked for Cisco Systems and Ericsson.