0 0 0 0
While many software companies are working on making it easier for you to do everything you need before you 3D print new creations, increasingly we are seeing initiatives that focus on what happens after a print is made. These including finishing machines and materials, as well as the testing of 3D printed results. The Testrbot falls into this last category as a 3D printed Universal Test Machine (UTM) that test the mechanical properties of a 3D printed object.
Developed by Michael Graham, a mechanical engineer who posted the project on Instructables and on his own Engineerdog.com blog, the UTM can be used to perform any type of static or dynamic testing in tension or compression of up to 200 lbs. In general these are machines found in the high end laboratories of any company working on development of plastic materials and plastic-based products. They stretch, bend, compress, or pull plastic samples at a controlled speed in order to assess material suitability for a given process, as well as the consistency between lots. 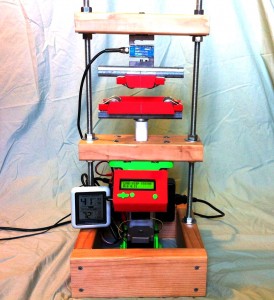 The main difference between Graham’s UTM and standard industry testers is that professional UTMs cost well into the thousands of dollars. Graham’s Instructables system, on the other hand, can be assembled for a total expense of $300, which is very convenient, considering that many of the parts are 3D printed and that the load cell alone costs about $150. TestrBot only directly measures force and displacement. In general UTMs apply force to a specimen in order to induce strain in the plastic. A given test— tensile, flexural, compression, or shear —is classified in terms of the direction in which strain is induced in a specimen and the speed at which the force is applied.
Graham used his system to test the “exotic” properties of ABS and PLA, meaning that, while the basic characteristics of these materials are well known, their chemical compositions are not always uniform and they often display properties that vary from brand to brand and from print to print. These can be measured with extreme accuracy: “The displacement measurement resolution is insane. TestrBot can measure distance increments of .00014” or about 1/28th the thickness of a sheet of paper,” Graham said adding that “the force readings are a bit more limited due to the 10bit Arduino; the smallest force it can measure is .195 lbs. Still though, that was small enough to produce [a] sexy smooth graph…”
“The really interesting stuff is yet to come,” Graham said. “When I print out a lot more specimens that are slightly different from the first so I can isolate the effect of individual variables. At that point having a graph will make the effects of minor design changes very clear.” Furthermore, all of the Testrbot’s readings are repeatable and consistent with the weights in Graham’s gym. If you think you have what it takes to build one, you can find the STL files in Autodesk’s 123DApp database, and get a full 3D view of what the final product will look like. The are no detailed instructions on assembly but, then again, if you need an UTM and have read up to this point, you probably already know what to do.