As 3D printing technologies open up to more people than ever before, the entire industry looks to artists to try to visualize its possible future applications and the way they can modify the creative process. In fact the concept of “materialization”, that is the translation process from idea to virtual to physical, is so omnipresent that two independent exhibits, both named “Materialize” opened up this past weekend — one in Arizona and one in Ohio.

As Mike reported last October 23rd, the Arizona show is scheduled to run until November 27th and, curiously enough, one Ohio-based artist, Nathaniel Hartman, saw his work accepted at both exhibits and decided to go with the home show, which is taking place from October 26th through until December 7th.

Wright State University’s Robert and Elaine State Galleries hosts the exhibit that sees a total of 27 artists display works where they explore the processes of material translation, that is the – often overlooked – tedious work that goes into “materializing” a virtual concept.

This exhibit is focusing on how the digital revolution is changing art and the creative process in general. It will feature a total of 58 works, which include many 3D printed pieces as well as creations achieved through 3D scanning and subtractive CNC milling processes. Just some of the pieces presented are Erosion, 3D printed in gypsum with full colour binder, and Lea-Watertline Roughing”, a 3D scan digitally milled in urethane foam. 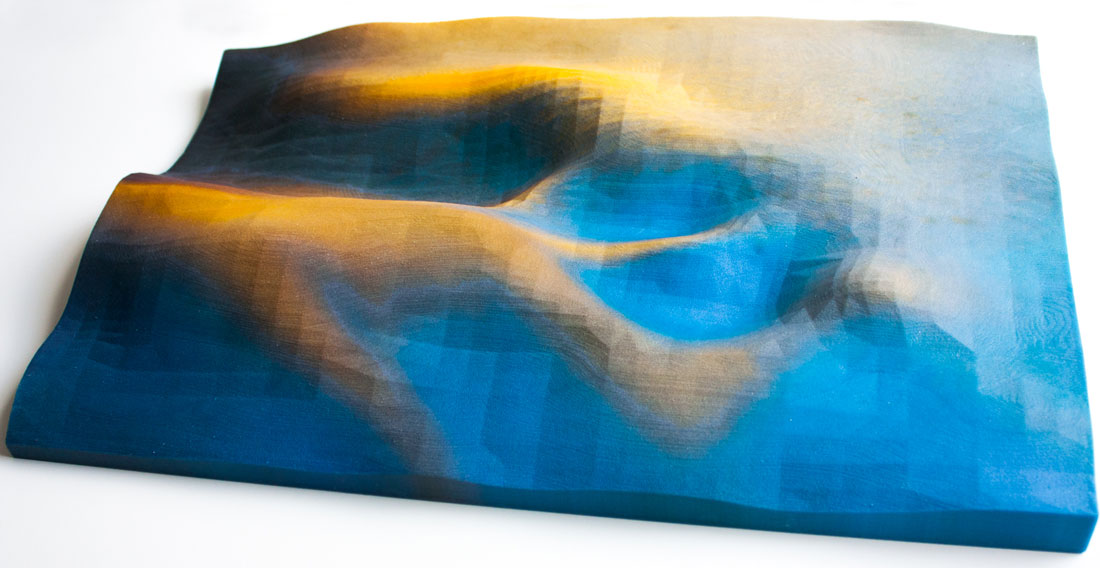 On the opening day, featured artist and exhibition juror Tom Lauerman gave a talk  where he explained his approach to 3D printing and digital creativity in general, describing how in his own experience he was amazed by the way digital manufacturing technologies made it possible for two previously completely separate processes – digital CAD design and manual manufacturing – to combine into a new form of creative expression, a process that can also be viewed as an artistic approach to STEM (Science, Technology, Engineering and Math) subjects.

“One great benefit of taking on a project like ‘Materialize’ for me has been this process of getting to know the work of the artists represented here,” said Lauerman, who has been an adopter of 3D printing technologies since 2008 and has received the Horizon Award from the American Craft Museum (now known as the Museum of Arts and Design) in New York and an Individual Artist Grant from the Illinois Arts Council.

“None amongst us has used these technologies for a particularly long time. We aren’t rebelling against a previous generation of digital fabrication artists whose work we feel constricted by. These are first-generation digital fabrications. It is a path laid one step at a time in every possible direction simultaneously,” said Lauerman whose quite inspiring talk can be found here in its entirety. In fact it could very well be used to introduce the Arizona Materialize exhibit as well.