The Revelations of 3D-Printed Robats

When I was at the Los Angeles Zoo the other day, my friend Jon kept saying how he wished humans had never done away with the opposable toe that the great apes have – the one that gives all other primates that cute set of hand-feet.  I said, “Jon, as soon as I get my Bukobot built, we’re going to use that Coming Up Short Handed prosthetic finger project to print you an opposable thumb and make you some hand-feet.” It’s not the most charitable reason for prosthetic fingers, but it will serve a higher purpose some day.  It turns out that Brown researchers are going down the same path as Jon and I as they have developed some 3D-printed bat wings.  While they probably won’t use it for human modification, I don’t see how it’s out of the question.

What professors Kenneth Breuer, an engineer, and Sharon Swartz, a biologist, were aiming for was an understanding of how the flight of bats works, exactly, and, because it would be impossible to have a bat fly around attached to measurement gear and at the whim of some human scientists (as opposed to bat scientists), they constructed a robotic bat wing. The wing, constructed from 3D-printed parts, silicone elastomer, servo motors and cables has allowed Breuer and Swartz to simulate the physics behind bat flight. And they can manipulate the wing, have it beat faster or slower and alter other variables, saying, “We can answer questions like, ‘Does increasing wing beat frequency improve lift and what’s the energetic cost of doing that?’ We can directly measure the relationship between these kinematic parameters, aerodynamic forces and energetics.”

The wing replica, while it does not have the complexity of an authentic bat’s appendage, will provide valuable data relating to bat physiology, as well as physics itself, with the replica allowing researchers to manipulate and understand five key elements to winged flight, according to Brown University’s coverage of the story: “flapping frequency, flapping amplitude, the angle of the flap relative to the ground, the amount of time used for the downstroke, and the extent to which the wings can fold back.” 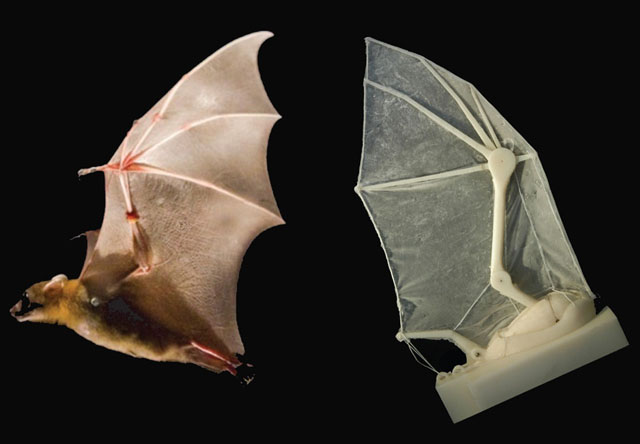 The Brown University reporting also suggests that such research could lead to the creation of “small flapping aircraft [as] the research was funded by the U.S. Air Force Office of Scientific Research and the National Science Foundation.”  And, after watching an Air Force video on the future of small, insect and bird-like swarms of mini-drones, I think that Jon and I have to get to work outfitting him in all of the latest 3D-printed animal appendages so that as mythical sci-fi creatures, we can outrun the potential bat-drones of the future.  If they get that cloaking tech off the ground, though, it may already be too late.