From the massive mind of Brook Drum comes yet another exercise in minimalism. A mind boggling $299 is all you need to get your hands on Printrbot’s newest and sveltest 3D printer, the Printrbot Simple. 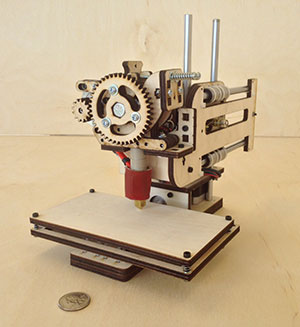 This tiny kit has outer dimensions of only 7 x 8 x 9 inches when built, weighing in at a grand total of 5lb 2oz (2.3 kilos) and is made from Printrbot’s favoured laser cut birch.

With the Printrbot Simple’s 100mm cube of print volume you won’t be building giant fighting Gundams but with the 0.1mm resolution as standard it is an excellent way to enter the world of 3D printing without breaking the bank or extending your house!

The machine itself is still in the beta phase, and was launched on Thursday, and what is more, it has already sold out of its initial run of 99 units at an introductory price of $249  — in fact more than 75 were sold in the first 14 hours!

It appears that the Printrbot Simple’s cute looks, capable mechanics and perfect pricing are already a hit, lowering the barrier of entry to 3D printing once again.

A second run of Printrbot Simple 3D printers will be available again imminently — from 20th May.