One of the things that I love most about my job reporting on the many facets of the 3D printing sector is the capacity it has for taking me off on unexpected, and quite frankly, totally amazing tangents. This story has done just that.

Since meeting designer Tobias Klein at the 3D Print Show in London last year I have kept in touch with him and kept abreast of his fascinating work, the most recent of which is being exhibited at the Industry Gallery in Washington, USA. Indeed The Invisible Human exhibition brings together contemporary medical technology with the scientific art form of crystal growing to produce a fascinating installation that will be open to the public for 40 days and 40 nights throughout February and March.

The exhibition pieces comprise nine large scale crystal grown canvases describing the first interactively grown crystallization process based on human MRI scans as well as four 3D printed live grown crystallized light objects. Many of the 3D sculptures are at 1:1 scale of the human parts they represent and are described as ‘printed amalgamations of crystal and laser sintered nylon.’ 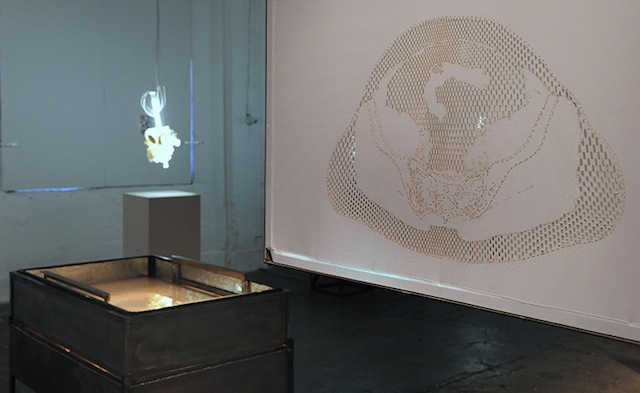 The Invisible Human exhibit has the most intriguing background, which began, rather precisely, at 12:31 am on August 5, 1993, when Joseph Paul Jernigan was executed by lethal injection. Jernigan had been sentenced to death following his stabbing and shooting of 75-year-old Edward Hale, who discovered the then 27-year-old Texan stealing a microwave oven. Jernigan spent 12 years in prison before his final plea for clemency was denied. He then agreed to donate his body for scientific research. Anatomists froze his cadaver solid at -73°C, then cryosectioned it at 1 millimeter intervals into 1,871 slices, which were then photographed. The scientists named the experiment the ‘Visible Human Project’. Living cells consist of an aqueous solution inside of a cell membrane. The soft tissues of many living systems are essentially structured water. 50-75% of the human body is water. This high proportion of water makes crystallisation within the body occur in two main ways: through dehydration, when minerals crystallise from a saturated solution, and by freezing, when ice crystals are formed. The formation of crystals in living cells is usually fatal.

For the ‘Invisible Human’ exhibition, Tobias presents an installation that echoes the 1,871 slices of Joseph Paul Jernigan — digitally dividing a human body using MRI scanning, and turned it into a template onto which crystals are grown. The body sections are given shape through the crystallization processes that echo those occuring in the body as it dies. Each slice is a combination of a unique human being, a unique crystallization process, and a unique installation context. The live audience visiting the gallery is invited to influence the growth of the crystals through manipulating the temperature within the exhibition cases and interaction can also take place via the exhibition’s website. As one phase turns into the next, the space continuously changes, oscillating between life and death.

The space is a production environment, a laboratory for the creation of the invisible human and a studio to witness and experience the continuous reactive growth of the crystals to form a chemical symbiosis with the magnetic fields of the MRI and the electromagnetic information space surrounding us. The installation is time-based and continuous, limited to 40 days, in various time-scaled intervals.

For anyone that can’t get to Washington – take some time to view the image gallery below to experience these wholly original exhibits yourself.

Tobias Klein is the principal of Studio Tobias Klein, a practice operating in the between of architecture, across the fields of art and installation, experimental design, interactivity and urbanism. Trained internationally as an architect, his work maintains a fascination with the construct of space, while questioning its modern interpretation. Through the works at varies scales and cutting edge 3D printing materiality, the studio achieves a re-positioning of this understanding in the context of embodiment, perception and projection. The works constantly evolve between static and dynamic models, shifting from objects to installations and design, prospecting new visual territories in the field of narrated embodied space.