Mingjing Lin is a fashion designer currently studying for her PhD at Royal College of Art, London. Her current project is an ongoing exploration of 3D printings use in fashion and textile design. In her recent collaboration with Prof. Yingjun Li, the team developed a modern interpretation of a traditional Chinese dress, the Qipao. The collaboration, called Interfashionailty, mixed both traditional dress making techniques with additive manufacturing.

Mingjing welcomed 3DPI to her studio on the third floor of RCA’s Darwin Building. The corner of the studio where she works is an inspiring setting; covered in wall sized windows, Hyde Park fills the background on one of the sides. Meanwhile Royal Albert Hall towers right in front of her working desk.

During our conversation we learned about Mingjing’s past, inspirations for this project and creative process. 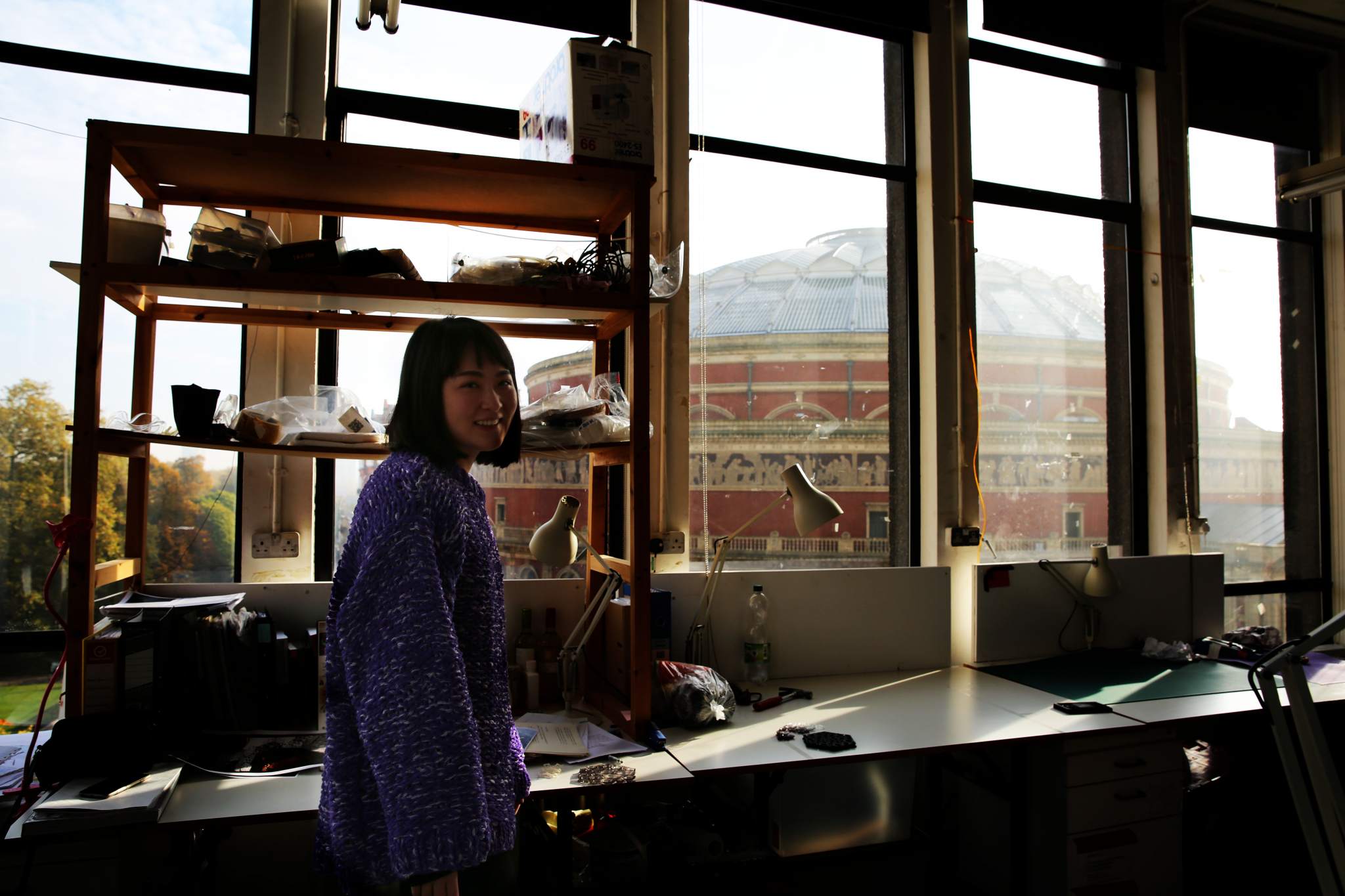 Tell us about your background, how did you get involved in the world of fashion and technology?

I came to London, after being a student at Tsinghua University in China. There I studied fashion design, although the institution is famous mostly for its science and technology research. The design department used to be an independent institution called the Central Academy of Arts & Design before merging into Tsinghua.

When I was studying there most of the people I was surrounded by were engineering and science students. Coming from the design and art department, at first we didn’t really understand what they were doing or why was it interesting. Even I was against technology for a while, being more interested in things that were handmade. I just like the tangible feeling of the material, the fabrics.

After finishing my degree, I applied to a masters program in London College of Fashion. While studying there the focus was more business oriented, which I enjoyed greatly. The whole program was focused around the fashion industry. At the time, I missed the feeling of handmade creation though. 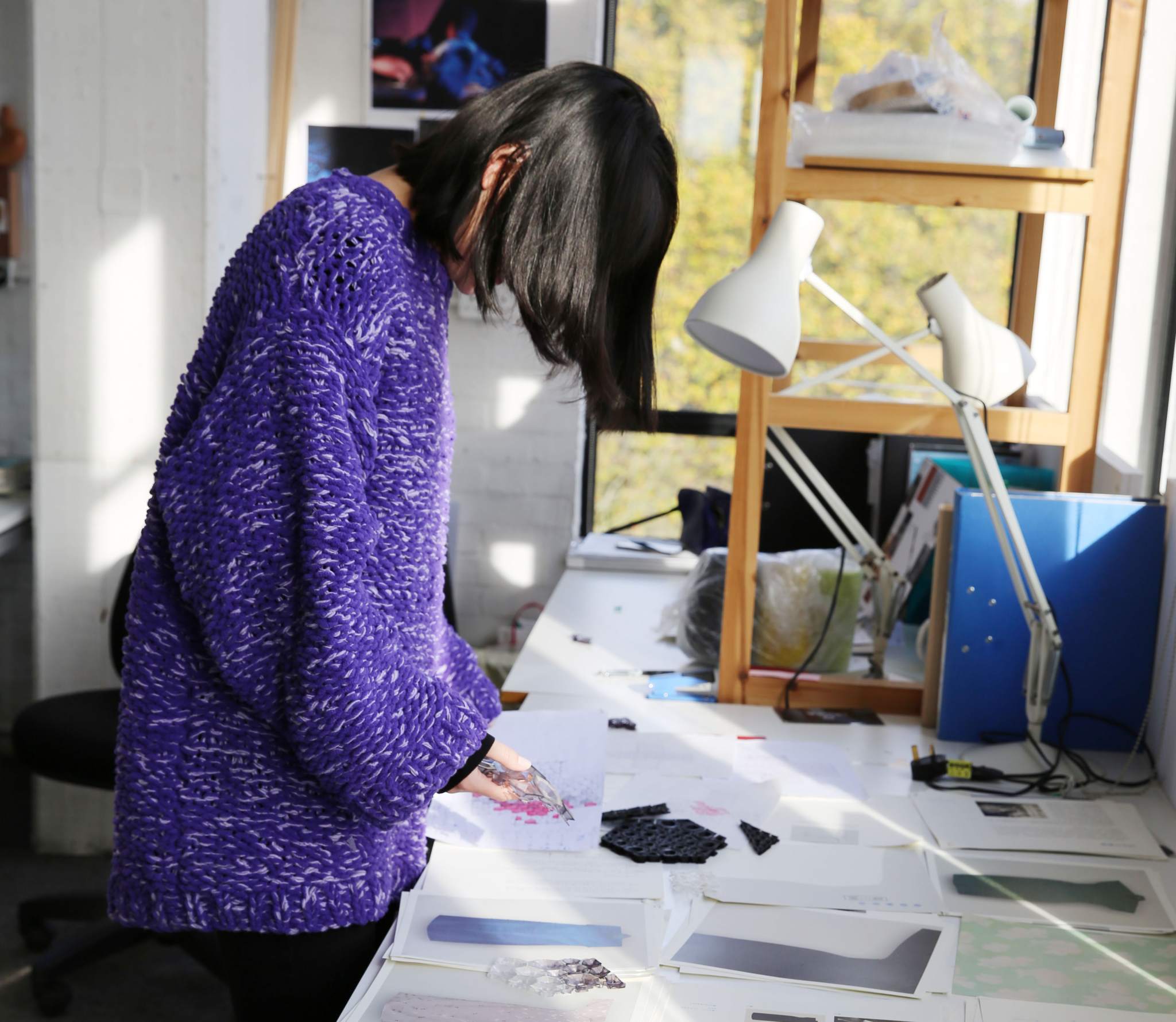 It was by that time that I started getting involved with 3D printing; it was already beginning to be used by fashion designers, such as Iris Von Herpen. She was one of the first ones to become involved, and started using this technology in her work as early as 2009 or 2010. By the time I was doing my masters in London it was 2012, so lots of people were already using 3D printing in this industry, specially in haute couture [high end runway fashion] experiments. Around that time I began getting involved by doing some experiments of my own.

What was your perspective on the use of 3D printing at the time?

For me 3D printing is the bridge that connects digitization with tangible creation; bringing the virtual world into reality. You can design anything you want allowing your imagination to grow. With 3D printing you can do things you couldn’t even think possible before. That was truly inspiring for me.

But somehow, I still wanted to keep the old ways. I wanted to embrace the contradiction between tradition and technology. And at the time I truly admired Iris Von Herpen work because she came from a haute couture background, while embracing this new technologies.

What was your first experiment like? What was the result of it?

It seemed as we were trying to replace traditional processes and ways of doing clothes, and I disagreed with this view. You can see the garments we are wearing today in everyday life; new materials are really not replacing cotton, even when they are other artificial options. It’s should be the same with 3D printing in fashion.

My early experiments made me question how to add 3D printing onto time tested clothes making, instead of trying to replace it all just because we have new technology. I just didn’t agree with the concept that 3D printing would replace traditional manufacturing of fashion, which at the time was a prevalent thought among those experimenting with this new technology.

For me, additive printing is a metaphor itself; we are adding on top of layers of complexity to what’s there already. The focus is not about replacing what works well but rather adding new options to fabricate garments, bridging a gap between tradition and technology.

So this lead you in the path to create traditional garments? Please tell us more about your recent collaboration.

Prof. Yingjun Li, who I am collaborating with for this pieces, used to be my teacher when I studied in China. He tends to be more traditional when it comes to fashion. He did a lot of studies on traditional Chinese garments, specifically how they were made through old fashioned methods around the Shanghai area in the 1920’s and 1940’s. He specialized in a specific type of dress called Qipao and how it was manufactured.

Qipao makers would cut what would be the main body from a piece of fabric, and using the remaining cutouts they would make the collar, bindings and cuffs of the dress. They tried to use as much of the material of a single measure of fabric and waste as little as possible in the process, making a truly sustainable garment.

The other key element in Qipao construction was that they didn’t use seaming techniques to shape the garments. In western dress making, dress makers use seams, which are sewn creases and folds to create and emphasise shapes. In the western dress making tradition this is done to accentuate the shape of the body.

Even though Qipao makers in the 20’s were familiar with this seaming technique, they avoided this in favor of their own, achieving the same shape possibilities through ironing. Using an iron they would heat up certain parts of the fabric to shape the fabric, stretching and shrinking different areas to accentuate curves. It was a critical knowledge of the material that allowed them to achieve this.

Qipao makers favored their tradition because it was easier and saved them time once they mastered it. By avoiding sewing, they saved time calculating what areas they should cut and crease.

Even today, people still use Qipao. I would say it is one of the only traditional dresses that people are still really interested in, being featured often in movies and other media.

Learning more about this traditional making process of the Qipao inspired you in many ways. What did you learn from this old fashioned process that connected to 3D printing?

The first concept was sustainability. The combination of both the traditional Qipao making and 3D printing made me think of new ways to build “slowly”; that is, to think of fashion in a more sustainable way avoiding waste. Both 3D printing and traditional Qipao making are very similar in this regard. Both use as little material as possible, and it’s easy to recycle what’s left behind.

The second concept was modular design. Although not entirely evident, Qiapo construction is very modular; the garment’s different elements such as the collar, the binding and the cuffs and the main body can all be thought of as separate modules. The collar, specifically, is one of the hardest parts to construct when making a Qipao. Therefore, there were instances were several dresses shared a single collar. This lead me to think of ways to build and design garments in a modular way, which was achieved for this experiment by breaking up the design into hexagons.

Tell us more about the nature of the hexagon modules, how did you design them and how did you achieve human silhouettes with them?

All the hexagon modules are the same size, however, the internal cells within are differently shaped. This allowed the modules to take different shapes once bound together as a 3D printed Qipao. The internal patterns were created using parametric modelling done using Grasshopper and other Rhino plugins. This piece has a very conceptual design, but as time progresses we will develop a more commercial version. 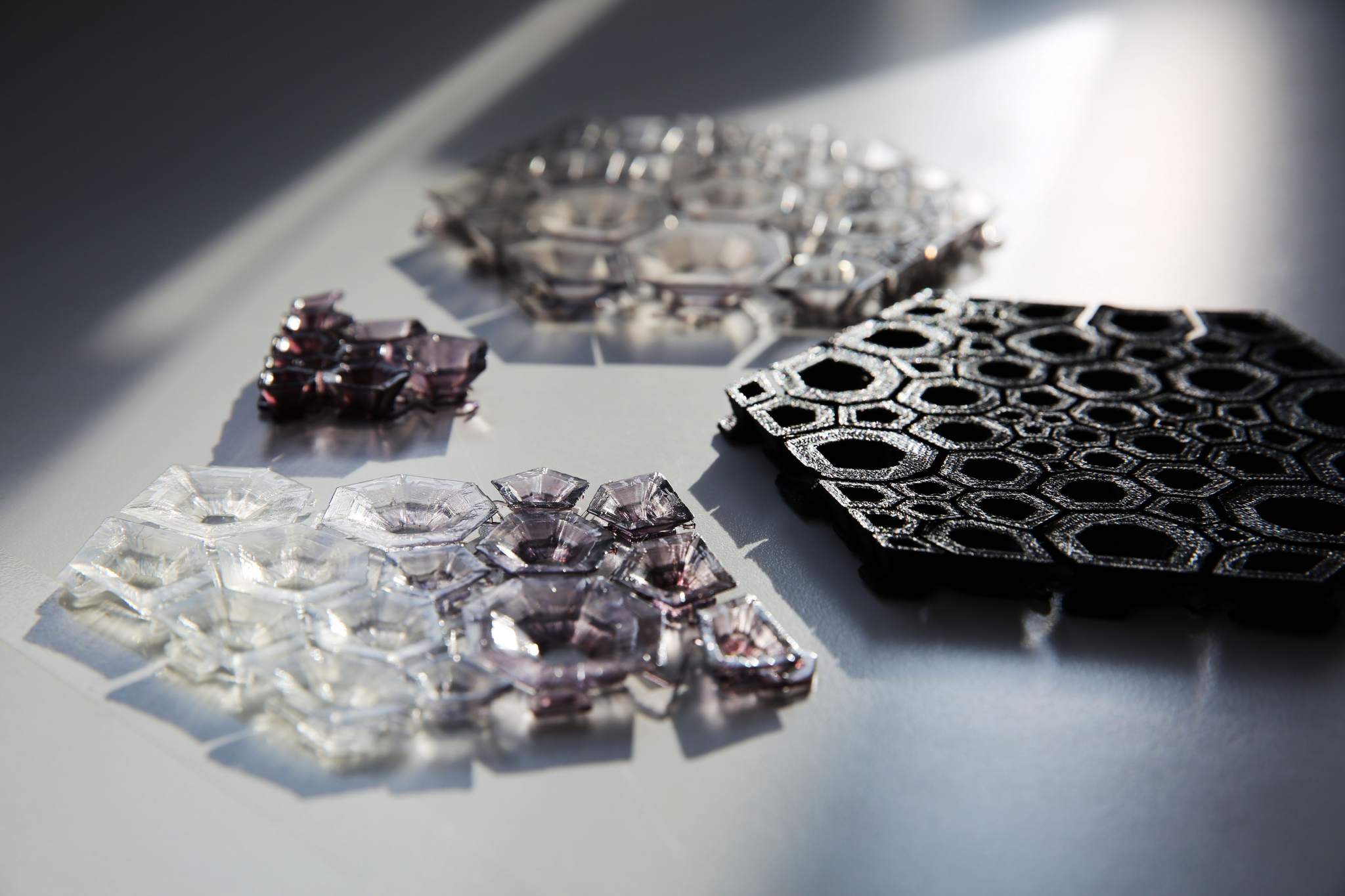 Each module was fabricated using a SLA printer at Royal College of Art, or FDM printers in China. We printed over 200 pieces to make the different Qipaos. The 3D printed pieces were then deep dyed to produce different color effects.

What was your experience like using parametric modelling and 3D printing?

With parametric modelling you input data rather than shape. That’s the reason why I love parametric. It’s almost organic, it allows shapes to grow out of data inputs. From nothing comes something. Grown geometry.

Since I had a fashion design background, I had to get help from architectural resources in order to use this tools. There is a beautiful mathematical aspect to it; while handmade pieces are beautiful because they are imprecise, this combination of 3D printing with parametric design gives an aesthetic precise finish that is also very beautiful. The cell hexagon was inspired by cellular structure and computational designer Alessandro Zomparelli’s work. 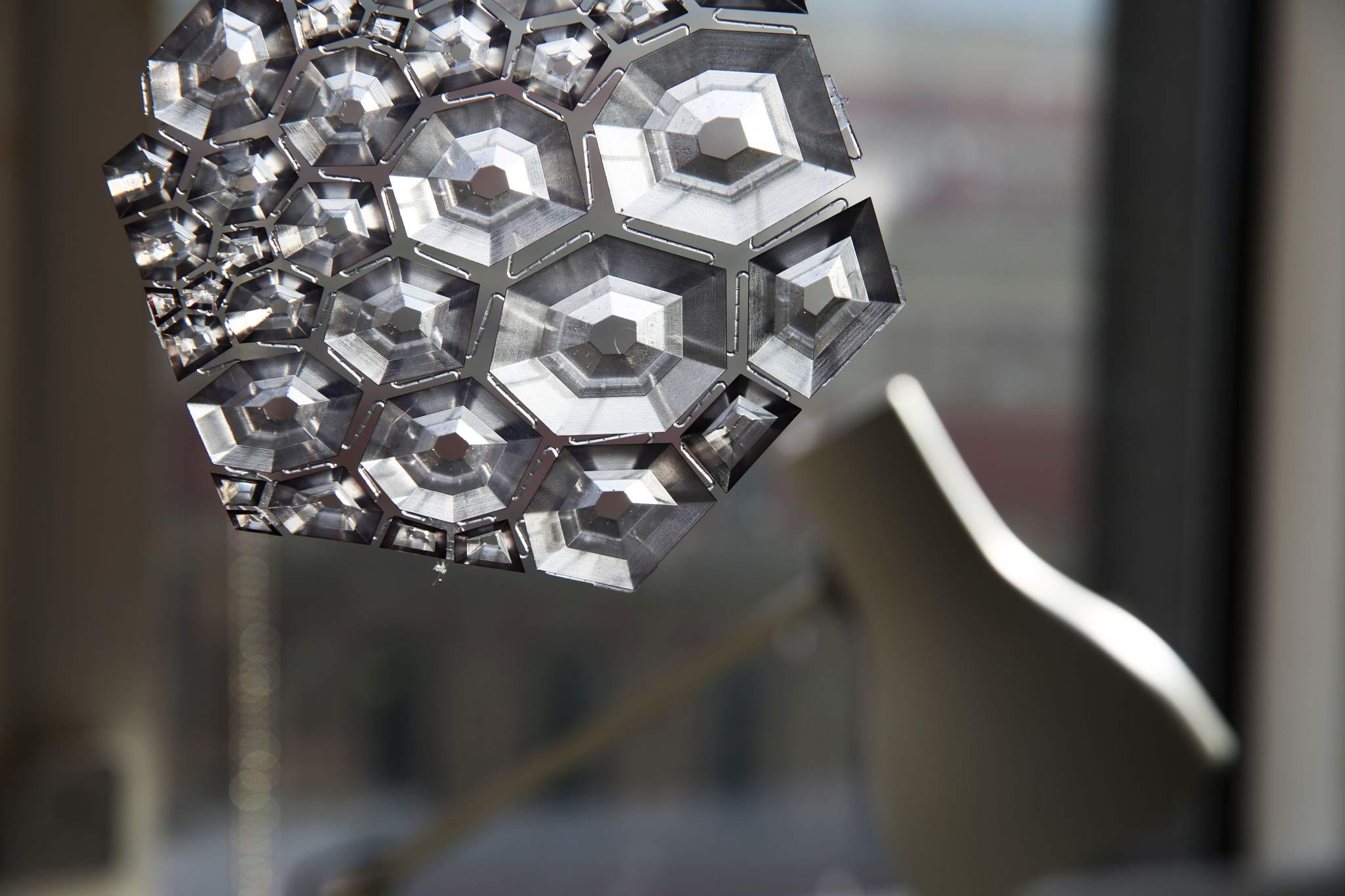 I have faced some problems when using SLA. It tends to break a bit when the connecting threads between the internal shapes aren’t well designed by the parametric modeller. When I dyed the pieces, I had to put it in very hot water which would break some of them.

Tell us more about the project’s presentation, Interfashionality.

Prof. Li and I showcased two 3D printed Qipao along with four other traditional ones as well as other modern interpretations. There was a dance performance that represented the dialogue we were trying to produce. Two dancers wearing each of the two 3D printed Qipao interacted with one another. It was an interpretative dance that at parts almost resembled some kind of combat. It was a metaphor of the conversation between East and West, tradition and modernity, craftsmanship and technology. The idea was to show the similarities in essence of all of these apparently opposing concepts.

What’s the future for this project?

This year I will continue my PhD work, continuing to develop the concept that the fashion design system represents. I think about it comparing it to parametric modelling in the sense that there are inputs that workout to develop fashion products, which can be thought of as outputs. I want to explore that vision.

I am also working to bring a modular design system to my Qipao project. I would like to make a piece as flexible as possible.

I have started researching different materials I would like to use to get better results. There are some intelligent materials that heal, that is, they become a single piece when connected. I think it would be very interesting to link the hexagon modules using that sort of technology. That would be really exciting.

What are your closing thoughts on the relationship between 3D printing and the fashion industry?

However, I don’t want a futuristic fashion to be dehumanized. I think futuristic fashion has to be fun, playful, easy and interesting. I would love to see how technology becomes friendly and intimate to the human user both physically and mentally. This project is my entire next year of work, so hopefully I will develop something valuable. 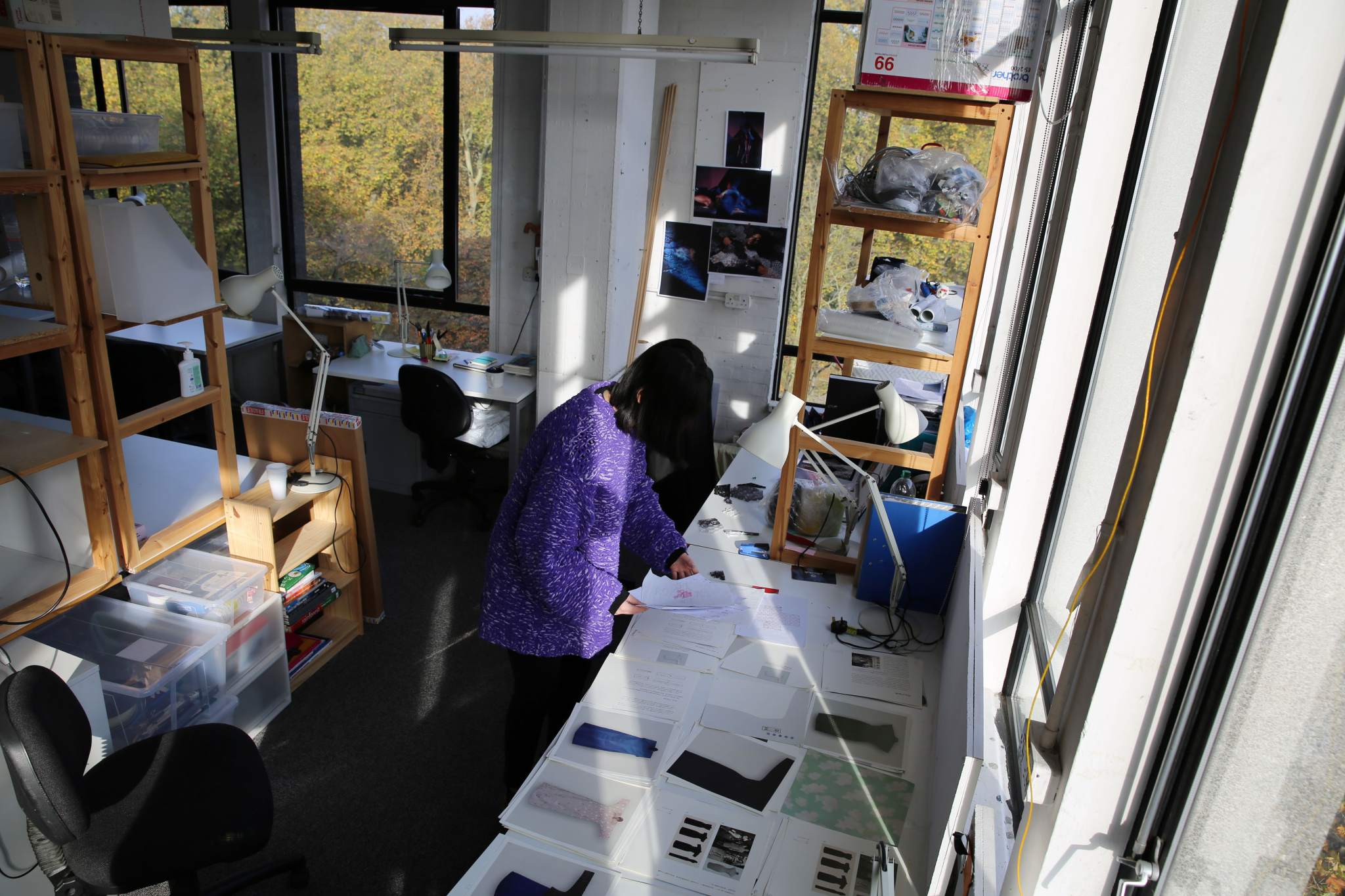 Images taken by Shane Chan and Ignacio Tovar for 3DPI.

Ignacio Tovar is a founding partner of Steed, a small innovation consultancy based in Mexico City and organizer of the futurologi event series. He is currently studying a MSc in Innovation, Entrepreneurship and Management at Imperial College, London. Ignacio is interested in the development of social, economic, design and technology trends as they shape the future.