Stratasys continues its excellent year-on-year non-GAAP revenue increase, with a 39% increase shown in the excellent Quarter 3 results. The long string of acquisitions makes the breakdown fascinating reading — within the past year Stratasys has acquired not only leading rival Objet but also the world’s best-known brand in home 3D printing, MakerBot. Including MakerBot, the company has shipped a cumulative 64,855 systems to date.

Given the hype factor, and anti-hype factor (such as the poor, yet now widely referenced recent Atlantic article ‘Almost No-one Buys 3D Printers’) by non-specialist commentators context is required: this is good news and a continuing strong increase in sales.

“Organic revenue growth accelerated in the third quarter as synergies resulting from the merger between Stratasys and Objet continued to develop,” said David Reis, chief executive officer of Stratasys. “We observed strong growth across multiple product lines that address an expanding range of applications. We also sustained strong gross margins during the period, which was a contributing factor to our record profitability. We are especially pleased by the contribution made by MakerBot, which added $11.6 million in revenue during the period. We are very pleased with our third quarter results.”
Business Highlights: 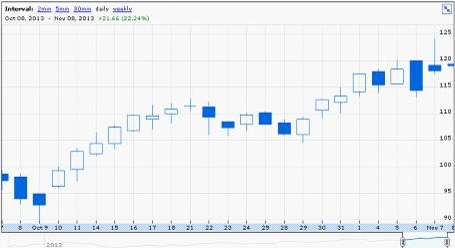 Stratasys share growth over the past month by daily variance

To close, some insight from Stratasys’ online investor webcast:

‘”As we enter the fourth quarter, we believe the acceleration in our organic growth rate, combined with the positive impact from our recent acquisition of MakerBot, will contribute to a strong finish to the year. Looking beyond 2013, we are well positioned to sustain our positive momentum as we accelerate our rate of new product introductions, and prepare to capitalise on additional inorganic growth opportunities. In addition, our industry remains ripe for growth as new and innovative applications continue to emerge for our technology. We are very excited about the future.” – David Reis, CEO, Stratasys Ltd.