This Friday’s first glimpse into the world of 3D models-to-prints comes from a company called ShouldBee, which emphasizes the role of the communal aspect – sharing, debating and voting – in the formation process of the service’s core offering. Category-wise ShouldBee focuses on toys and different collectibles, which are put through a set of evaluative – and iterative – phases before landing their places in the sun, i.e. as a sellable item on the roster. This collaborative approach taken by the company is created by a brand management firm called Ntensify. Harnessing the power of a community – with co-creation flavored methods — centered around a specific interest is, IMO, always a potentially fruitful strategy of developing an interesting and appealing portfolio.

Take a look at the image of ShouldBee’s concept map below, which explains the service quite unambiguously. 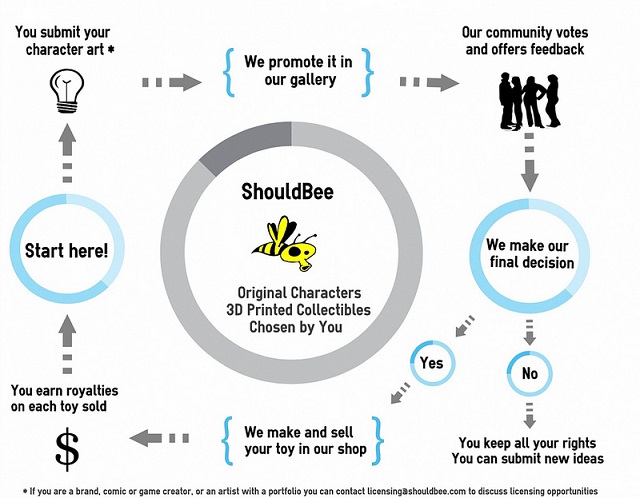 So in short, the designer creates something, places it under communal scrutiny and depending on the final vote ends up being either 3D printed & sold, thus creating royalties for the designer or in the more unfortunate case of thumbs pointing downwards, in the creator’s personal idea bin to gather more momentum for the next round. 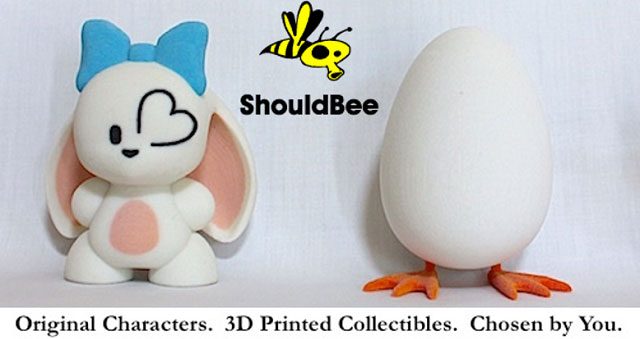 But when the votes are in the right order for the designer, the process might go something like in the video below, which can be appreciated by especially avid gamers, but it also shows off some of the potential this concept has.

There are a lot of neat looking figurines available on ShouldBee, price-wise starting from around $20 – mainly for original characters – and ranging to hundreds with the more license-requiring big brand names such as Avengers characters from the almighty Marvel. Not everything is 3D printed, however, plushes are also included in the selection, but in this field the circle wouldn’t really be complete without them, would it?