MakerBot held a contest recently challenging users to submit designs using their MakerBot Replicator 2 Desktop 3D printers. An artist from the Academy of Art University in San Fransisco submitted his thesis project — and won. Peter Gend, now currently teaching at the Art Institute of Los Angeles, printed representations of Russian Fairytale characters and creatures. The objects are quite stunning and leave Grimm in the dusted corridors of the fantastical.

Peter obviously tested the capabilities of his Replicator 2 saying: “In the end I was able to produce all of my toys, and at much larger sizes than I had planned by making interlocking pieces and at a very fine resolution.”

The winning prize brought Peter $250 worth of MakerBot goods. 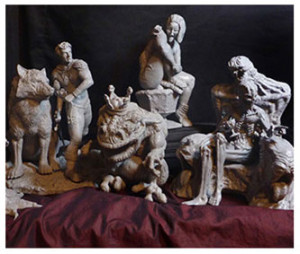 The creatures and human figures carry an air of the dramatic. The detail in form is impressive with warts and fur adorning the printed objects as if meticulously carved by an artisan’s hand. In a way, they are crafted by an experienced artist, but as Peter explained, he sees his objects as toys. The interesting route this contest illuminated is the possibility to print detailed toys that are at once works of art, cultural touchstones and fun for children (not to mention children at heart). During tedious family car rides, my brother and I would excite ourselves thinking about the kind of toys we wished we could make, the monsters and heroes of our imagination. Peter took his imagination forged by the haunts of Russian Fairytales and turned his images into reality. The award is deserved and excites the childhood and literary nerve.