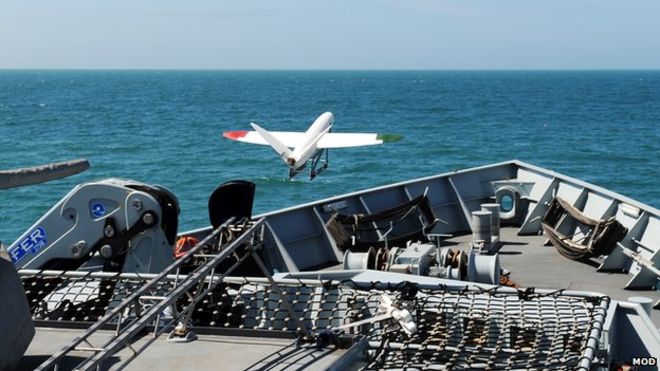 The British Royal Navy, launched in April 2016 a 3D printed Unmanned Aerial Vehicle (UAV), commonly known as a drone, from the HMS Protector to help the ice patrol ship navigate through the Antarctic. This drone, dubbed SULSA, relays detailed pictures of the surrounding area to the ship from a perspective that is only available from the air. SULSA represents a large step forward in the Navy’s quest to use cutting edge technology to update warfare tactics and equipment.

The laser sintered aircraft, printed from four major parts and assembled without the use of tools, was built from nylon by the United Kingdom’s University of Southampton. The world’s first ‘printed’ airplane is controlled by the ship’s crew from a laptop. It flies at the speed of a car, about 60mph, with a tiny engine that assures a quiet flight. SULSA cost $10,000, making it cheaper than one hour’s flying time by a Royal Navy helicopter.

SULSA was successfully tested last July, proving that drones are effective in providing surveillance and maritime patrol. Continuing research may show that SULSA’s surveillance-only platform can provide weapon targeting data. It seems likely that fundamental changes will be made in naval operations with the continuing development of drone systems.

The possibility exists that 3D printed drones can be used for complex wartime operations. They may prove effective in coordinating on-call strike support among warships, providing communications when satellite systems are compromised, and acting as tanker aircraft to extend the range of others. The Royal Navy’s ultimate goal is to give a drone full autonomy so it can ‘think for itself.’

In the future, warship crews will build, configure, and reconfigure their own ‘air groups’ to suit dynamic operational requirements. Drones are lightweight and they take up little space so they can be used even on small ships. Perhaps most importantly, in the face of economic reality, 3D printed drones offer ships greatly enhanced capabilities at a relatively small cost.

British scientists and engineers have developed images of what a Royal Navy vessel will look like in 2050, and they have determined that drones play a big role in future warfare. Features of the vessel include a 3D holographic command table, an acrylic hull that can be turned translucent, laser and electro-magnetic weapons, and a fleet of drones all built on board with a 3D printer.