ROW: A brighter future for refugees?

Syria is a land torn apart right now, but a network of activists and technology buffs that make up Refugee Open Ware (ROW) have come together to teach displaced refugees the art of open source technology, 3D printing and more in a bid to give them a brighter future.

More than 4.8 million people have been forced to leave their homes in war-torn Syria. 630,000 have found a home in Jordan and more have made the treacherous journey across Europe, despite the best efforts of the border security forces and immigration officers in a variety of countries.

Many of those in Jordan have been left destitute, some of them have life-changing injuries. When they arrived in Jordan, the future was bleak.

ROW is made up NGOs, academic institutions, activists and corporations that want to teach these refugees new skills that can help them build a better life. The Creative Heroes of Syria and even Ultimaker are involved. They work in conflict-affected countries and look to maximise donations by creating commercial angles and training that can help people go on to live full lives.

Many of these refugees may even return to their homeland when the fighting is finished the help rebuild. With a range of hacking, 3D printing and other manufacturing skills, as well as the basics of open source technology, they should be in a much stronger position to find work or forge their own path.

It might seem like a disparate and impractical set of skills. But ROW was founded to create prosthetic limbs for Syrians that have suffered serious disability during the conflict.

It all started with a leg

David Levin and Loay Malahmeh founded the company 3D MENA, which is part of the ROW consortium. The pair worked with Asem Hasna, who lost his left leg in the Syrian conflict in 2013. He was determined to fix his own issue and learnt about bionic prosthetics.

Then he got access to a 3D printer and created a new foot on his own initiative. He was on his way to making his own replacement leg and this informal advice led Levin and Malahmeh to create a training program. You don’t need to have lost an arm or a leg to use the skills they teach either.

15-year-old Khaled Al Masri had broken his glasses and simply didn’t have the money or the right place to get new ones. So he printed a new arm for his glasses and now they’re almost as good as new.

He went on to design and build his own castle, which is as much a symbol of hope as it is a new skill. Now the youngster has set his sights on becoming a prosthetist and helping others with this technology. 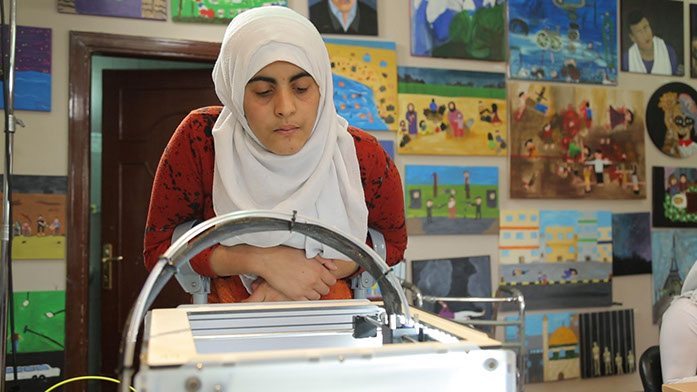 Shock to the system

A metal walker provided to 18-year-old Olla Allkout was crude and uncomfortable. She managed to print rubber pieces to act as shock absorbers that gave her a better quality of life. They may be small things, but the sense of accomplishment that goes with learning the skills, as well as the chance to do something new after such a traumatic time, can make a world of difference to the people ROW works with.

Having given these refugees the chance at a better life and a sense of purpose, the pair are now looking into creating a FabLab in Amman, Jordan, which will be fully equipped for fabrication. This could be joined by a second lab in Irbid, near the Za’atari Refugee Camp. This will give those refugees a chance to fix their own problems and train for a better future.