Rokit Turns Up the Heat in South Korea

The company’s first printer, the Edison+, was well received, but suffered from a slight image problem internationally owing to the fact that it looked a lot like the MakerBot Replicator 2, leading some people to mistakenly think it was merely a cheap knock-off.  Rokit’s new models promise to do away with any doubts about the company’s earnestness regarding innovation, as the new machines boast some very surprising attributes. 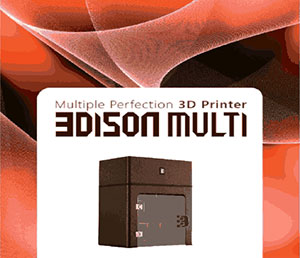 First is the new “Edison Multi,” a creator’s machine.  It boasts a 280x160x190mm build volume, has a maximum resolution of 25 microns, can print at speeds up to 300mm/sec, incorporates dual extruders, a build plate automatic levelling feature, a heated build platform, an embedded back-up battery (in case of power failures), an internal WIFI camera, an integrated laser cutter and interchangeable extruder heads!

This allows the printer to utilize either a filament-style feedstock, or by swapping heads a syringe plunger-type print head, to print in any available paste material.  This means you could be printing one object in PLA or ABS, then switch to chocolate or metal paste. And for an added kick, after you are finished printing, you can insert a sheet of plexiglass or wood and use the laser cutting feature to create a custom gift box for your printed objects. Now that’s versatility! 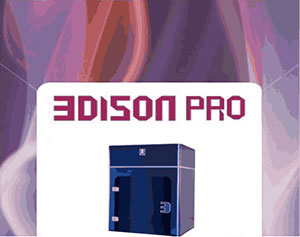 The second model is the “Edison Pro,” which is aimed at prosumers and small businesses who want rapid prototyping capabilities. And rapid seems to be the key attribute of this model. According to the company, the Edison Pro can print at an astonishing 1000mm per second in what is called its “acceleration mode.”  I do not know yet how they have achieved such a blistering speed, but we will be following up for certain!

Again, according to the company, the Edison Pro prints from 40mm/sec up to 1000mm/sec and from as fine as 25 microns up to 600 microns of resolution. It comes with a 300x205x250mm build area and auto-levelling/cleaning system, an embedded battery backup, dual extruders, laser engraver, internal LED lighting, heated build platform and a WIFI camera. 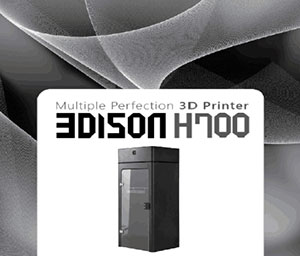 The last model in the new range is the monstrous “Edison H700,” which has one of the largest build volumes we have yet seen.  The actual size of the H700’s build chamber is 290x205x700mm. At 700mm tall, which is about 27.5 inches, the H700 is nearly 9.5 inches taller than Makerbot’s new Z18. Comparable with its two new siblings, the H700 also sports many of the same features.  Like the Edison Pro, the H700 can print at speeds up to 1000mm/sec, uses a wide array of materials, possesses an auto-levelling/cleaning system, embedded battery backup, laser engraver, a WIFI camera, dual extruders and three different nozzle sizes.

In addition to each machine’s individual attributes, all three are compatible with a wide array of build materials. The machines can reportedly all use either PLA, ABS, Nylon, PVA, HIPS (High Impact PolyStyrene), certain engineering plastics such as Polycarbonate and Polyetherimide, Flexible, Wood, Stone, Ceramic, Metal Paste, Chocolate, and pretty much any other food paste.

For me, here in Korea, this is an amazing collection of machines, from such a relatively small company, that has generated quite a bit of interest in Asia where innovations are usually tied to large corporations of the Samsung or LG class.  On the day of the Rokit announcement, no less than twelve different Korean media outlets covered the story, many of which then had their stories retransmitted overseas.

The excitement about this company is not misplaced. When I first interviewed Yoo Seok Hwan, the president of Rokit last September about their then current machine, the company had but 25 employees and a single main product.  Eight months later, they have doubled their number of employees; boast a portfolio of four machines, a complete line of feedstocks, and accessories.  There is even talk that they will be introducing their own SLA machine sometime in the not too distant future.  While the company was not too specific as to when the new SLA machine may be released, we do know that Rokit will be one of the two platinum sponsors of the Inside 3D Printing Conference and Expo coming to Seoul this June.  The other is Stratasys.

In addition to Rokit’s products being available to the general public here in Korea, some are currently being used by SK Telecom, one of Korea’s largest cellphone providers, to print out custom cellphone cases on a per customer order basis.  We were also told that Rokit just recently sealed a deal with a reseller to distribute their machines in Japan.  You can see the new machines in the promotional video or visit the company’s website.  But keep your eyes open in your home market as we were told that they are actively looking to expand overseas, so a Rokit retailer may be near you soon!