We have seen quite a few examples of 3D printed objects being tweaked with different structural software and algorithms – for example by hollowing out or adding new parts in order to make them lighter and/or more durable. On that note, we bring you a story of a similar kind – but applicable on a larger scale. A team of scientists have been studying the use of 3D printed fractal structures in order to make light-yet-strong objects, that could be used for instance on 100m solar sails (to gather solar radiation) or closer to the ground in crane booms.

The idea of fractal as an optimal structure for both saving weight and achieving maximal durability is not a new one – fractal patterns can be found in nature and they come in all sizes and colours. The inspiration for this project, however, comes even closer – from human anatomy. There is a bone in our body called the trabecular bone, which can be found near the joints and represents a sponge-like quality with a pseudo-fractal pattern. The key idea behind this is the same – save weight while gaining durability – and the applications of such an approach are vast . Notable examples of the same fundamental ideology can also be seen in some man-made environments, such as the Eiffel tower or in large cranes. However, the engineering and building process behind these constructs differs strongly from this new approach, where the key process steps can be repeated – i.e. there is a theoretical framework for obtaining the optimal structure according to the weight the object needs to withstand. 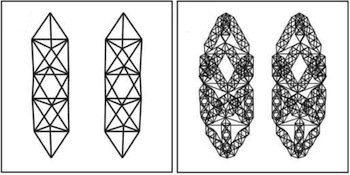 Visualized above are two so-called generational changes – phases of the design process – where the balance between the ideal strength and lightness is sought. Basically, a ‘generation’ translates to replacing the beams with a version of the entire object – and repeated up to two times for a generation-3 object. The structures are produced with polymeric resin on 3D printers and then tested to see if they withstand a sufficient amount of pressure and weight. The team has calculated that the more hierarchical levels – those generational images – are used, the less material is needed to support the needed weight. 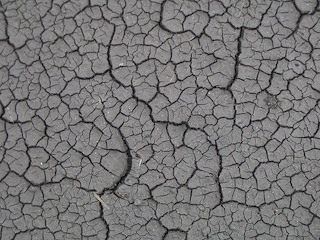 On a concrete level the potential results based on calculations are impressive: the researchers have come to the conclusion that a crane boom, for example, created in such way would be 100 times lighter compared with one made out of stainless steel – and that would be by using a generation-1 structure. If the earlier mentioned solar sails in space were created by using generation-3 structures, they would be 10,000 times lighter than solid beams.

However, when adding new structures – generations – the challenge is of a similar kind to many other intricate and complex 3D printing projects: how to maintain the required accuracy and remove all imperfections, that could emerge due to the hardware (and of course not forgetting the human factor either). As the tech continues to evolve, this problem is likely to be solved enabling at least the first generational steps towards structures of a new kind. Therefore we will be eagerly waiting results from further studies – both academical and commercial ones.

The full paper can be downloaded from Physical Review Letters