Last month, we relayed news of the DesignSpark Challenge, in which users of the free DesignSpark CAD software could submit CAD inventions for the chance to win the latest RepRapPro 3D printer, the RepRap Ormerod.  At the time, however, there were no details about what the Ormerod was, exactly.  On December 2, Adrian Bowyer, the original RepRapper, officially released the Ormerod 3D Printer with news of its first international distributor. 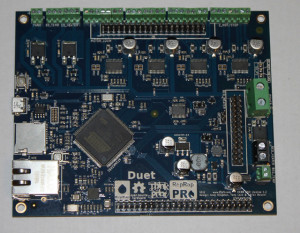 Named after entomologist Eleanor Ormerod, the RepRap Ormerod is meant to be quick and easy to build (about 1 to 2 hours for the RepRapPro team), has a heated build platform, a print volume of 200mm3, pre-assembled wiring loom to remove the need for soldering, and a 1.75 mm extruder drive.  The printer, in the tradition of RepRap, is open source, as is its new 32-bit controller, the Duet.  Designed by the RepRapPro team, as well as Chris Palmer, Andy Hingston, Tony and Roland Lock andThink3DPrint3D, is similar to the Arduino Due, programmable via the Arduino IDE, and can be controlled with new RepRap Firmware created by RepRapPro.  With a USB and Ethernet ports, the Duet can be managed via direct connection or through a web browser.  There is also an SD slot for untethered printing.Interestingly, according to the company’s site, the firmware uses “bed-plane correction and orthogonal axis compensation”, so that the printer will “print more accurately than [when] the RepRap was put together.”  It should be noted that the machine is currently only available with a single extruder, but there will be an upgrade kit to add up to two more printheads in the near future.

After the launch of the DesignSpark Challenge, from RS Components, it’s no surprise to learn that the new printer’s first distributor is, in fact, RS Components. Though RepRapPro will sell the Ormerod themselves in 2014, you can currently buy one through RS here.  The first 500 models sold through RS Components will be accompanied by a certificate signed by Adrian Bowyer.  To see a video of the Ormerod RepRap print the traditional RepRap coathook, watch below: