Of the roughly 30 3D printers on display at CES 2014, the Regenovo bioprinter was definitely the only one that could potentially save your life in an instance of acute organ failure. But not for another 15 years or so. That’s because the recently announced Regenovo is the latest in a line of medical grade 3D bioprinters that is still under development and showing promising results. Coming out of the Hanghou University of Science and Technology in the eastern Zhejiang Province of China, the Regonovo has already produced numerous gelatinous, semi-transparent 3D printed ears, kidneys and various other conglomerations of cells in sterile environments. The printer uses medical polymers, live cells, inorganic and hydrogel materials to create a scaffold from which cells are cultured to create living tissue.

Part of what lead research and, Professor Xu Mingen says, still requires refinement, is the size of the cells. The printer uses an 80 micron printer nozzle, which makes the 3D printed cells about 5 times larger than normal cells. Longevity is also an aspect they are trying to improve upon, though the results they have been turning out are reportedly good. During the printing process, about 90% of the cells are alive, and incubated cells have been able to survive for up to 4 months. The hardware itself measures 60 x 50 x 74 cm and is still evolving. According to Xu, “Before printing you can preview the print path of each layer and determine suitable speed and temperature. But the system is not yet smart enough; sometimes you have to control it manually.” 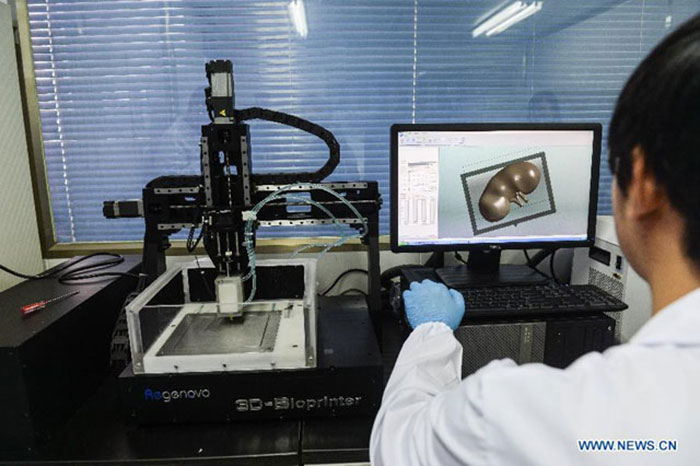 Other companies and academic institutions have been on the 3D bioprinting scene before the Regenovo was announced in summer of 2013. Cornell University is working on 3D printed spinal discs, while the University of Iowa had a two-armed 3D bioprinter which can lay down different types of cells simultaneously. San Diego-based company Organovo is testing out cancer drugs on specific cell types. And Wake Forest University has developed a method to scan and print layers of skin cells on burn wounds.

Currently, scientists project that a living 3D printed liver or kidney will be available for transplant in another 10  to 15 years. For now, mini noses and ears take about an hour to print, which is good to know.