My name is Christina Chun and I am a recent graduate from the Academy of Art University with an MFA in 3D Modeling. My journey to and through 3D has been a long and interesting path, which started in the mid 1990’s when I began dabbling with an early version of Photoshop and minor web design. After High School, I thought I wanted to take my web designing further so I enrolled in a Digital Arts & Technology program. It wasn’t until the end of that program that I discovered 3D and just fell in love with it!

When I graduated in 2003, I attended Siggraph in San Diego and the conference just blew me away — it was amazing to see all of the emerging technologies. One of those technologies was rapid prototyping! Of course, at that time the machines were out of the reach of consumers, but it has been a dream to own a 3D printer of my own ever since. Siggraph 2003 introduced me to 3D printed maquette sculptures and movie props, which inspired me. I subsequently moved back to San Francisco, CA and enrolled at the Academy of Art University for a 2nd BFA in Game Design with an emphasis on 3D modeling but found that I wasn’t as passionate about video games as I had originally thought. So when I finished that program, I entered the MFA modeling program.

For the past 11 years, I have been freelancing and consulting on various projects ranging from web design to graphics and even some 3D printing and now that I’m finished with school, I would like to be a 3D modeler for animated feature films, make toys and eventually teach 3D.

You only live once right?

I have watched the industry for almost a decade and kept up with the latest pro-consumer 3D printers emerging during recent years, but it wasn’t until the last six months that I really made up my mind to purchase a 3D printer myself, which was made easier by crowd funding websites such as Kickstarter and Indiegogo. Indeed, these sites allow many people, from so many different disciplines to bring their ideas to life, including artists — I have watched quite a few artists bring their toys to life with the help of those crowd-funding platforms. So the idea of bringing some of my ideas into the world utilising 3D printing was the obvious — albeit scary and exciting — next step for me to pursue! I just knew that I would feel terrible if I didn’t at least try.

Shortly after attending Siggraph again this past summer, as luck would have it, 3D Systems hosted a contest called the Cubify Challenge to win one of their new Cube 3D Printers. I really wanted my own 3D printer and this seemed like a great opportunity, so I submitted a range of designs to the contest and my bracelet design was selected as a top 5 finalist!

I didn’t win  — I think it was a blessing in disguise though. It turns out, the cost of printing models on a Cube is quite high. I also looked at Solidoodle 2 and the Makerbot Replicator 2 but then I found Afinia — or, rather they found me — on Twitter! The printer looked familiar, as it should, it is a re-branded UP! 3D printer that Afinia has made FCC compliant with some other enhancements/adjustments and it comes with US telephone support.

I ordered via Amazon and purchased from Octave (reseller), who happen to be local to me in San Jose, CA and I literally got it the next day! I had seen various videos of both the Afinia Hseries and the original UP! 3D Printer — 200 microns? Sounded good to me. Then PP3DP released a new version of their UP! Software, which the Afinia can also use — I could print at 150 microns! It can also print using either ABS or PLA plastic filament unlike the Makerbot Replicator 2, which now only uses PLA. Another comparison I couldn’t help making is that the awesome looking Replicator 2 does have a larger build size (11”x6”x6”) and increased cost ($2199) against the Afinia H-Series’ smaller build size (5”x5”x5”) for $1499. I initially thought the Afinia might be too small but in reality, it is more than enough for most things I can dream up for my applications. Plus, when I want something bigger, I can print out a model in stages and then put the separate pieces together.

If size really does matter to you though when looking for a 3D printer, I don’t think these printers are good solution. Like purchasing a computer, save for the best machine you can afford or build — it really is worth it in the end I think. 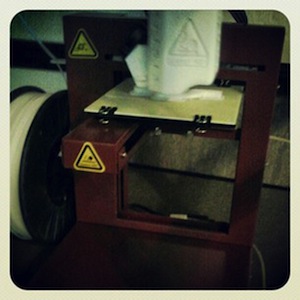 When my Afinia H-Series 3D printer arrived setup was quite simple. I took the printer out of the box, followed the unpacking instructions — it took me a few minutes to remove a few clips on the printer that keeps it safe during shipping, attached the filament hanger, attached the filament and fed it through the filament guide. Then I installed the software it came with, followed the rest of the directions for loading the filament as well as calibrating the nozzle and attaching the perf board to the platform. Quite literally I had everything done, setup and was printing my first model within an hour!

I downloaded some .STL files of useful things from Thingiverse to use as test prints.

What’s also nice is that the Afinia is packaged with some extra supplies such as a starter spool of filament, gloves, putty knife, exacto knife with blades, snipping pliers, tweezers, and other extras for your printer. The software also builds some pretty great support material from a single extruder and it breaks off easily from your model. The more intricate your details are, the tighter the spaces will be to pull out the break away material.

The software is super easy to use. I took my models straight from 3ds Max or ZBrush, exported an .STL file, opened it in the Afinia/UP software, it loads up and calculates the layers, then prints! You can tweak the settings similar to a regular printer adjusting the layer thickness, fill settings and support material. SIMPLE!

As an Artist first and technical person second, I thought I would need to take my file into some other program, fix it somehow, put it through some slicing program, then into some other program that only that 3D printer can read. Nope. The software that ships with the Afinia H-Series 3D printer is all you need aside from your 3D program that can export your designs to an .STL file. I’ve printed from both the Afinia and the updated UP! Software. Both work great. 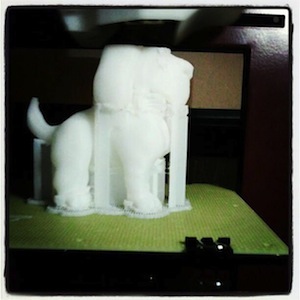 After my initial trial runs with printing .STL files from Thingiverse, I dove head first into trying to 3D print my dog model from my thesis “The Little Pastry Chef”. I rushed the first try and didn’t fix problem areas or even just double check. I was too excited to try and print him. With the first print, his ears have a bit of a thin layer issue so it didn’t hold up while 3D printing and he ended up having a big hole in each ear. The second time around, I thought I had fixed the issue by making his ears thicker. Apparently, I didn’t make them thick enough all the way to the base of his ear. He had two tiny holes still. Even though this little guy didn’t print 100% accurately, he still looked great! Not the fault of the printer — but the modeler, me!

I’m learning as I go! In fact, I don’t know anyone who owns a 3D printer personally. Most forums that I browse through do not even have the answers to the questions that I had prior to looking for a suitable 3D printer for the type of work that I wish to use it for. As a modeller, you traditionally only think about what’s on the screen or how it’s going to move or print on paper. As a 3D modeller for printing, you have another set of rules to follow! I could go on and on but it’s really only my fifth day with the printer! I’m having so much fun with it and the possibilities really are endless.

Of course, most of the things I wish to create don’t serve a practical use other than as a piece of art but I’m still enjoying this new process. I have yet to begin printing anything for my new toy line — my ultimate goal — which is still in the development stage at the moment. I hope to launch something by December either on Kickstarter or Indiegogo. Like anything though, the start date could change.

As for 3D printing — it will only get better and cheaper in my opinion, as the entry-level and the professional level converge. But while I love it, it is important to remember that a 3D printer is just a tool and there will always be a need for modelers. I also think that many children and teens would benefit from learning 3D early on and I’d love to see more women get involved with 3D printing.

Finally, I’d like to thank Rachel for asking me to write this and for letting me ramble on and I hope that something of my experience will be useful to someone in a similar situation!

I also hope that in a few months I’ll have some exciting toys and other projects to share with everyone!

Until then, keep on making! 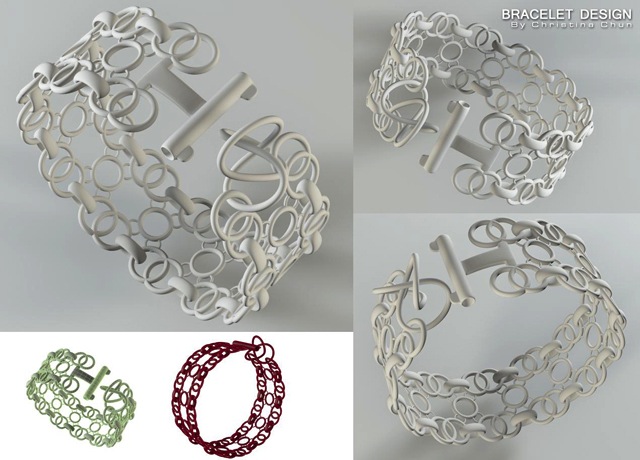 Christina Chun is passionate about 3D technology and has a love of many different genres of art. From blood and gore to the cute and fluffy as well as everything in between — she would be happy to make 3D models every day! Christina enjoys learning how things are made and how they work with knack for visualizing parts and products and how all the pieces will fit or form together. With a generous propensity for helping, teaching and sharing what she learns with others, Christina confesses that she herself is a lifetime student and will always try to improve her art.