We’ve had the joy of bringing you several new potentially game-changing medical apps enabled by 3D printing recently and today is no different. Project Andiamo is a case of attempting to combine 3D printing, 3D scanning and biomechanics in order to create better fitting and lighter prosthetics and body braces – especially for children – in a way that they would also be as accessible to as many people as possible.

As with many inspiring medically oriented projects, the need for all of this was motivated from immense human suffering. Naveed and Samiya Parvez, the founders of Project Andiamo, had a son named Diamo in 2003 who was diagnosed with cerebral palsy. He was also quadriplegic and had little-to-no head control, creating an almost constant need for different kind of braces to help keep his posture from causing more damage to his body. After struggling to gain medical assistance to help with Diamo’s posture, the Parvez family received information of a company focusing heavily on orthotic appliances and equipment.

From this company the family received a made-to-measure body brace for Diamo, but this was preceded by long sessions of laying absolutely still for the moulding process – something that’s very challenging for a young disabled child. But an even more relevant disadvantage of the traditional body moulding process was the requirement for precise measurements, as even slight movements during the process can make the final brace – which takes from 4 to 13 weeks to finish – unwearable, causing bruising and other sores. Not to mention the fact that Diamo was still just a child and thus growing, which meant that the excruciating process had to be repeated over and over every 6 to 9 months.

Braces made by this traditional methodology also demanded significant adaptations to the wearer’s environment causing additional stress, such as adjusting everything from the wheelchair to actually fit in it to wearing only seamless clothing to minimize physical damage such as bruising. 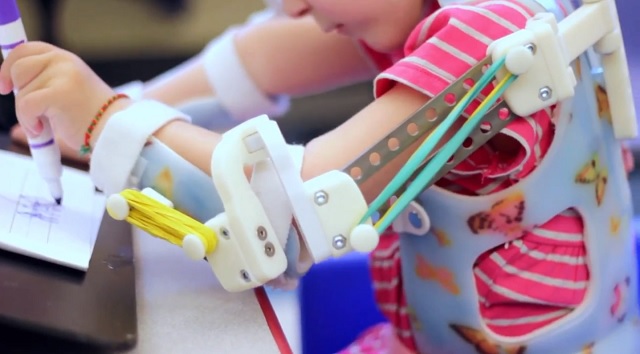 However, after the couple saw the story last year of Emma, a young girl with 3D printed exoskeleton arms, they realized that there were alternatives — beyond the conventional moulding technique — for creating more user-friendly prosthetics and braces. Wanting to explore more of the ideas made possible by 3D printing, Naveed Parvez attended the Monki Gras tech conference, where the absolute moment on enlightenment came courtesey of Chris Thorpe, who while on stage, presented his project on 3D scanning historical locomotives and preserving them for posterity by creating scale model sets out of them. Later that same night Naveed struck lucky when he happened to sit at the same table as the organizer of the Monki Gras conference, James Governor. Not wanting to miss the chance, Naveed explained his idea of 3D printed prosthetics for children, which ended with the two agreeing on making such a prototype.

Compared with traditional prosthetics and braces, Project Andiamo would ideally produce applications that are easy and fast to personalize precisely in terms of size and shape through 3D scanning. This approach would also enable creating a biomechanical model of the user in order to simulate how the end-product would affect him/her in real live situations – with basic functioning, but also regarding other aspects such as fitting in the wheelchairs, seats and other objects, which would make it possible to modify them beforehand.

This leads to today and the current phase of the project. The team behind it is looking for partners for both funding and knowledge sectors. The idea is also to create the project with as much of an open-source ethos as possible, so if you are an expert on financing, 3D scanning or printing, in the relevant medical sector or have a background in biomechanics, why not head to the source link and contact the Parvez family to help them succeed in their dream of helping other families in similar situations – unfortunately the Parvez’ own son Diamo passed away in March of last year.  The fact that they still want to press on with this project to alleviate the pain and suffering of other children speaks of the sort of people you will be helping in doing so.