Printrbot has always been big into education.  Since founder Brooke Drumm’s first Kickstarter video, the brand has emphasized the ability of 3D printing to spur STEAM learning.  At the various 3D printing conferences I’ve attended, I’ve also heard kids and parents talk about how Printrbot, specifically, has gotten young people excited about the technology due to the brand’s affordability.  It’s no surprise, then, that the manufacturer is pushing its educational efforts more officially with Printrbot Learn. 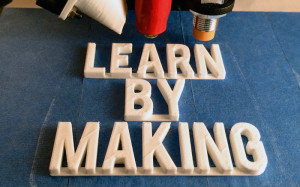 Sponsored by Printrbot and headed by teachers, Josh Ajima and Clarence Fisher, Printrbot Learn is an educational network that hopes to inspire learning through 3D printing.  The community will host tutorials and lesson plans for teachers to implement the technology in their classrooms.  Additionally, the site will feature contests meant to further infuse education with the fun of Making.  Printrbot Learn also has a blog that publishes stories of designers and Makers to illustrate the impact of 3D printing and Making in real world classrooms (and the classroom of the world itself).

So far, on Printrbot Learn, you can read a couple of stories about real Makers and their use of 3DP for educational purposes.  You’ll also see how the team came up with the Printrbot Learn logo, a useful glimpse into the design process.  The site has only just begun, so we’ll have to wait to see what sorts of curricula and lesson plans the team has in mind.  In the mean time, if you’ve got your own ideas on how to best incorporate 3D printing into education, join the Printrbot Learn community at learn.printrbot.com.