Image based social networking site Pinterest is proving a useful — and popular — tool among the burgeoning 3D printing community. Just as Google+ is the network of choice for makers, and Twitter sees over a hundred 3D Printing news sources now, Pinterest is seemingly the place to be for the visual appeal of additive printables. There may well be potential for 3D repository web teams to look to Pinterest for extended revenue input ….

There are, let’s be honest, (too) many social networks to choose from now. Most of us simply do not need many of, or any of, the endless string of networking tools presented to us in the digital revolution. But they do make quality transactions of ideas, feelings and processes more fluid and efficient for those who engage in ideas, and distant people, for work and play. 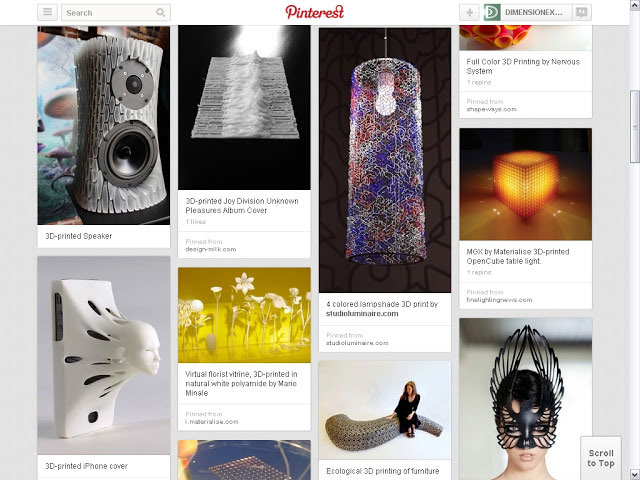 Gamers and the purely personable find themselves on Facebook. Personally, I use m.facebook.com to avoid the clutter, notifications and adverts. Programmers, technology fans and makers typically utilise Google+ as a platform for facilitating the exchange of ideas. It can be a victim of it’s own graphic arrangement sometimes however. LinkedIn is great for professional networking, particularly now that it is more aesthetically functional (if still feature heavy).

Pinterest, specific to a visual niche, is simple, quick, effective and offers little in the way of unwanted distraction.  It makes sense, therefore, to see a growing string of 3D printed objects gathering there.  Pinning (copying an image with link) from 3D file repositories is pretty simple too. This, for example, creates a way of extending Thingiverse’s board sharing mechanism (which is very Pinterest like) beyond Thingiverse’s user base. Indeed, perhaps as much as, if not more than, Google+, Pinterest offers a way for 3D file repository creators to draw in new crowds who may not currently consider what appears, in their minds eye, still to be a technical leap for them. I head over to Pinterest once a day now to add new 3D printed items to my board for 3D-printables.

It makes a pleasant break from concentrating on words for articles and files for print. Not as pleasant as a walk outside — I have a thing for getting technology enthusiasts unchained from their desks at the moment — but it’s certainly candy for the eye, inspiration for the mind, and, often a smile for the lips too.