If you invested early enough in 3D printing stocks and can now afford a brand new Porsche, you should probably familiarize yourself with Porsche’s online Car Configurator. It lets you chose the model you desire, exterior and interior colour, seats and tens of options for the perfect car. While you do that, you can also choose to switch to 3D mode, and visualize your four-wheeled dream from all angles in gorgeous details, in day time or at night, with front headlights on or off, interior and exterior. 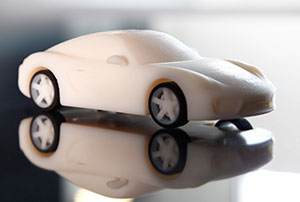 Designing your Porsche can be a rewarding activity even if you are not about to actually purchase one. More so if, instead of stocks, you bought an actual 3D printer. For you Porsche just released a printable design of its Cayman model. Don’t get too excited, it is not a real car to print in one of those gigantic ExOne or Voxeljet 3D printers. For now it is just a toy but it may be a glimpse of things to come.

Porsche published the .STL file as a free download from its website. To visualize it, we used the free Meshlab software. It is not entirely clear what Porsche’s goal is other than begin to implement some kind of 3D printing support and give its 3D printing-enabled fans something to play with. Porsche also suggests printing and colorizing the Cayman, then pasting the results as a post comment on the company’s social network pages. 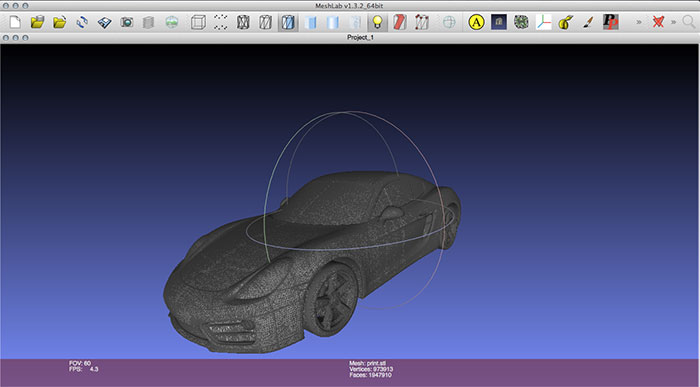 In fact, direct manufacturing of small numbers of car parts and components is the next frontier for industrial 3D printing. Entire Porsches 3D printed locally are probably a long way down the Autobahn but small replacement parts 3D printed locally in plastic or metal carry a great promise for both the auto and the 3D printing industries.

From the video released by Porsche I would go as far as to venture that the technology being used to 3D print the model is Stratasys’ Polyjet. In fact Stratasys is an important supplier of 3D printers for car manufacturers. I recently had the opportunity to speak about it with Tim Heller, Stratasys VP of global channel development.

Nowehere on the page are there any references to the size of the Porsche’s model which, of course, can be easily modified in the virtual environment. On the other hand the physical output will depend on the size of the printer that you have access to. Maybe that VX4000 would come in handy after all.