Last year, you probably saw a butt plug shaped like Putin rolling around the Internet.  The story was published everywhere, not just your ordinary 3D printing sites. From The Huffington Post  and Gawker to French, British, and New Zealand TV, the Putin butt plug became infamous as one of the first pieces of printed political art.  But who is the mysterious artist behind the butt plug? 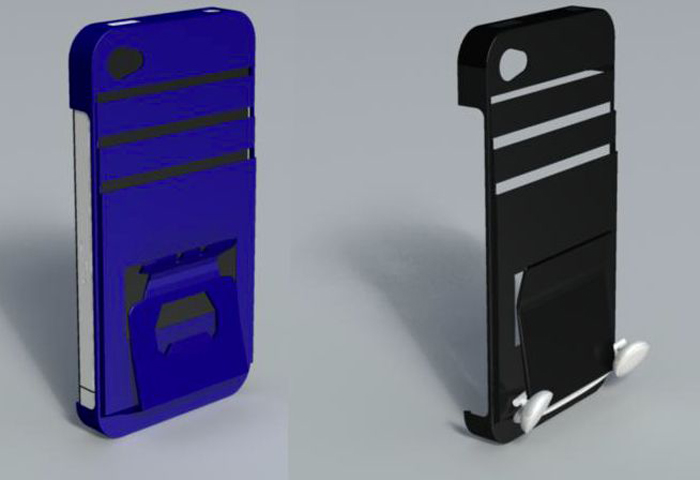 Fernando Sosa is a 31-year-old 3D artist based out of Orlando, Florida. Graduating with a degree in 3D animation from the University of Central Florida, 3D printing wasn’t his original passion. It was only when he needed a very specific sort of iPhone case that he was turned onto the burgeoning consumer tech, saying, “I wanted and iPhone case that didn’t exist, so I created one that fit my needs.” After designing the 3D printed iPhone wallet– which carries all of your credit cards, cash, and even headphones, in one place – the artist started to embrace the technology. 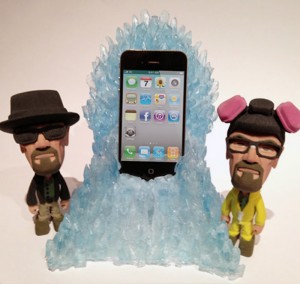 Like the rest of the world, Fernando became a Breaking Bad addict.  And, like the rest of the world, he wanted a Breaking Bad toy.  While Toys R Us may have backed down from putting out figures from the beloved show, Sosa did not.  When he couldn’t find any that he liked, he made his own, introducing him to the Colorjet Printing technology on Shapeways.

It wasn’t until Chris Christie was exposed for shutting down the Washington Bridge that he learned of the expressive power that 3D printing could offer him.  He tells me, “When Chris Christie came out during that press conference, I had the idea of making a figure of him with a cone on his head, working the cones.”  The subsequent print went viral, leading Sosa to expand his collection with the Putin butt plug. Later, he went on to create a whole series of butt plugs undermining the extreme right.  From Republican leaders to fascists, like Kim Jong Un, he had poured out countless models, walking a fine line between caricature and political expression. 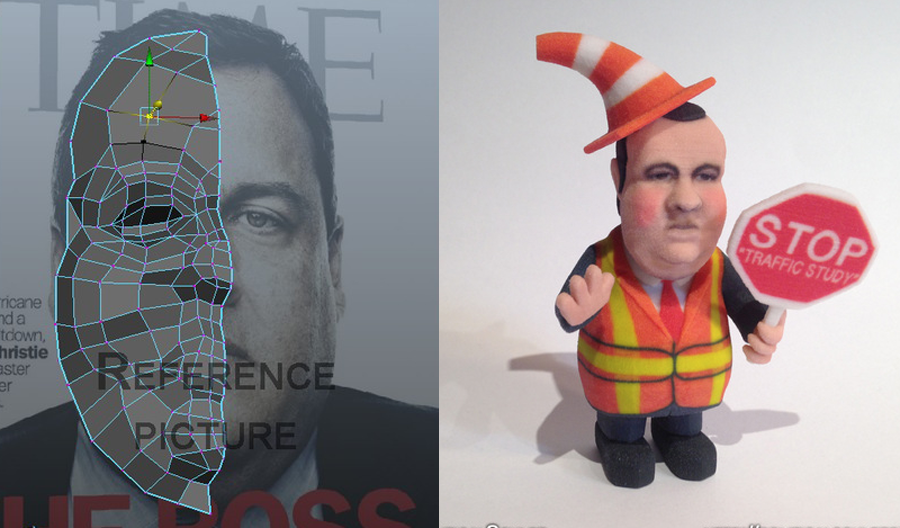 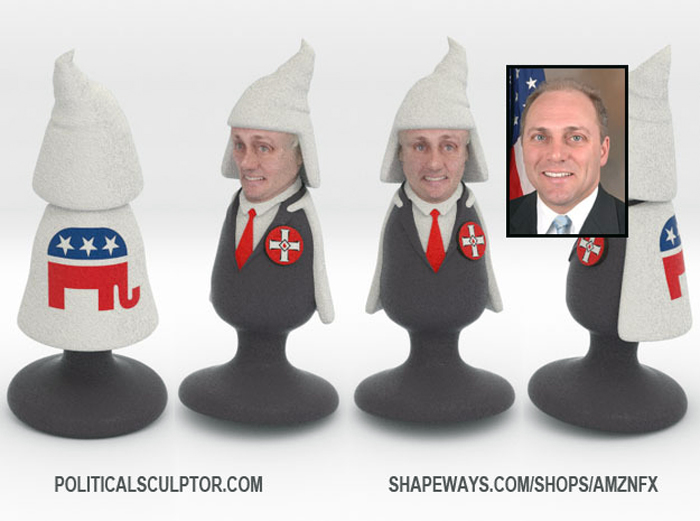 Fernando Sosa, though, continues to make his voice known in the way that he can, through his art.  Though he hasn’t yet written a description beneath his recent Scalise piece, he is quite vocal with his other products.  For instance, in the description of his “Begnazi!!” butt plug, Sosa writes: 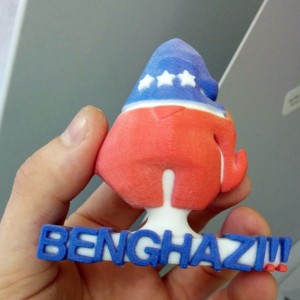 “Republicans have been screwing the middle class for decades, and, now, thanks to their intense gerrymandering and Koch brothers-style multimillion dollar “donations”, they no longer have to worry about losing campaigns. They now focus on making their billionaire buddies richer and richer. They manage to keep the masses from rioting by constantly distracting them with fake scandals.. They want to turn Medicare into a coupon system? Benghazi!!.. They want to abolish Social Security? Benghazi!!.. They filibuster a multi-billion dollar bill aimed at helping veterans they created? IRS!! I mean Benghazi!! Benghazi!! This butt plug pretty much represents what the Republican Party has been doing for decades… Screwing the middle class.”

As many of his political figures represent the Republican Party, I wondered if he was, instead, a die hard Democrat.  So I asked.  He responded, “I’m a liberal, so I’m to the left of the Democrats.” To express this, he’s been considering making an Obama butt plug, too.  He explains, “I was really pissed when he signed the Crombnibus Bill with Wall Street giveaways. I was this close to making one, but Obama is not anti-gay, so I think Republicans would be the only ones that would be happy if I make it.”

Designing a butt plug might be a silly/dirty way to express oneself, but Sosa’s modern political cartoons are more than crude jokes.  The artist has heart and soul.  I was really touched by one design of his, in particular, that is accompanied by a heartfelt plea for the benevolent treatment of animals: Sham-u the Sad Clown the More Accurate Orca Toy. I can’t quote the whole passage here, but, below his print, he writes: 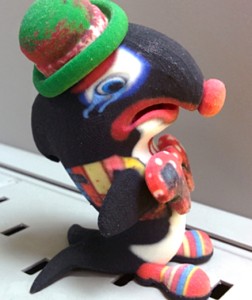 Just imagine you were put in a cell so tiny you could barely walk around. In our human jails, we at least have yards and basketball courts. Not even the biggest water parks in the nation have the equivalent of an extra bathtub for animals the size of a killer whale. So, imagine you were put in a room that size and you are to stay there till you die or one of your killer whale friends kills you. Now, imagine you are forcibly impregnated (because your babies are worth their weight in gold). Then, when your kid is born, they are immediately taken from you and sold to another park across the nation to be treated as a clown for the rest of their life, just like yourself. So, think, after all that, would you enjoy doing tricks to entertain a bunch of tourists? I think not. I think, after all of that, most humans would curl up and die or wish for such luck. However, instead, you are forced to do tricks to entertain masses of people like a freaking clown over and over and over for the rest of your life…

Let’s talk about the reason I made this piece. One of the best ways that owners of these Sea Animal Purgatories stuff their pockets with cash is to merchandise the images of their prisoners in the form of cute little figurines and plush animals… I like to believe that, if these animal abuse souvenirs were more accurate and depicted how the sea animals are forced to entertain you like sad little clowns at the expense of their happiness and freedom, kids wouldn’t nag their parents to buy them…

Existing in a shop like Shapeways, the Sham-u print doesn’t seem like the sort of thing that you’d really want to buy.  As powerful as it is, it doesn’t have the same jokey appeal as a Putin butt plug.  So, what’s going on here? I asked the artist his motivation for pursuing these works. To which he replied, “To just bring attention to issues I care about.  To influence people who normally wouldn’t care about such issues and force them to read about them.”

Attached to a system that brings him attention for his humorous butt plugs, Fernando throws in sociopolitical commentary.  And, with “3D printing” currently acting as one of the hottest SEO keywords driving Internet traffic at the moment, he attempts to use the system to amplify his voice and steer traffic towards his important and valuable opinions.  We’re driven to these sorts of tactics in a social structure that lacks true representation, where the media obfuscates the truth, and where it’s almost impossible to bring any amount of sanity to this schizophrenic collective.

And Fernando Sosa continues to try to rig the system back in his favor, employing new tactics to make himself known in the endless noise generated by the greater culture.  Sosa had hopes to design a series of characters from The Wire and Game of Thrones.  He first pursued legitimate channels to have them made, by contacting the licensing department at HBO and showing them his Breaking Bad prints, made via Shapeways.  They sent the following response:

Your company is too small at this time to warrant a license with HBO. We are operating a multi-million dollar licensing program and we seek licensees who have established track records, sound financial footing, experience in licensing and the ability to mass produce product and deliver it to retailers reliably. Your company does not meet those criteria.

The 3D printed products you have showed me lack the polish that we look for in licensed merchandise. We work with several licensees who use 3D printing to prototype products and we have seen the limits of the technology. It’s our opinion that at this time, most 3D printed items that we see don’t have the high quality we look for in our licensed merchandise. While injection molding is certainly far more expensive from a tooling and set-up perspective, the resulting product meets our production criteria and our partners can produce huge quantities at affordable prices with a good economy of scale. 3D printing is certainly growing in leaps and bounds, but right now the results just aren’t good enough for us.

While HBO may not be a fan of his prints, actors from Breaking Bad are.  Below are Daniel and Luis Moncada, aka “The Cousins” or Leonel and Marco Salamanca, posing with their doppelgangers. 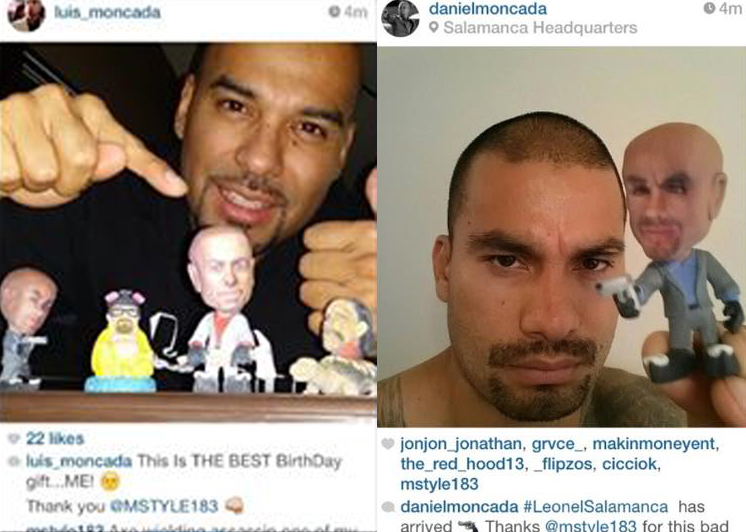 To spite HBO, Sosa created a DIY Iron Throne from Game of Thrones with his desktop printer. When I asked him if I shouldn’t quote him about HBO, he told me, “Na it’s cool. Screw HBO. Greedy company.” 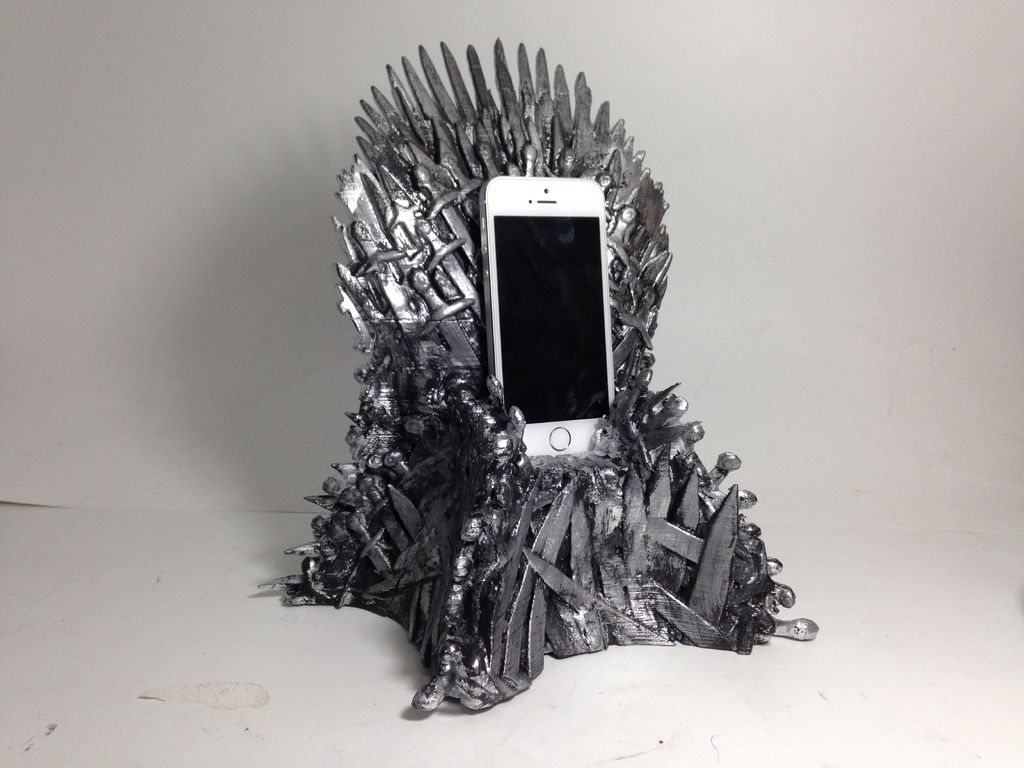