Picture the Moon: With an Affordable 3D Printed Telescope

In yet another trailblazing moment, the University of Sheffield released the first photos of space taken with a 3D printed telescope. The ramifications for this success hopes to echo other strides in technology that brought science from universities and financially elite institutions to the hobbyist. With the aid of 3D printing, Sheffield innovators sought to bring the wonders of the cosmos to enthusiasts wanting to take their own images of the celestial heavens.

The two parties responsible, Institute of Physics member, Mark Wrigley, and University of Sheffield Physics and Astronomy research associate, Andy Kirby, provide a clear insight into their intentions and use of 3D printing. The design is available online and can be printed for roughly £100 as opposed to the £800 one might have to shell out for traditional models of equal capability. Called the PiKon, the name is a portmanteau from an alternative spelling of “icon” and the Raspberry Pi camera that resides in the telescope. 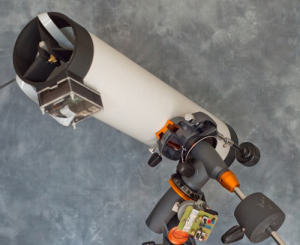 The PiKon, complete with a magnification of times 160, works with a Newtonian concave mirror. An image forms onto the Pi camera sensor from whatever the telescope is focused on. The size made possible with 3D printing allows the camera to be mounted directly in front of the mirror. All this information and logistics translates to the ability to capture the moon and on clear nights detail galaxies, star clusters, and planetary observation as well as the possibility to “stack” and compare images. As a result, one may scan space for unusual occurrences like comets.

Mark Wrigley spoke frankly about the project, “We’ve called this project Disruptive Technology Astronomy because we hope it will be a game changer, just like all Disruptive Technologies. We hope that one day this will be seen as on par with the famous Dobsonian ‘pavement’ telescopes, which allowed hobbyists to see into the night skies for the first time. This is all about democratizing technology, making it cheap and readily available to the general public. And the PiKon is just the start. It is our aim to not only use the public’s feedback and participation to improve it, but also to launch new products which will be of value to people.”

This is not an app, this is grand abilities now ready to be printed and used on a scale previously unavailable. PiKon is part of the Festival of the Mind which promoted its space theme with a musical performance by 150 musicians of Gustav Holst’s symphonic suite “The Planets” in a pop-up planetarium. PiKon will make its rounds on a tour that involves over a hundred cities, academics, and artistic collaborations bursting with motifs of change, chaos, global, joy, resilience, and urban. Space, our final frontier, is ready for a closer look with a little help from 3D printing.