Photon – A 3D Scanner on Indiegogo

Steepening the already surprisingly positive trend curve of emerging reasonable – i.e. affordable – prosumer/consumer 3D scanner projects in 2013, out comes the Photon from Matterform. It is intended to provide the user with a simple one-stop – or one-click – solution for creating a 3D digital model from a physical object, without compromising on quality whilst still keeping the price tag low.

All of the hardware and software are reportedly created in-house from scratch by the inventors-slash-entrepreneurs themselves. The outcome of all of this is a rather impressive looking device, which should also fit most desks with ease – in terms of space consumption and aesthetically. The tech behind the Photon consists of a high-definition camera and dual laser lines that aim to complete the scanning process done in three minutes. The size limitations for scan-able objects are 190mm x 190mm x 250mm. File type wise, Photon scans can currently be saved as .STL, .OBJ or .PLY 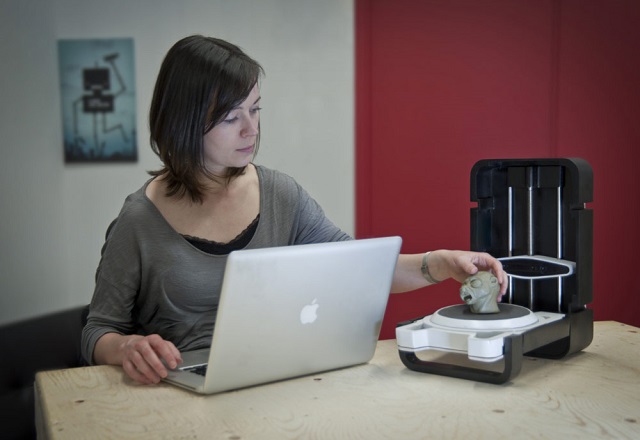 The project is currently seeking funding on Indie GoGo, but at the success rate suggests the scanners will be shipping this summer. The guys behind Matterform, Adam Brandejs and Drew Cox, were initially aiming for C$81,000, but have already hit almost double that – C$161k (rated almost 1/1 with USD) with 23 days to go. The most affordable – and quick – pledging deals have already sold out, but with C$449 you can still get your hands on the Photon in September of this year.

We’ll be eager to see if this will be the first actual commercial 3D scanner success of its kind, as it really seems to tick all the relevant  boxes, but will reserve judgement until we see the Photon in action ourselves.

Watch the guys’ pitching the Photon in the pledge video below.