3D scanning is slowly becoming an actual thing! And by 3D scanning I mean low-cost, consumer-friendly, and, most importantly, mobile 3D scanning. The Structure 3D scanning sensor killed it on Kickstarter and was later snatched up by 3D Systems to be transformed into the iSense. Paracosm, previously covered on 3DPI, has increased the options for mobile 3D scanning by releasing its tablet 3D scanning package to the public. 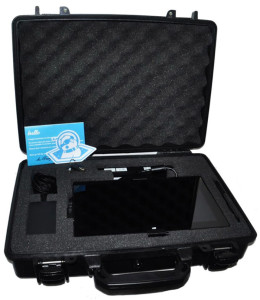 Paracosm is a web-based 3D scanning platform that uses a Kinect, or similar scanner, to capture data from the environment and render it as a 3D model. The company behind it hopes to make it so that everyone in the world can scan everything in their environment and upload it to the net, creating an accurate, 3D map of every single thing around you. To accomplish this adventurous task, the company has started shipping its first starter kits. The kit includes a tablet, scanner, the Paracosm software and a 6-month subscription to the company’s cloud-based services for $2999 (Remember: it includes a tablet!). In order to see how impressive the software really is, check out the 3D scan here on their 3DShare site.

You might hold out on purchasing the Paracosm kit, though, if you’d rather wait around for Google’s Project Tango. As discussed in the promo video below, Project Tango uses two cameras and applies Paracosm-like technology to an Android phone to allow for the 3D scanning of the world around you. In fact, according to the scanning firm’s site, “Paracosm contributed dense mapping to Google ATAP’s Project Tango, which is real-time mapping of complex and arbitrary indoor scenes in variable lighting conditions. In addition to the UI and integration, we worked on the core technology. At Paracosm, this technology contributes to our own 3D reconstructions/models.”

Here’s the dumbest, or possibly the smartest, way that people might use this technology: to create 3D models of their homes, which they can then import into games like The Sims and play out their lives even more virtually. Then, they’ll hook an Oculus Rift up to their Facebook Sims App, live in a fake version of their real world and interact with avatars of their friends. When they get bored of that, someone will create a virtual Paracosm in the Sims world, as well as a virtual Oculus Rift headset, with which to virtually use a virtual, virtual reality helmet to trap themselves in an endless loop of samsara.

Thus, those people not sucked into an eternal recurrence in a virtual world, will be able to walk around a less busy real world! Maybe.