This 3D printed dynamic partial finger prosthetic uses living hinges and complex geometry to create a prosthesis that will print in as a single part. The prosthetic finger was printed in nylon, and is flexible enough to bend appropriately, but sturdy enough to be functional.

Maker Sean Blaine designed his Origami Finger prosthesis because he was simply unable to afford the cost of a functional partial finger prosthetic. Blaine is a realtor by trade, but considers himself a maker at heart. After he had his idea to 3D print his finger, Blaine gave himself a year to complete the project. He estimated that the prosthetic took about 200 hours design time with Wings3D, and between all of the test prints and prototypes an additional 400 hours of machine print time. Blaine completed his finger in thirteen months.

The prosthetic was printed in Taulman3D Nylon material because when the item being printed is designed correctly, it will be very flexible, but can also be engineered to remain stiff and form a rigid body. This requires an ordered structure, like a cylinder or a cone, and will be combined with the living hinges that allow the finger to bend. This living hinge should have a thickness of about .5 to 1.0mm and should have a strength of about 50-100 lbs. Once he had a design that he was happy with, Blaine printed the finger himself on his MakerBot Replicator 3rd Gen 3D printer.

“The prosthetic consists of one n(>3)-fold taurus configured with rigid bodies  — tubes and cones — and flexible nodes (living hinges).” Blaine explained to me via email. “[This] is a game changing design concept that is only available through 3D printing. Rather than simple geometry and multiple parts one can use complex geometry and a single part. I think a clever designer could print a single piece single material above the knee or elbow prosthesis with all the mechanical properties and motion of an organic limb.”

Blaine graduated from the University of Minnesota with a degree in Applied Design and specialized in sculpture and 3D design. He has always been artistic, and considers himself a builder by nature, so he was ideally suited to develop his Origami Finger. 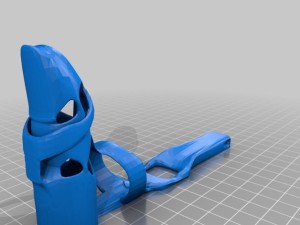 The concept for the finger prosthetic came to him while he was talking to his father, and at the time was not a serious idea. But while he initially laughed it off, it turned out to be an idea that he came to realise was something that he could actually do. You can find the 3D model for the Origami Finger on Thingiverse.

3D printing models that have complex, movable geometry is potentially one of the more interesting ways to create 3D printed prosthesis. And the idea has tremendous potential for partial amputees in less developed parts of the world who could never dream of having a prosthetic device. While he is currently very happy with his Origami Finger, Blaine isn’t done yet because he is currently working on an Origami Thumb.