A team at the Naval Surface Warfare Center (NSWC) Carderock has created a scale model of the hospital ship named USNS Comfort using 3D printing technology. The state-of-the-art 3D printer used, one of four in the US, enables Carderock to deliver large, complex models of ships, which can be assembled faster than before and fabricated unattended around the clock.

According to Francisco “Paco” Rodriquez, NSWC engineer, “3D printing technology is currently being used in industry to produce parts, structures and models for various applications. For more than a century, Carderock engineers have been at the forefront of technology in delivering ship models in order to build the Navy’s future fleet. This next generation technology provides Carderock unprecedented capability to deliver fabricated ship models faster and at a more affordable cost for the Navy.” 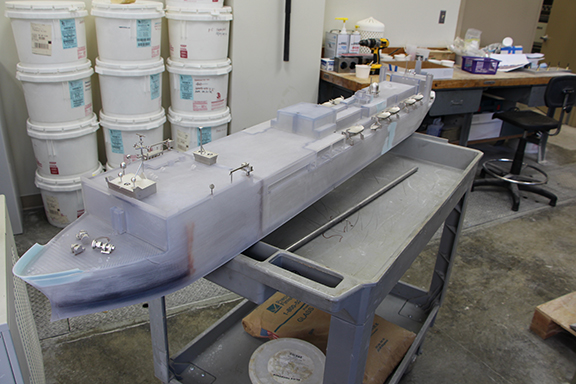 The model testing of USNS Comfort (T-AH 20), conducted together with Naval Air Systems Command and Military Sealift Command, will take place in the NSWC Carderock Anechoic Flow Facility. It is a closed loop wind tunnel that has the ability to quantify aerodynamic and acoustic properties of a scaled ship or an aircraft model. The aim of the test is to measure the airflow of the wind measurement sensors installed on the structure of Navy ships.

According to Joshua Butler, Naval Systems Command engineer, “The results will determine a usable range of wind directions for the anemometers to help ensure safety while launching and recovering aircraft. The wind indications within the established usable range are used to provide wind speed and direction measurements to aircraft.”

“The model of the T-AH 20 was created within 25 days. Prior to the installation of this 3D printer, we would have conducted four different builds in the previous machine followed by attaching all of the components together, resulting in more than double the time to reach completion. Not only was less time spent building, but now the model will have fewer seams than before,” said Rodriquez