Hidden behind the debates regarding 3D printing and patent law – is it good? is it bad? is it a sandwich? – is a 31-year-old New York patent lawyer named Martin Galese that brings a sense of humor and delight to the world of intellectual property.  Martin runs a tumblr called Patent-Able. 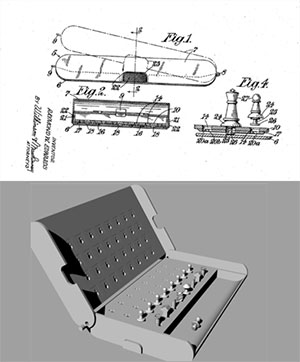 At first, Patent-Able might resemble an online chapbook curated by McSweeney’s, with diagrams of antiquated devices from the late 19th century, but it’s not.  It’s a series of designs from expired patents that the lawyer has converted into .stl files.  You’ll see a drawing for a travel chess set from 1948, taken from the U.S. Patent Office, followed by Martin’s own 3D rendering of the device, which he has posted on Thingiverse for all to print and download.  He describes his endeavor in this way:

The basic idea of a patent is that you get a limited period of exclusivity in exchange for public disclosure of your invention.  But what good is that public disclosure sitting in the specifications of 8,000,000+ patents?

I’m looking for the cool, weird, and the surprisingly useful in the greatest repository of public domain prior art ever created, the U.S. Patent and Trademark Office. 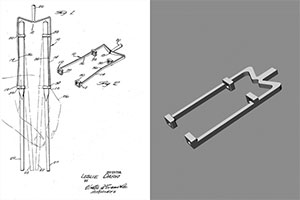 As if from a Pixar movie about forgotten inventions, Martin has taken these quaint and seemingly useless devices and given them new life with 3D printing[1]. Before affordable desktop printers arrived on the scene, these chopstick holders would have been lost in the folds of time.  But, thanks to Martin, your grandparents will have no more excuses not to try sushi.  One Thingiverse user says that the legal jargon attached with each patent is their favorite part, including such gems as this filing for U.S. Pat. No.  1,346,729, a reinvented bookmark from 1920: 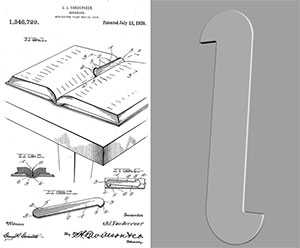 “To all whom it may concern: Be it known that I, JEAN, J. VANDERVEER, citizen of the United states, residing at Brattleboro, in the county of Windham and State of Vermont, have invented certain new and useful Improvements in Bookmarks; and I do declare the following to be a full, clear, and exact description of the invention, such as will enable others skilled in the art to which it appertains to make and use the same.”

I can’t help but agree, as I have never heard the phrase “I do declare” used anywhere else outside of the context of a Foghorn Leghorn cartoon.

You might go to Galese’s blog for the .stl files, but you’ll stay for the tidbits of knowledge you’ll gain from a trained patent lawyer, such as this:

Copyright arose initially as a way of imposing government control over the disruptive technology of printing presses. Patent may well be the tool used to impose control, governmental or quasi-corporate, on 3D printing.

And if you support gun control, for example, *and* get excited about the possibilities of home printing in metal or some more durable material, you should start thinking about how you control a device that can be used to build unregistered copies of a device you don’t even know about.

Because there will be some sort of regulation. Pretending otherwise just leaves a tilled garden for noxious weeds of special interests to regulate.

I do declare! I think this blog post is giving me the vapors! But, before I go, I’ll leave you with something the lawyer told the New York Times Bits Blog, because Galese’s got a pretty good way with words and 90’s movie analogies. This is Martin’s concern regarding the 3D versions of the old designs that he’s created:

“There is so much more design in our world, so many more objects,” he said, chuckling at the comparison to the movie, “Jurassic Park,” in his work.

“There’s always this question: did they bring back what was actually a dinosaur or something they thought was a dinosaur?”

Hat Tip to Ralph Pearson of the 3D Printing Guild Group on LinkedIn.

[1] By publishing this idea where everyone can see it, I have first dibs on the copyright for any Pixar movie that may be released, including anything titled Patent Story, Trademarked, or The Wonderful World of Intellectual Property.