The Pearce Research Group at Michigan Tech has made yet another significant step in making 3D printing a more sustainable practice.  Though the university lab has made a good deal of progress in developing low-cost 3D printing hardware – including a plastic-recycling filament extruder, a solar-powered 3D printer, and a sub-$2,000 metal 3D printer – some of its most important contributions to the sustainability movement lay in research and standards.

Not only has Dr. Joshua Pearce and his lab authored studies elucidating the extreme cost effectiveness of 3D printing, over direct purchasing, consumer goods and lab equipment, but the professor’s group has also published a fair trade filament standard, to push for ethical feedstock production.  Now, Michigan Tech News reports that Dr. Pearce, along with his students Emily Hunt, Chenlong Zhang, and Nick Anzalone, has taken to enhancing the effectiveness and efficiency of plastic recycling, particularly in the US, by redefining plastic recycling standards that the entire 3D printing community can adopt.

In an open access paper published in Resources, Conservation and Recycling, Pearce, et al. dissect the US’s classification system for plastics and compare it to the system used in China.  While China categorizes polymers using 140 different codes, covering a wide variety of plastics, the US only uses seven, which leads to insufficient recycling practices as distinct types of plastic, like ABS and PLA, are grouped within the same codes.  The authors write:

The current recycling system is extremely limiting as there are many more commonly used polymers. Other systems have adapted to materials diversity. For example, China’s polymer identification system has seven different classifications of plastic, five different symbols for post-consumer paths, and 140 identification codes [55]. The U.S. system is particularly lacking when put in the context of a growing trend of distributed 3-D printing for manufacturing plastic products. There are simply not recycling codes for the majority of 3-D printing polymers in the U.S. system, while these same plastics are covered by China’s system. Today, this additional plastic waste is minor, but with the growth of 3-D printing it has the potential to represent a significant environmental burden.

To alleviate the problem, Pearce and his students created a new resin code identification system using the Chinese system as a reference.  The system includes commonly used 3D printing plastics, but leaves room for new materials that may be developed in the future. 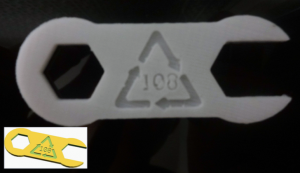 As well as creating this resin ID system, the authors also wrote a programming script for OpenSCAD that would print the code onto an object made with a specific type of plastic.  That way, when in-home or local recycling becomes widespread and thorough or when centralized recycling becomes thorough enough to handle a diverse selection of plastics, separation and subsequent recycling will be handled more effectively.  Though it may be difficult to push large associations, like the ASTM, to adopt the codes, Pearce’s lab hopes that Makers will do so and, with the code provided by the group, they urge the adoption of the coding system by 3D printer manufacturers and those working on open source slicers, like Slic3r, Cura, Skeinforge, etc.  The paper explains:

The recycling code system developed here is a voluntary system for which prosumers will implement for their own benefit. Thus, it avoids the challenges associated with exporting waste plastic internationally. Although, the estimated sales of personal 3D printers from 2007 to 2011 was 346% each year [9], today the total prosumer plastic waste is still a tiny fraction of a percent of the U.S. whole. Until distributed production and recycling have become the norm, improvements are needed in the U.S. system. In order for the sum total of U.S. recyclable plastic waste to be recycled, particularly in the short term, the U.S. resin code must be expanded and adopted by the plastic industry as a whole. For this to happen legislation is needed to make it mandatory at the national level, as unlike the prosumer-based system investigated here (where recycling by being in line with the prosumer’s economic interest), the centralized system externalizes costs to such an extent that the economic incentive is lost. Currently, the recycling code in the U.S. is changed and regulated by the ASTM, a non-profit private organization that focuses on developing international standards [78]. In order to expedite this change the responsibilities of expanding the codes and regulations on recycling should be investigated by government at the national level, similar to the policy implementations in China [79]. By enabling the government to regulate recycling codes, the market can operate more efficiently as full costs will be accounted for in transactions, and economic incentives can be aligned with the benefits to the environment and the rest of society.

While we push the government to investigate recycling standards, the open source community and Makers can begin incorporating Pearce’s codes into their own software and 3D printed products.  And, as the 3D printing revolution kicks into full steam, we may be able to tackle the waste problem generated by this technology before it gets as bad as the waste problem created by practices surrounding mainstream technologies.