Nascent Objects analyzed close to 600 widely used consumer electronic products across the world, from home security cameras to WiFi speakers; each one is packaged and sold separately from one another. You may be surprised to learn that they found about 15 total electronic modules could build a vast majority of these various electronic products (about 80%).

After launching an Indiegogo campaign (which is about $10,000 away from their $70,000 goal) and showcasing their early successes at CES 2016 in Las Vegas, Nascent Objects has announced that they are utilizing the technology of the 3D printer manufacturer EnvisionTEC to help create their 3D printed electronics.

“We have developed very innovative 3D printing intellectual property but we are not a 3D printing company, in the sense of someone that sets out to 3D print prototypes or parts,” said Nascent Objects CEO Baback Elmieh. “What we set out to do is make consumer electronics into a system that is sustainable, reusable, and able to really overcome the barriers to building a consumer electronics product. 3D printing just happened to be the best way to get that done.” 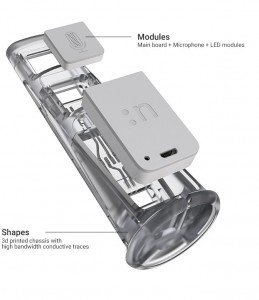 Mixing their metallization technology with the prototyping capabilities provided by the German-based EnvisionTEC’s 3SP 3D printing system, Nascent Objects is already featuring one modular system on their IndieGoGo that can be transformed into a security camera (Coucou), WiFi speakers (Red), or even a water usage monitor (Droppler). Elmieh and his team turned to EnvisionTEC due to their compatible 3D printing process and for having the best price-to-quality ratio on the 3D printer market.

Nascent Objects’ technology enables them to generate metal circuitry, which is then embedded into 3D printed polymer parts. These electrical lines can carry signals up to 2Ghz, as well as 120 Watts of power. The consumer would  simply insert the necessitated module into the 3D printed shell of their choice. Nascent Objects’ CEO Baback Elmieh refers to these 3D printed ‘endostructures’ (or chassis of each product) as ‘apps’, each of which use the same modular system to perform different functions. He also believes that this simple modular system can bring over 100 other electronic products to life.

“The issue is always manufacturing,” Baback said, “Because you have to build them separately, you can’t just turn one product into another. So, we built a system where the last gadget that you’ll ever have to own is actually the components inside all your products.”

This seems like a much more economically sound manufacturing method when you compare it to the traditional process, which repeatedly produces the same modular system over and over for different functions. There are a number of electronic products that are under-produced or unused, but by mass producing the modular system and custom 3D printing the actual shell of the “apps”, Nascent Objects can ensure that their electronic devices are produced in accordance with market demand. Whether you’re monitoring your house with their Coucou HD Security Camera or your water usage with the Droppler, all of it can now be done with a single modular system.