In August of last year, we released a story about how chief scientist of synthetic biology at the NASA Ames Research Center, Lynn Rothschild, and her PhD student, Diana Gentry, were working on a project to 3D print “biomaterials out of thin air.” The team has been hard at work, using the $100,000 from their NIAC grant and have relayed some of their progress towards 3D printing synthetic biomaterials using cellular arrays.

Not dissimilar from other methods of bioprinting, the researchers believe that they can 3D print cellular arrays that will secrete organic materials like wood, mineral parts of bone and tooth enamel.  As Rothschild puts it to TechCrunch, “Cells produce an enormous array of products on the Earth, everything from wool to silk to rubber to cellulose, you name it, not to mention meat and plant products and the things that we eat. Many of these things are excreted (from cells). So you’re not going to take a cow or a sheep or a probably not a silk worm or a tree to Mars. But you might want to have a very fine veneer of either silk or wood. So instead of taking the whole organism and trying to make something, why couldn’t you do this all in a very precise way – which actually may be a better way to do it on Earth as well – so that you’re printing an array of cells that then can secrete or produce these products?” 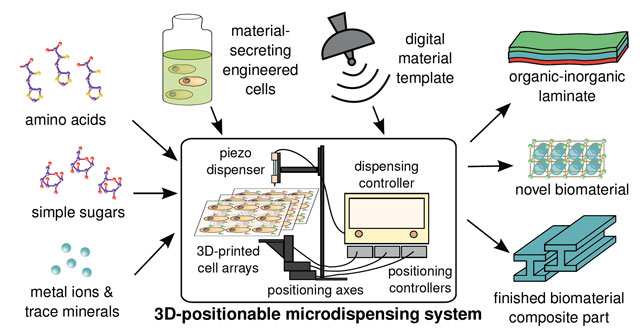 At the moment, they are in the process of developing a large database of cells found in nature and bioprinting the arrays, attempting to secrete specific materials. The duo infuses cells into a gelling solution, which is then printed through a piezoelectric print head into a three dimensional pattern. As Organovo, and other bioprinting researchers, have pointed out, organic cells are more viable in a 3D pattern, as it more accurately resembles the natural environment. While other bioprinting researchers may try to place organic cells into a specific pattern and induce cellular growth, what differentiates Rothschild and Gentry’s technique is that they are attempting to trigger cells into becoming a material of their choice.

Gentry explains where the difficulties lay in their research: “If you looked at a piece of plastic, by and large, a small piece of it is just like a large piece of it; this is not true of most biomaterials. They have very interesting properties and structures on a micro or sometime molecular scale that stack and create these sort of emergent macro-scale properties. So they behave differently in different directions. We are trying to show that we can manufacture these materials so that those really fine-grained properties work for us.”

The team believes that they are well on their way to a proof-of-concept by the project’s deadline in October of this year. If they can pull it off, they hope to be able to produce unique materials, like carbon reinforced wood or wood infused with copper nano-wires, with Gentry saying, “I want to see if I can add a new class of materials to the palette of materials that people make things out of.”