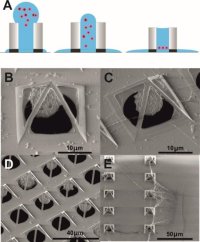 The living cells are in a field full of pyramids on a micro scale, each “open pyramid” containing a cell that can interact with others. The findings of this new technology research is published in Small journal this month.

Most of these cell studies take place in a 2D environment, which is not a natural situation for cells in the human body. When you give the cells room to move in three dimensions, the natural situation is approached in a better way while capturing them in an array. And this is what this research has achieved in the ‘open pyramids’ fabricated in the MESA+ Institute for Nanotechnology NanoLab.

The technology used to achieve this is known as “corner lithography”, which allowed researchers to bring together a number of planes, made of silicon for example, in a sharp angle, and apply a film of another material to those planes. Once the film is removed a small residual amount of material remains at the tip. This tiny residual material provides the base for constructing a minuscule pyramid, which can be used as a tip for an atomic force microscope.

Further research will develop this method to explore the possibility of writing fluids at the nano scale.

The researchers also investigated whether the pyramids, attached to a membrane, can act as tiny cages. Since this process was found to be successful with microspheres the scientists went further to experiment with chondrocytes, the cells that produce cartilage. Capillary fluid flow causes the cells to drop into the cages through a hole in the underside. Compounds and protein-like deposits were soon seen forming between cells in nearby pyramids. Changes in cell phenotype can therefore be studied better than in a flat plane, as this provides the right way to grow cells. This yields a promising tool for research into areas such as tissue regeneration.

The researchers expect there to be multiple different ways for developing this technology.