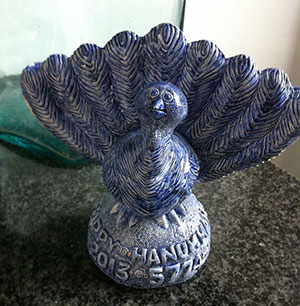 Thanksgivukkah: the traditional US and Canadian holiday celebrating the time when the Jewish pilgrims sat down to dinner with a local Native American tribe. Though it was only meant to last one evening, the feast lasted eight whole nights because everyone was having such a good time and they had all of that magic oil left over from their last event. This is one of many myths that can be created this year thanks to the fact that, for the first time ever, the first day of Hannukah will fall on the same day as Thanksgiving. That’s right, this November 28th marks the first Thanksgivukkah in history! 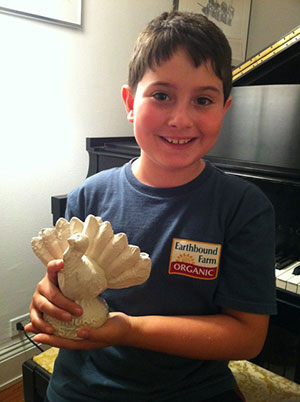 To celebrate this serendipitous event, one 9-year-old named Asher created the perfect holiday item: the Menurkey, a combination menorah and turkey. Asher ‘Tinkercadded’ up a 3D model of a turkey turned candelabra and, because his parents wanted to cultivate his creativity, they had a prototype printed at Makerbot Studios. Connie Smith, a ceramic artist on Etsy, helped refine the design a bit in plasticine. And, though the family didn’t quite have a kosher menora, both because the wicks of the menorah’s candles weren’t level as tradition dictates and because Thanksgivukkah is listed nowhere in the Torah – they went to Kickstarter to fund the production of ceramic, glazed and plaster Menurkeys in white and blue. The Kickstarter was a huge success, earning almost twice its goal at $48,345.

Now, because of this little boy’s genius and his parents’ thoughtful exploitation of that genius, we have a brand new symbol for our brand new holiday.  Here’s the video for the already funded Kickstarter below:

I’m still looking for an .stl file for the combination menorah + flightless bird so that I can print one myself.  I know that I should pay the $50 to support the entrepreneurial spirit of a 9-year-old, but I just don’t know if I can rationalize spending money on something I won’t use again for another 70,000 years, when the next Thanksgivukkah rolls around.  Besides, November 28th is also my brother’s birthday, so I’ll need to create a Menurkey with Ethan’s head on it, anyway.

To hell with it, Thanksgivukkah only comes once, probably, ever. I should treat myself to a nice, blue Menurkey and maybe even see if they’ll do a custom order for my brother.