Last week I got a lead about a new design app for 3D printing that essentially ‘makes the whole thing more accessible and is really easy to use.’

I’ll confess, my first reaction was similar to every time I have heard that before (as I am sure yours may well be) in that it was along the lines of: “Another one???” The lead came from a colleague that had got wind of this at the Inside 3D Printing event in NYC a couple of weeks back and I dutifully followed up on it. I did a quick scan of the site and subsequently invited my contact, the man behind ‘Mecube’ — Janos Stone — to speak to me at a time to suit. He agreed. But my week was even more insane than usual so I did not get a chance to carry out any further recon ahead of our scheduled call.

As the time of the call approached I downloaded the app to my phone via itunes but a crashed computer prevented me from getting anywhere close to familiar with it before Janos and I started taking. As it happened, this was extremely fortuitous. I explained to Janos as he came on line that I had just opened the app for the first time. He said, “perfect – let me walk you through it.” What followed was a really enlightening 15 minutes or so. And not once did I feel out of my depth. Mecube is accessible — it is so simple and straightforward I can do it! And what’s more I liked doing it. And even weirder still, I’ve been doing it ever since, of my own free will! My son (8) and niece (6) are currently addicted to it. Even my mother (60+!) is quite taken with it.

So what is Mecube? Well, it’s a voxel based mobile design app that offers an easy way to learn about 3D modelling and 3D printing designs in full colour from an iPad or iPhone — it is for anyone and everyone, and I can testify to that. It really is quick to learn and intuitive to use as you keep building. It’s a bit like virtual lego — you choose the colour of your cubes, you decide where to place them, and you can choose their shape and angle (up to a point, determined by whether or not it is 3D printable). This is because the models created in Mecube are specifically designed for 3D printing — fulfilled with a few clicks within the app by Shapeways 3D Printing service. Shapeways will print and ship your design following payment by Paypal. The images below show the 3D printed model of the 3D design in the feature image box above: 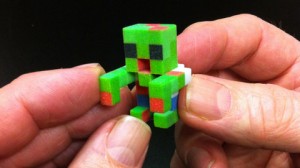 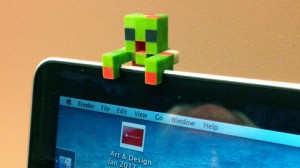 So after 15 minutes of playing with MeCube as Janos explained the interface and the tools, how to save, how to view other designs at Shapeways, how to change the size of my model and how to place a 3D printed order etc, I did ask about the idea and where it had come from.

Janos explained to me his background as a student of both fine art and 3D design and how he became aware of 3D printing in 2005. He started using it in his work soon after, however being also involved in education Janos was conscious that 3D design was restrictive when it needed to be much more simple and approachable.  “There was no truly easy-to-learn 3D design software and certainly none that connected people directly to 3D printing. I saw an opportunity to use my skillset to add to the growing potential of 3D printing by building software to connect the average person to 3D printing.”

The idea for Mecube originated about 5 years ago as Janos was working on a specific piece of artwork. The premise for it is that anyone can do it — but to achieve what he has with Mecube Janos has had to throw everything he knew about 3D design away. “I started from zero, purposefully throwing out all of the standard tools and user experiences that make large 3D design software cumbersome to learn. In the end, Mecube has only what I determined would be the three most important tools needed to build the most expressive and creative 3D objects: Color, Add/Subtract and Skew (bend).” To be clear this is not what people are used to — this is no SketchUp or Tinkercad.

To sum up, Mecube’s stand-out features are:

My recommendation is that you download the app and try it for yourself.